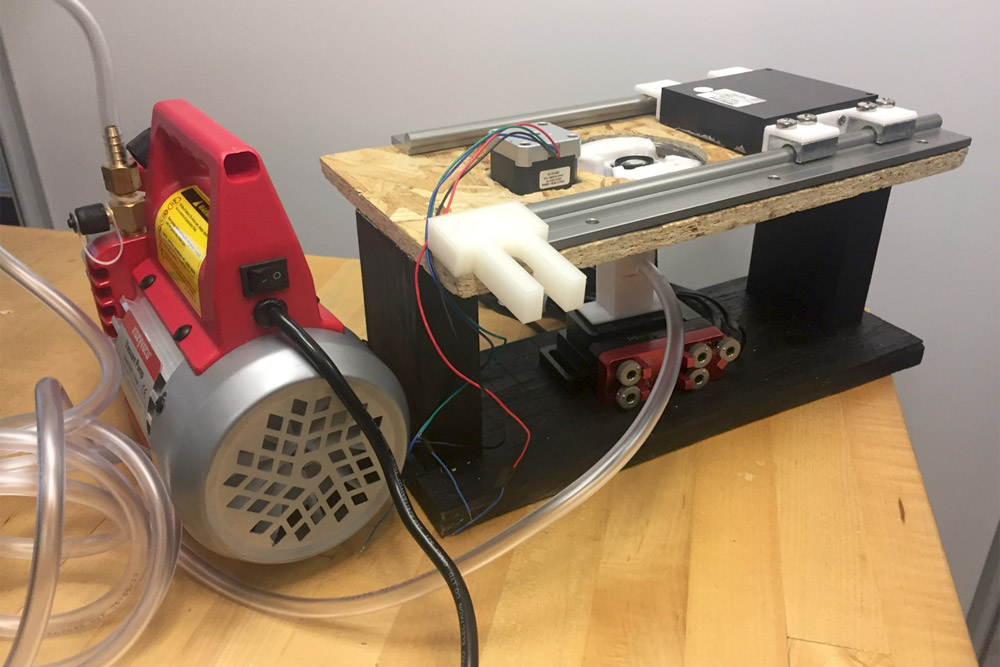 A UTDesign senior capstone team won a national championship for its design of a tool that improves the assembly of in-car and body cameras. The team’s prototype helps ensure that the camera is properly aligned during assembly.

The first-place team designed a tool to help corporate sponsor Motorola Solutions in Allen, Texas, improve the assembly process for the in-car and body cameras it manufactures for law enforcement agencies.

The second-place team designed a device to assemble custom blister packs, a type of packaging for pills, for sponsor Klöckner Pentaplast in its Charlottesville, Virginia, location.

The honors continue UTDesign’s winning streak in a year when the capstone projects were disrupted by the COVID-19 pandemic. The national competition, usually held in June, was postponed until October and moved to a virtual format. Winners were announced in November.

“One thing that I found remarkable about both of these teams is that they completed their reports for the competition and submitted them last spring amid all the uncertainty just as the University was transitioning to online learning. I told the teams that we did not expect them to continue with the process, but both elected to go ahead.”

“One thing that I found remarkable about both of these teams is that they completed their reports for the competition and submitted them last spring amid all the uncertainty just as the University was transitioning to online learning,” Hart said. “I told the teams that we did not expect them to continue with the process, but both elected to go ahead.”

Motorola Solutions asked the UTDesign team to build a prototype of a semi-automated tool to help its employees align and focus the cameras during assembly. Leo Barajas BS’20, who organized the team for competition in the fall, said the project required a concrete understanding of optics, software and mechanical design.

UTDesign helps companies expand their resources by partnering with computer science and engineering students at UT Dallas. Learn more about the benefits of becoming a company sponsor.

“The team worked through many project challenges,” said James Hoglund, mechanical principal staff at Motorola Solutions. Barajas said he and his teammates spent long hours working on their solution, which was almost finished before the shutdown.

“We demanded the most from one another, and it prepared us for something nobody predicted — a global pandemic. The last three months took an adjustment, but that is what engineering is all about,” Barajas said.

“This win is important on a personal level, too, because I have not found a full-time job, like many other recent graduates, and that’s OK,” he said. “The year 2020 has taught us that so much is out of our control; however, there is still much to be thankful for. I have my health, a bachelor’s degree and a national championship!”

The second-place team designed a prototype packaging device that can count, sort, package and seal pills into a custom blister package. Sponsor Klöckner Pentaplast asked for the user-friendly device that gives pharmacies the ability to provide blister packaging for individual prescriptions. 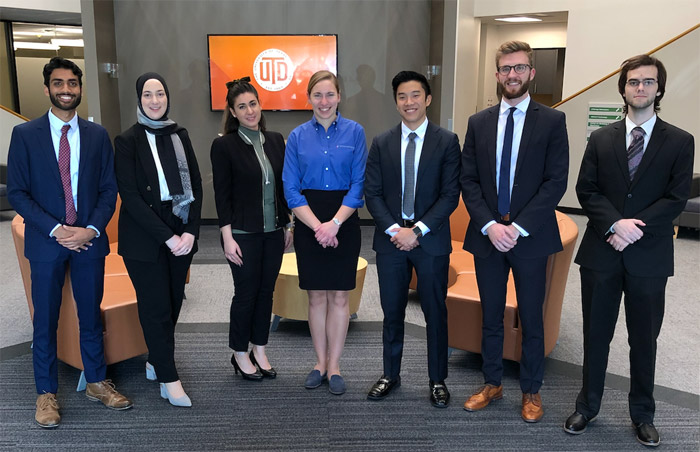 “We had worked relentlessly through the 2019-20 design season to complete this project. Our team faced many difficult challenges and obstacles throughout the project, which lead to the cultivation of our growth and bonding as a team,” said Jason Kwan BS’20, who now works as an engineer at Samsung Austin Semicon-ductor. “I believe this is one of the most important experiences of the UTDesign program.”

“Since we are not local, our project team had the unique challenge of all virtual interactions through the development process, but they did a great job communicating nonetheless, which turned out to be perfect preparation for the rest of 2020,” Stewart said.

UTDesign engineering students were only weeks away from finishing their senior capstone projects for sponsors when a shift in campus operations in response to COVID-19 abruptly forced them to stop working. 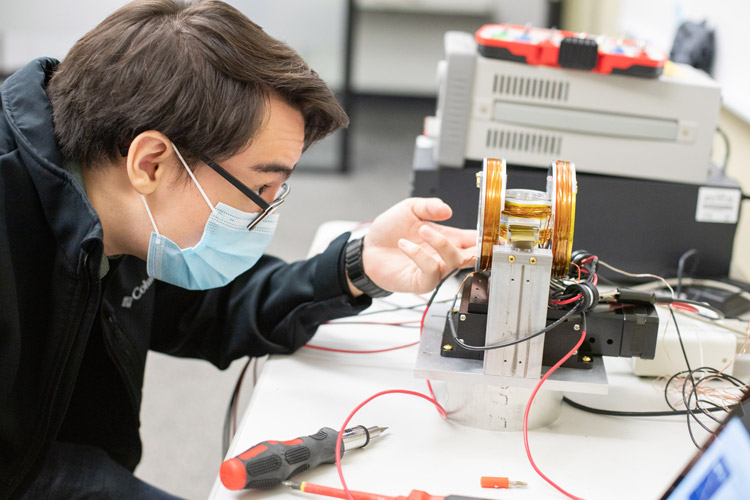 Jayson Van Marter BS’20 and his teammates worked throughout the fall to complete a project for sponsor Texas Instruments.

When The University of Texas at Dallas moved to virtual classes in March, some UTDesign sponsors picked up where students left off, while others elected to restart projects with future students. Four teams, however, volunteered to come back this fall to complete their work, even though most of the students had earned their degrees and started graduate programs or new jobs.

“We are happy to have been given the opportunity to continue our work, as we felt bummed to have to stop when our team was very close to completion,” said Jayson Van Marter BS’20, a team leader who is now an electrical engineering doctoral student at the University.

The UTDesign Capstone course gives Erik Jonsson School of Engineering and Computer Science seniors the opportunity to work with faculty and corporate mentors on real-world problems for sponsors. Van Marter and his teammates spent many weeknights in the UTDesign Studio designing and building a device for Texas Instruments Inc. that simulates the effects of semiconductor packaging. The goal is to help the company better understand and compensate for mechanical stress on semiconductor devices.

Jihad El Allami BS’20 and her team were committed to finishing their tool that helps older adults work on lower extremity strength and balance after surgery. The project was sponsored by Dr. Courtney Balentine, assistant professor of surgery at UT Southwestern.

“Working on something with hospital staff was everything I wanted,” said El Allami, who is on course to earn her master’s degree in biomedical engineering next year through a fast-track program that allows students to earn bachelor’s and master’s degrees in five years.

Once the team completes the project, the next steps will be to manufacture and pilot-test the device, Balentine said.

“The students have done a great job; they’re very excited and very energetic about the project,” Balentine said. “The coronavirus disrupted everything for everybody. I’m happy they were able to come back and work with us and keep things moving.” 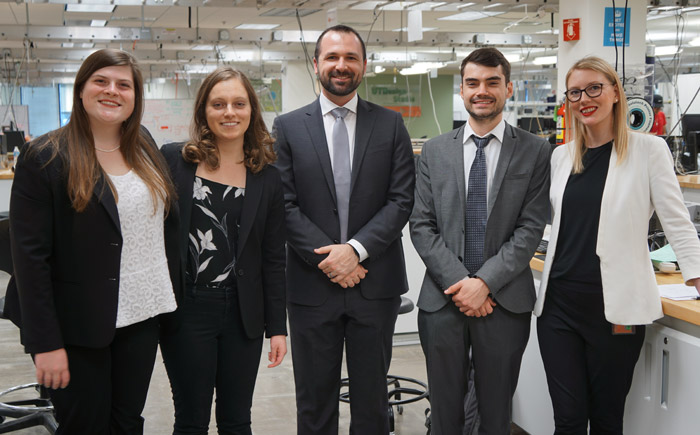 Team leader Joe Epperson BS’20, now a biomedical engineering doctoral student, said his team also wanted to see its project through to completion. He and his teammates are finishing work on a device that uses lights and sound instead of fake blood to help train the public on how to control bleeding in emergencies.

Dr. Gilberto Salazar, an associate professor of emergency medicine at UT Southwestern who has sponsored several UTDesign projects, said the team has made “remarkable progress.”

“When COVID-19 hit, everything came to a screeching halt, and unfortunately the teams were not able to complete their projects in the agreed-upon timeline, but it’s remarkable that Joe’s team volunteered to complete the project,” Salazar said. “They’re right back at it, and they’re doing it on their own time, unpaid. I think the final product is going to be phenomenal. This device will be directly responsible for saving many people’s lives in the near future.”

Another student team designed and built a prototype device for CPI to test hydrostatic bearings. These bearings use a circulating fluid rather than rolling elements like ball bearings to improve the accuracy of the pointing and tracking systems in large telescopes, such as those at the Gemini Observatory and the Deep Space Network, as well as the Galileo National Telescope.

“I’m interested in the space aspect of engineering, so I enjoyed working on the project the entire time,” said Ryan Kropp, mechanical engineering senior who plays on the UT Dallas men’s golf team. “After giving so much of my time to the project, especially considering how close we were to being done, I wanted to see it through.”

Samuel Beyer, mechanical engineer at CPI, said the company will use the students’ design to test new hydrostatic bearing designs for more sophisticated antennas and telescopes in the future.

“The team was able to seamlessly transition to a remote worksite to complete the report on time,” Beyer said, adding that he was thankful for the team’s “extra effort to finish the project under extraordinary circumstances.”

“The shutdown was a worst-case scenario if you’re an engineering student. You have studied and worked for three years and are nearing the end of your capstone project. Even worse, you’re at the part that most students like best, which is getting to build the prototype they have designed,” Hart said.

The experience taught students valuable lessons about dealing with unexpected changes and how to collaborate remotely, said Dr. Todd Polk, associate professor of practice and UTDesign faculty director for bioengineering.

“The fact that these four teams wanted to come back shows a whole lot of commitment, dedication and drive to finish what they started,” Polk said. “I am very proud of them.”