Carla Ramazan, a senior at The University of Texas at Dallas, has been passionate about women’s health and reproductive freedom her entire life — and it stems from personal reasons.

Her family is from Romania, which for decades under Communist leader Nicolae Ceausescu had outlawed access to abortion and contraception in a bid to boost the country’s population. Ramazan’s aunt died while getting an illegal abortion. 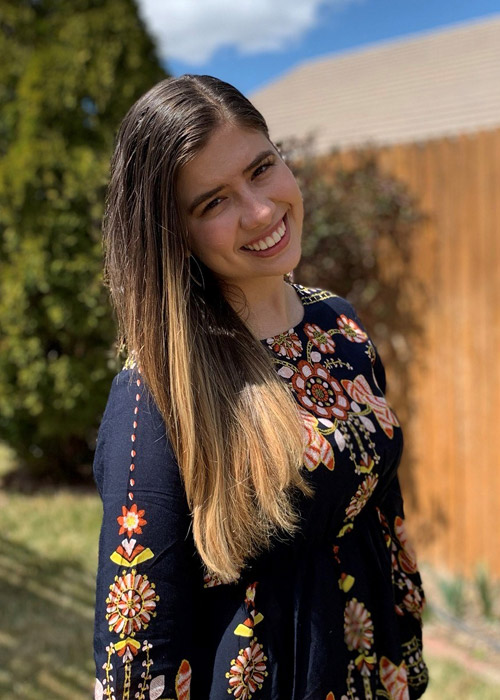 “I wanted to prevent that from ever happening to others,” Ramazan said.

Her passion and leadership in organizing students at UT Dallas and elsewhere to advocate for reproductive rights has now been recognized with the distinguished Harry S. Truman Scholarship.

A political science major in the School of Economic, Political and Policy Sciences and a Eugene McDermott Scholar, Ramazan joins an elite group of 62 Truman Scholarship recipients from across the country this year.

The Truman Scholarship, which provides a $30,000 grant for graduate study, is awarded annually to a select group of college students interested in pursuing careers in public service.

Dr. Douglas Dow, associate dean of the Hobson Wildenthal Honors College and clinical professor of political science, said UT Dallas has had a strong presence in the Truman Scholarship program, with two winners and six other finalists in the last 10 years.

“It’s clear that UT Dallas is giving students who are interested in public service the kind of mentoring they need to get to the final round,” Dow said.

The Truman application is one of the most difficult of all the distinguished scholarships, Dow said, because students need to show not only why they are committed to public service, but also provide details on how they have shown leadership by the time they’re a junior in college.

“There’s a difference between being responsible and trying to do everything yourself, and being a leader who gets others to do what they would otherwise not have done. That’s the Truman challenge, as I see it,” Dow said.

As an Archer Fellow, Ramazan spent the fall 2019 semester in Washington, D.C., working in the campaign department for NARAL Pro-Choice America. She reached out to college campuses and provided resources for students to become active.

“It was so great to see how many students are passionate about reproductive freedom,” Ramazan said.

“Carla’s passion for service to others, combined with her tremendous intellect and desire to achieve academic excellence, are the epitome of what this award stands for. Her activism, leadership and dedication are inspiring. I am excited to see her continue to grow as a young scholar and public servant in the coming years.”

On campus, Ramazan organized a UT Dallas chapter of Deeds Not Words, a statewide nonprofit organization founded by former state senator Wendy Davis to galvanize young women in advocating for access to reproductive health and freedom from sexual assault.

“I saw the need to have student groups at UT Dallas that were focused on women’s issues,” she said.

As a member of the UT System Student Advisory Council, Ramazan presented to the Board of Regents the group’s recommendations for free speech on campus.

Each new Truman Scholar receives up to $30,000 for graduate study. Scholars also receive priority admission and supplemental financial aid at some premier graduate institutions, leadership training, career and graduate school counseling, and internship opportunities within the federal government. Recipients must be U.S. citizens, have outstanding leadership potential and communication skills, demonstrate academic excellence, and be committed to careers in government or the nonprofit sector.

She also served as vice president for Student Government, helped create a video on bystander intervention that targeted sexual harassment, participated in Model UN and was an officer in the campus chapter of No Labels, a political action coalition.

“Carla’s passion for service to others, combined with her tremendous intellect and desire to achieve academic excellence, are the epitome of what this award stands for. Her activism, leadership and dedication are inspiring. I am excited to see her continue to grow as a young scholar and public servant in the coming years,” said Boots, who is also a professor of public policy and political economy.

Ramazan plans to apply to law schools in the fall and will use her scholarship toward furthering her career goal of becoming an attorney and one day working for Planned Parenthood or the American Civil Liberties Union.

Ramazan is the third UT Dallas student to receive the Truman Scholarship. Matthew Salm BS’18 won the scholarship in 2017, and Sophie Rutenbar BA’06 was a recipient in 2005. Both were also McDermott Scholars.

Rutenbar went on to earn master’s degrees at King’s College London and the London School of Economics and Political Science and now works with the United Nations.

Salm went on to earn a master’s degree in global affairs from Tsinghua University in Beijing, where he studied as a Schwarzman Scholar. He now works in Wisconsin as an investment analyst with The Milwaukee Company. Salm also uses sports as a vehicle to advocate for food policy changes needed to protect the planet. He is seeking to qualify as a speedskater for the U.S. Olympic team in 2022.