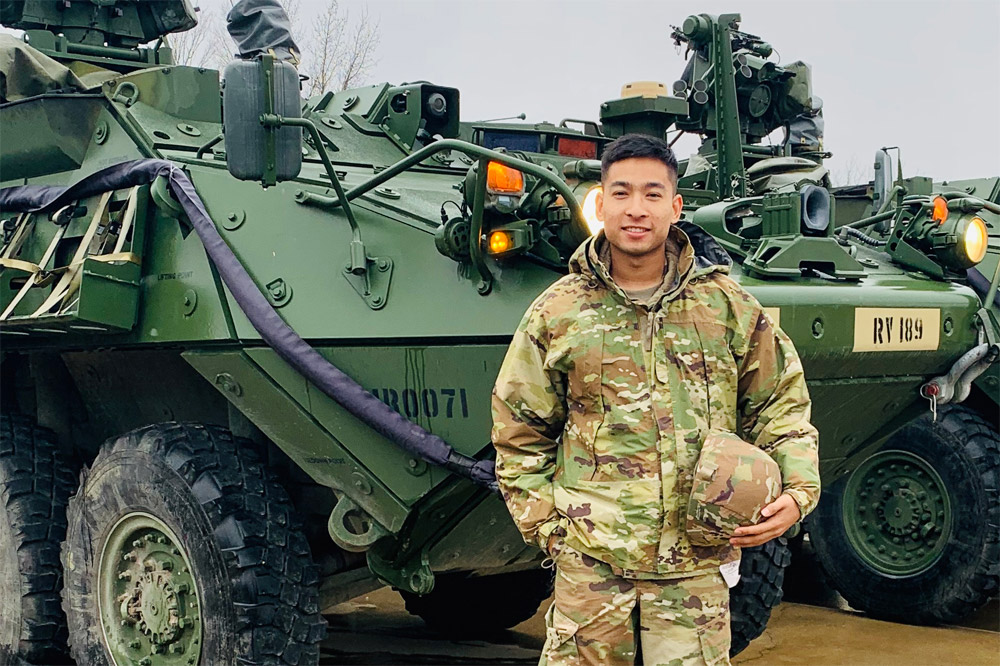 Before the COVID-19 outbreak, UT Dallas software engineering senior Yugesh Taksari spent a weekend a month with the U.S. Army Reserve Training Center in Texarkana, Texas, where he served as a chemical, biological, radiological and nuclear specialist. He shifted to online classes and conference calls with the Army Reserve after the outbreak.

Software engineering senior and student veteran Yugesh Taksari has managed to balance his duties in the Army Reserve with his coursework at The University of Texas at Dallas — all while maintaining a 4.0 GPA.

Since the COVID-19 outbreak, he has spent one weekend a month in online classes and conference calls with the U.S. Army Reserve Training Center in Texarkana, Texas, where he has been a chemical, biological, radiological and nuclear (CBRN) specialist, working against the threat of CBRN weapons and weapons of mass destruction.

Taksari will be recognized along with other military and veteran graduates with a special cord to honor their service. Students who serve or have served in the U.S. military are traditionally invited to wear the special red, white and blue honor cord at commencement in recognition of their service. Due to the campus closure, however, the annual veteran cord ceremony has been suspended this year, and the UT Dallas Military and Veteran Center instead will mail the honor cords to students.

“I’m so happy I chose UT Dallas. The Military and Veteran Center is a big reason.”

A native of Nepal and a first-generation college student, Taksari came to the U.S. in 2014 to begin his higher-education career at a school in Oklahoma. He joined the Army in spring 2016 because of the education benefits veterans receive. At the time, he was taking chemistry classes, so an Army liaison suggested he specialize in defending the country against CBRN weapons.

Taksari transferred to UT Dallas in fall 2017 but was called up the next spring for six months of Army training at Fort Jackson in Columbia, South Carolina. Since then, he receives his training schedule each month and said UT Dallas faculty members have worked with him to accommodate his military obligations.

“If I know I will miss a test day, they will let me do it beforehand. And if I am away when an assignment is due, they will extend my due date a few days,” Taksari said.

At UT Dallas, he also found plenty of resources — from advising to professional development — at the Military and Veteran Center, which supports more than 600 military-affiliated students.

“I’m so happy I chose UT Dallas. The Military and Veteran Center is a big reason,” Taksari said.

In addition to his military service, Taksari has carried 19 credit hours each semester and also works as a math and English tutor at a private company.

The biggest challenge, he said, has been making the switch back and forth from civilian to military life on the weekends when he serves with the reserves.

“Here, you have to decide your own moves. There, a higher-ranking officer tells you what to do,” he said.

But his military discipline has served him well in his academic career. Taksari said he keeps a mental picture of class deadlines and has never missed an assignment. He sees other students who sometimes struggle with meeting grade requirements.

“They know the material but aren’t disciplined about meeting assignment deadlines. They struggle with timing,” he said. “I have had to find a balance. It’s one thing my family can be proud of.”

Taksari is interested in working in data science and cybersecurity, and has accepted a position as a software engineer with JPMorgan Chase & Co.