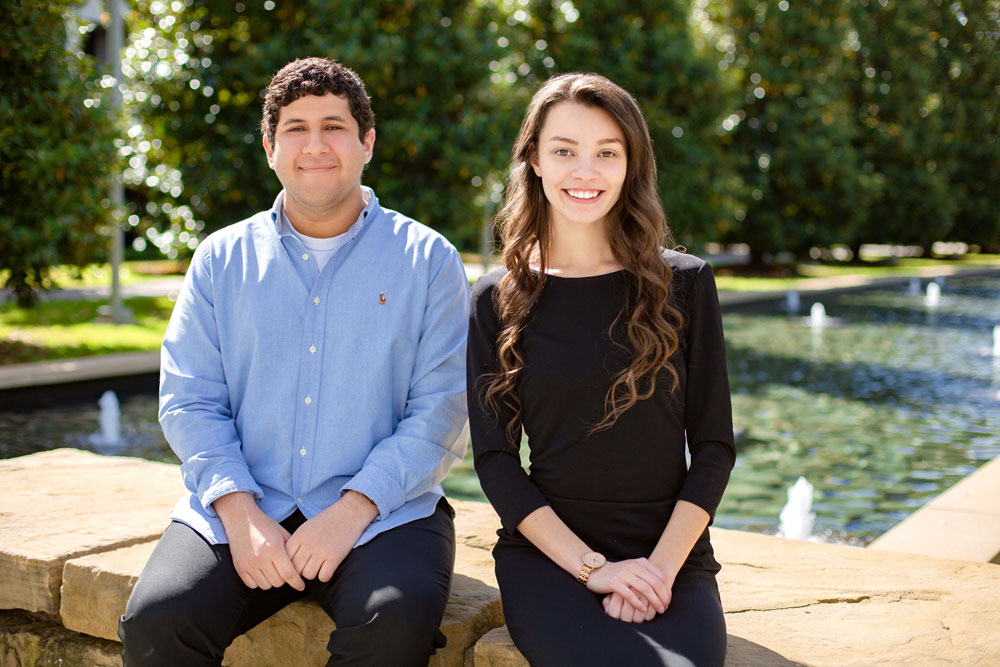 University of Texas at Dallas students have chosen candidates from opposing tickets to be their new Student Government leaders. The final votes were cast in a runoff for an election that featured the largest field of candidates in the University’s history.

Ayoub Mohammed, a political science junior from the Labor Party ticket, is the new president. Hope Cory, a public affairs junior who ran on the Tier One ticket, will serve as vice president.

In choosing Mohammed, students have elected a president with no previous Student Government experience for the first time. Last year, Student Government officers passed a resolution to open up the candidate process to students who have not previously served in the organization.

“I was actually very surprised I won,” Mohammed said. “I didn’t expect it to be as contested as it was. I was shocked that I got even more votes in the runoff.”

“Not every student wants to talk directly to Student Government, or if they see an issue, they might think it’s too difficult to go to the administration. We want to open that door for students, where people can easily tell us these things, and we can take it to the administration for them.”

Mohammed said he hopes his election as an outsider will encourage more participation in Student Government.

“I think Student Government should get out there more and engage with the constituents, get their faces out there and get to know the students,” he said.

Mohammed said he was motivated to seek office to support the rights of student workers, to promote greater visibility for Student Government and to improve administrative transparency.

The new leaders said they don’t anticipate challenges working together despite coming from different campaigns.

“I think both of our platforms have extremely important issues. We don’t think one platform is more important than the other,” Mohammed said. “We hope to maybe combine them and try to prioritize them and see which issue we can tackle first.”

Cory said the two had a meeting after the election, and “we just kind of clicked.”

“It wasn’t really on our platforms, but we’re both very passionate about Title IX education, mental health awareness and sustainability,” she said.

Cory, who was president of the student body at San Jacinto College in Houston before transferring to UT Dallas, said she felt adrift when she first arrived on campus.

“I think every organization can do more for transparency. We need to update students on projects they wanted. Maybe it was something that wasn’t going to work, but I think it’s still important to let people know we tried.”

Then Cory attended a “Meet Your Senator” event on campus and applied that same day to be a candidate. After she was appointed to Student Government and attended the organization’s retreat, she began to feel connected on campus.

“That’s when I felt, ‘I belong here. This is my UTD.’ I want to help create that sense as much as possible for students,” Cory said.

She ran for vice president this semester because she saw an underrepresentation of transfer students, student veterans and students with disabilities in Student Government.

Mohammed has the same passion for international students. After his parents emigrated from Jordan, he grew up in Arkansas and now lives in Plano.

“I know that whole ‘new-kid feel’ very well. I want us to be a helping hand for international students. I want them to know that someone is listening to their concerns,” he said.

Mohammed also hopes to serve as a liaison for students who may be reluctant to raise issues.

“Not every student wants to talk directly to Student Government, or if they see an issue, they might think it’s too difficult to go to the administration. We want to open that door for students, where people can easily tell us these things, and we can take it to the administration for them,” he said.

Both students hope to improve communication from Student Government by providing minutes of meetings and monthly project updates.

“I think every organization can do more for transparency. We need to update students on projects they wanted. Maybe it was something that wasn’t going to work, but I think it’s still important to let people know we tried,” Cory said.

Mohammed said he will work to promote greater transparency on issues that affect students.

“I’m opposed to keeping some sort of neutral stance and not voicing my opinions about things. It’s difficult to know what you can do exactly, but I think we’re going to do our best,” he said. “I want people to know as much as they can know.”

The mission of the Student Government is to ensure that UT Dallas is fully committed to serving the collective interests of the student body. In this capacity, it serves as the official student voice to UT Dallas administration, the UT System Board of Regents and other governmental entities.

Structure: The Student Senate is a diverse body of senators from each academic classification and school. With the exception of officers, each senator serves on a committee. Each senator is either elected or appointed to a one-year term. The president and vice president are elected by the student body. The secretary, treasurer and committee chairs are nominated and selected by the Student Senate.