Areeb Siddiqui, a May graduate in political science and economics at The University of Texas at Dallas, has received a prestigious fellowship from The Honor Society of Phi Kappa Phi that will further his goal of becoming an attorney specializing in civil rights. 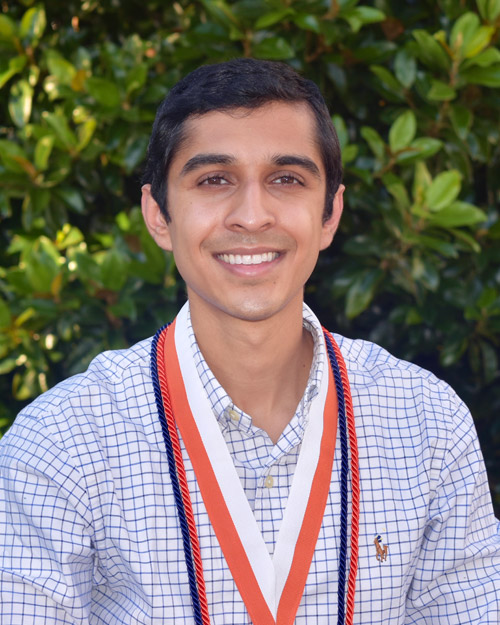 Siddiqui, who earned both a Bachelor of Arts and a Bachelor of Science this spring, will use the Marcus L. Urann Fellowship toward tuition at Yale Law School. He is one of six graduate students across the U.S. to win a $20,000 Urann Fellowship, given to Phi Kappa Phi members entering their first year of graduate or professional study.

An alumnus of the Eugene McDermott Scholars Program, Siddiqui is the fourth UT Dallas student to receive the Urann award. The Honor Society of Phi Kappa Phi also awards 50 fellowships of $8,500 each and two at $35,000.

“Areeb exemplifies everything we want in a student. This is an outstanding recognition of his academic achievements and his commitment to using his knowledge and skills in the fields of law, politics and economics to better our diverse communities,” said Dr. Douglas Dow, associate dean of the Hobson Wildenthal Honors College and clinical professor of political science.

Siddiqui, who is a Muslim from the Dallas area, learned early the value of community support in achieving his academic goals. At the same time, he was also aware that some young people in South Dallas weren’t afforded the same opportunities.

“Segregation robs people of the beauty of community, both for those who are pushed out of opportunities and for the privileged who never get to know their neighbors. We grow from connecting with people who are very different from us,” he said.

“Areeb exemplifies everything we want in a student. This is an outstanding recognition of his academic achievements and his commitment to using his knowledge and skills in the fields of law, politics and economics to better our diverse communities.”

At UT Dallas, a variety of academic experiences deepened Siddiqui’s passion for justice. He spent a semester working for the Brookings Institution in Washington, D.C., through the Bill Archer Fellowship Program for Undergraduates, where he participated in conversations about how to address economic inequality.

During an internship at the Federal Reserve Bank of Dallas, Siddiqui started reading about civil rights cases, segregation, financial discrimination, and redlining and racial zoning in Dallas. He became motivated to help engage other students at UT Dallas in issues that affect the surrounding community.

Siddiqui helped organize the Dallas Urban Futures Series, which offers conferences on topics such as white flight, police brutality and cooperative economics. The series’ first summit in May 2019 drew about 350 students and individuals from across the city of Dallas and was followed by a fall summit on criminal justice, a youth conference in November and an online summit last spring.

Although he eventually would like to help craft urban policy, Siddiqui said he is eager to get courtroom experience first, defending individuals who have experienced financial and housing discrimination.

“I’m interested in fighting discrimination at national levels. That would be a legal battle I’d like to fight,” Siddiqui said.

He credited his mentors at UT Dallas for helping to guide his academic and career interests including Dow, Dr. Jennifer Holmes, professor of political science, public policy and political economy and dean of the School of Economic, Political and Policy Sciences; Dr. Timothy Bray, associate professor of practice of public policy and political economy and director of the Institute for Urban Policy Research; and Sara Mokuria, the institute’s associate director for leadership initiatives.