For David Tigges, a technical sergeant in the Air Force Reserve, being on a college campus has been “a whole new world” compared to life in the military, but one that he learned to navigate successfully at The University of Texas at Dallas.

Tigges, who earned his bachelor’s degree in finance in August, was among 25 student veterans who participated this week in the seventh semiannual UT Dallas cord ceremony. The University had more than 720 veterans and current service members enrolled as students this fall.

Family and friends applauded as each veteran was called out by name, branch of service and academic degree. Dr. Hobson Wildenthal, president ad interim, presented each with a red, white and blue honor cord to wear at fall commencement ceremonies in recognition of his or her military service and academic achievements.

“It’s a time of camaraderie, a time for them to see other veterans who have the same goal,” said Lisa McNeme, assistant director of the Veteran Services Center. “It’s also an opportunity for us as a University to support these students. Every person in my chain of command — from the president on down — was here tonight. That means a lot.”

For Tigges, that cord represents more than 10 years of service, including three deployments to Iraq, where he worked in aircraft armament for F-16s and volunteered at a combat hospital. Numerous temporary assignments of a few weeks at a time took him across the world.

Serving as a reservist while taking college classes and working brought more than a few challenges.

“You have to switch gears for everything: school, job and the military. At first, I really liked the challenge of it,” he said.

Tigges began to feel the stress when he was undergoing a unit inspection while taking several classes, including Business Calculus II. When tapped for a military assignment, he often had to negotiate with professors to get an incomplete for a grade, rather than a failing mark for missing class assignments and test dates. 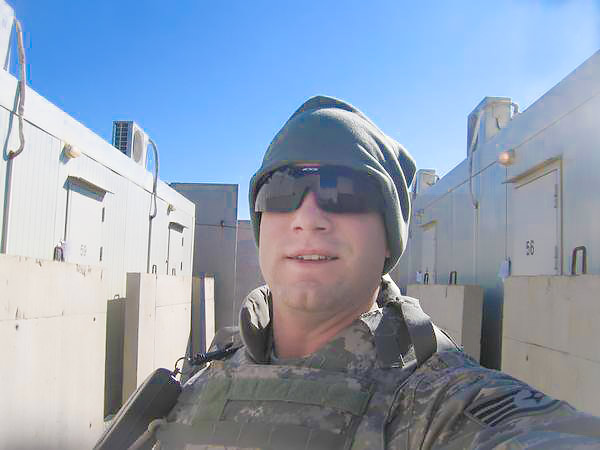 Tech. Sgt. David Tigges has served in the Air Force Reserve for more than 10 years, which has included three deployments to Iraq, where he worked in aircraft armament for F-16s and volunteered at a combat hospital.

Several UT Dallas faculty members were among his advocates on campus. Two of his finance professors, senior lecturer Frank Anderson and Dr. Jared Pickens (now with Texas A&M University-Commerce), attended the funeral of Tigges’ buddy and fellow classmate Jim Leddon, who died of a stroke in July at age 31.

“Jim was a colleague and friend, and he had also been in my unit,” Tigges said of their close bond. “We had a lot in common: He worked full time as a technical writer, was a reservist and went to school full time.”

The support of staff and faculty has meant the world to Tigges. He credited the Veteran Services Center at UT Dallas for helping connect him with resources and other veterans.

Not everyone in civilian settings understands the unique experiences of military life, Tigges said. He typically doesn’t tell fellow students he’s a veteran.

“I’ve always kept it quiet. I think people find it off-putting, and there’s a series of questions that come with it that you’d rather avoid,” he said.

But whenever he runs across another student veteran he recognizes the military training and bearing without having to ask.

“I don’t know what it is. Maybe it’s something in their presence, but I know right away they’re a veteran,” he said.

Tigges began the enlistment process at age 17. He was already familiar with military life. Several of his uncles had served and his brother was in active duty, working on B-52s.

“You have to switch gears for everything: school, job and the military. At first, I really liked the challenge of it.”

David Tigges,
a technical sergeant in the Air Force Reserve who earned his bachelor's degree in finance

He chose the reserves to see if he wanted to go active duty. Mostly, he wanted to travel and see the world. “College was not on my mind at the time,” he said.

Tigges said he looked forward to basic training and technical training. Coming off playing defensive end in high school football, he was already in great shape.

“I was physically and mentally ready,” he said.

He began working on F-16s, the most deployable aircraft in the Air Force, and soon discovered a fact about military life: “You go where the aircraft go.”

His experience in completing assignments served him well back on campus. Tigges often found his attitude toward class projects was more expedient than many of his younger classmates.

“Most veterans like to get started on projects earlier and gain advice rather than wait until the last minute,” he said.

Despite the challenges, Tigges wouldn’t change a thing. He still appreciates the experiences his reserve unit has given him.

“The good thing is you do get to switch lifestyles. It’s different to put on a uniform and work with technologically advanced equipment that you don’t encounter in civilian life. It’s really captivating,” he said.

He hopes to pursue an MBA in the near future. He has until July to decide if he wants to re-enlist.

Tigges said the transition process to civilian life has improved for military veterans, including incentives for employers to hire them, but added there’s still work to be done.

“When you’re enlisted and deployed, you are put in high-pressure environments at an early age. It’s a little different than an internship. I wish more employers valued that kind of experience,” Tigges said.