University of Texas at Dallas senior Angela Cheryl Willis joined the Navy at age 18 for one reason: She needed a way to pay for college so she could pursue her lifelong dream of a career in the arts. 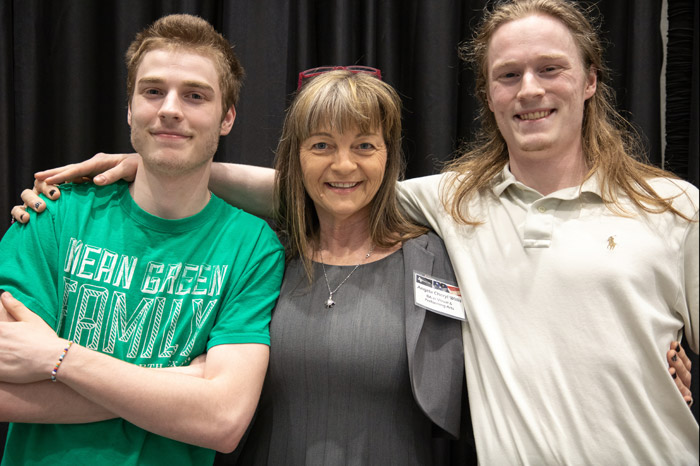 Angela Cheryl Willis, with sons Carson (left) and Connor, celebrated her upcoming graduation during the cord ceremony for military and veteran graduates.

Thanks to the military education benefits she earned from four years of active duty and two years in the Reserve, Willis started to work on her degree in 1987 but put schooling on hold in 1989 to start her family. Thirty years later, she has finally realized her dream by earning a bachelor’s degree in visual and performing arts from the School of Arts and Humanities.

Willis was recognized along with other military and veteran graduates during a special cord ceremony on May 6. Students who serve or have served in the U.S. military are invited to wear a special red, white and blue honor cord at commencement in recognition of their service.

“I’m so honored. Spending most of my life caring for my family, and happily so, I’ve always felt like I’m in the background. I’m not used to being catered to,” Willis said.

Since her adolescence, Willis said the arts have fed her soul — from community theater to music, photography and drawing. Though she wanted to pursue a career in arts and performance, her family couldn’t provide the financial means.

“I wanted to go to college, but there was no college fund for me. And my mother wanted me to pay rent. That wasn’t going to work,” Willis recalled.

After she saw the 1980 Goldie Hawn movie Private Benjamin, she thought, “Hey, that’s something I could do.”

Her father pleaded with her not to join the Army because he feared she’d experience combat, so Willis opted for the Navy. Boot camp was as hard as she expected, but the experience helped the 80 or so women in her unit to bond tightly.

“I’m a pretty stoic person. I was driven to get through boot camp and do whatever the commander told me to do,” Willis said. “They just tear you down to your core so they can build you up as a unit. When you graduate, you’re just in love with the others in your unit. These women became a part of my extended family.” 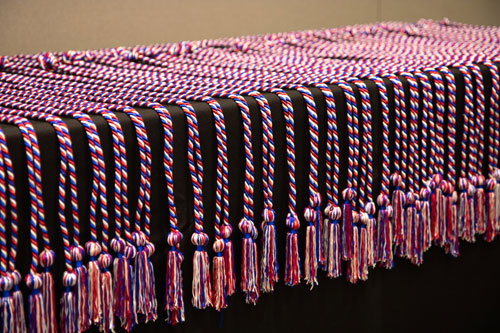 Her first duty station was in Pensacola, Florida, where she went to photo school. Willis married a fellow military recruit so they could be assigned to the same place at their next duty station. In haste, they tracked down a probate judge who owned a tire store, where they were married after paying their $20 fee.

Willis next was assigned to the Fleet Intelligence Center Europe and Atlantic in Norfolk, Virginia. After being given top-security clearance, her tasks included printing photos from satellite images.

As the couple’s family grew, Willis followed her husband’s Navy career around the world. They settled in Dallas after he retired. Though their marriage eventually ended, Willis has no regrets. She describes her five grown sons as “the greatest joy of my life.”

Willis then began to pursue her dream of working with the arts and passing that passion along to the next generation. She first earned a degree in commercial photography from Collin County Community College.

Though Willis’ military educational benefits expired in 1995, she tapped into a military program for unemployed veterans called Veterans Retraining Assistance Program in 2013.

When she transferred to UT Dallas, Willis said she could spot another military veteran right away: their meticulous grooming, their bearing and posture, and their thoroughness in completing tasks. That gave her a feeling of belonging.

“The thing with veterans, it’s like you’re already family. You have an instant connection. You let your guard down,” Willis said.

The Military and Veteran Center, which provides resources and support for veterans and military-affiliated students, gave her a place to land between classes and hang out with fellow veterans.

“It’s like a touchstone. It’s home here at UT Dallas. You have coffee, a fridge to put your lunch in, and a couch if you need a nap. I love the center,” Willis said.

Now that she’s graduating, Willis hopes to eventually open a preschool program that focuses on helping children appreciate and practice arts and performance.

“The arts give children the tools they need to handle their emotions, to stand up to bullies and to be creative and confident, even at age 5, in speaking before groups,” she said. “I want to give children a healthy way to live as a human, and tools that will serve them for the rest of their lives. The arts are a big part of that.”