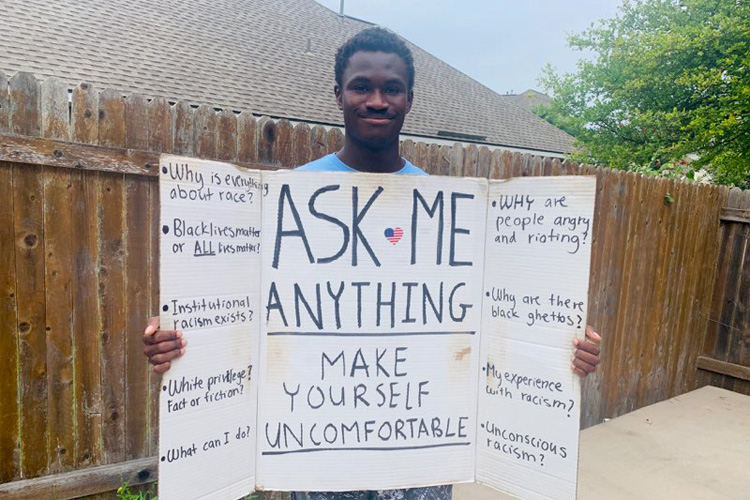 UT Dallas literature junior Nifa Kaniga wants to create deeper and more authentic conversations about race with his street campaign. “There’s a lot of misinformation on social media. People hide behind their screens and post nasty comments about Black Lives Matter. And the other side responds with, ‘That’s racist,’ or ‘That’s ignorant. Shame on you!’ People are a lot more behaved when you can talk to them in person,” he said.

A literature junior at The University of Texas at Dallas who was frustrated by the toxic rhetoric on social media launched a campaign this summer to engage people in face-to-face conversations about race.

Nifa Kaniga, who is Black, has taken to the streets three days a week from noon to sunset in his mostly white and conservative community of Dripping Springs, Texas, wearing a sign that reads “Ask Me Anything” and “Why are people angry and rioting?”

The response has been “very, very positive,” said the 20-year-old.

“I’m trying to give people an opportunity to learn rather than stay in the echo chamber that supports only what they believe,” Kaniga said. “There’s a lot of misinformation on social media. People hide behind their screens and post nasty comments about Black Lives Matter. And the other side responds with, ‘That’s racist,’ or ‘That’s ignorant. Shame on you!’ People are a lot more behaved when you can talk to them in person.”

His decision to start the campaign was prompted by the death of George Floyd and reaction to mass protests across the country. Kaniga wanted to make a difference by engaging people in more authentic and deeper conversation.

“George Floyd was the straw that broke the camel’s back for everybody. I just want to do my part,” he said.

Kaniga’s approach has garnered national media attention, as local television reports have been carried by CNN. He shrugs off the extra attention.

“This is an exemplary UT Dallas student: one who takes initiative, thinks deeply and positively engages his community in critical issues.”

“It’s been pretty interesting. I’ve seen a very rapid increase in followers on social media — I have up to 30,000 on Instagram now. But I’m still me at the end of the day,” Kaniga said.

What’s more gratifying is the response from people he meets on the street.

“People of different political ideologies and races are coming over and having a discussion with me, and I’m hearing them out. Most people are more confused and scared than angry, and this type of conversation pops that bubble they’re living in,” Kaniga said.

No questions are off limits for Kaniga. The Black Lives Matter movement, in particular, has raised questions from those in his community. To encourage conversation, his sign includes starter questions like “Why are people angry and rioting?” and “Why is everything about race?”

“It’s a platform to raise awareness of police brutality,” Kaniga explains to neighbors and passersby. “You can’t chastise anyone. It only makes them more ignorant. But after we talk, a lot will end up saying, ‘I never thought of it that way.’”

Dr. Jessica Murphy, dean of undergraduate education, said Kaniga reflects the values and goals that UT Dallas tries to instill in its students.

Comets Discuss: The Psychology of Prejudice

A Juneteenth Message from President Benson

A Message from President Benson: Living Our Values

“This is an exemplary UT Dallas student: one who takes initiative, thinks deeply and positively engages his community in critical issues,” said Murphy, who also is a professor of literary studies in the School of Arts and Humanities and the Mary McDermott Cook Chair for Undergraduate Education.

Kaniga hopes to become a high school literature teacher so he can encourage young people to close their screens and take up the “lost art” of reading.

“We’ve forgotten how to do that. Literature is a reflection of the world we live in. It helps us explore the human experience. Screens have replaced a lot of it because social media is easy to digest, and it’s a passive experience. You have to think harder when you’re reading a book,” Kaniga said.

Until he returns to campus in the fall, Kaniga finds it worthwhile to invest his time in helping people talk about racial and political issues.

“I just want people to have these uncomfortable conversations. If we don’t talk about it, we won’t have empathy for one another, and we won’t move forward together,” Kaniga said.