Jude Celiscar’s path to becoming a college graduate is as unlikely as any that begins in Haiti. 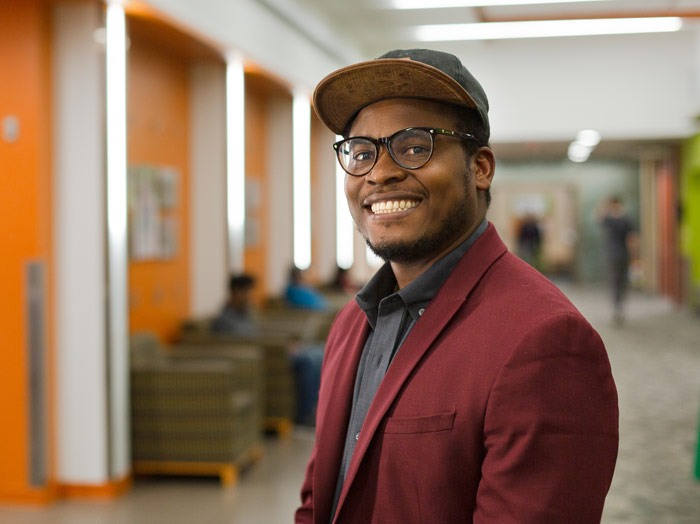 Jude Celiscar served in Student Government while at UT Dallas and will work on completing a master’s degree in political science at the University after graduation.

Celiscar will be the first college graduate in his family when he earns his bachelor’s degree from The University of Texas at Dallas next week. He plans to stay at UT Dallas to work on a master’s degree in political science in the School of Economic, Political and Policy Sciences as part of a fast-track program that allows students to earn both degrees in five years.

The Diversity Scholar and former student senator wants to own a successful business, work to improve Haiti’s government and possibly run for office there one day. Celiscar already has gained recognition for his business, goodoo courier, which ships merchandise to Haiti. A recent Forbes online article named him as one of 10 young Haitian entrepreneurs working to reinvent their nation.

Getting an education has been filled with obstacles including extreme poverty and the 7.0-magnitude earthquake that destroyed several universities in Haiti in 2010.

“What impresses me about Jude is that by all logic he should never have gotten here. He got here largely through his intelligence, his hard work, the network he has become part of and that is helping to build up Haiti. He’s reaching back and bringing along and that’s what it’s going to take for Haiti to develop.”

Dr. Bobby Alexander, associate professor of sociology in the School of Economic, Political and Policy Sciences

Celiscar made it his mission to get a degree after his family became homeless when he was a child.

“I remember thinking I do not want to be in a position one day where I will be evicted from my place. I started to think about what I wanted to do and who I wanted to become. These things pushed me to work very hard to further my education,” he said. “One thing our parents always tell us in Haiti is that education is the best wealth parents can give their children.”

Celiscar remembers being turned away from school when his parents couldn’t pay the tuition. Even when he was able to attend, there were times when he struggled to learn because he did not have enough to eat.

“One time I was in class and I felt dizzy. I saw things moving, and the next thing I knew I was at home. I passed out because I was so hungry,” Celiscar said.

After high school, Celiscar enrolled at a university and studied accounting. He tutored elementary and high school students to pay tuition. Then, in January 2010, came the earthquake.

The disaster killed an estimated 220,000 and displaced at least 1.5 million people in the country about the size of Maryland. Celiscar’s university was destroyed. Most of his classmates died. Celiscar said he survived because he was running late for class. His university permanently closed. Celiscar focused on community service projects to help the nation rebuild. However, he was determined to find a way to go back to college. 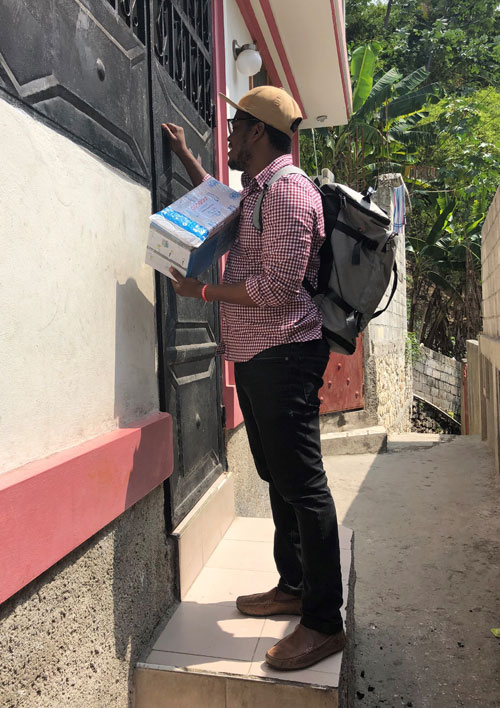 Celiscar, delivering a package to a residence in Haiti, created a courier business that helps bring goods to his homeland.

“I know some people could have been discouraged and say ‘I’m not doing this anymore. I’ll just stay here and work,’” Celiscar said. “It was hard, but I always see myself as a fighter. These things can’t stop me from focusing on my dream, on my goal.”

In 2013, he moved to Texas and had to start his college career over because his transcript, which was only on paper, was destroyed in the earthquake. Celiscar attended North Lake College in the Dallas County Community College District and then transferred to UT Dallas in the fall of 2017.

Whenever he traveled home, friends and family members would ask him to bring electronics, shoes and other goods that major retailers do not ship to Haiti. That led to a business idea. Celiscar and a business partner in Haiti started goodoo courier, which delivers goods through a network of independent contractors.

Monica Williamson, assistant director of the Multicultural Center who oversees the Diversity Scholars Program, said Celiscar is a “gifted leader with a unique entrepreneurial spirit” who always stays focused on his goals.

“During our check-ins, we talk about his passion to develop and grow his business, his love for his home country Haiti, and his passion for connecting students to resources and opportunities,” she said. “He has a tenacious ability to explore amazing opportunities.”

Dr. Bobby Alexander, associate professor of sociology, calls Celiscar a visionary for his efforts to improve education and the economy in Haiti.

“What impresses me about Jude is that by all logic he should never have gotten here,” he said. “He got here largely through his intelligence, his hard work and the network he has become part of and that is helping to build up Haiti. He’s reaching back and bringing along and that’s what it’s going to take for Haiti to develop.”

Celiscar said he hopes his message will inspire others to push past hurdles.

“I keep going because I want to offer to my family a better life than before. I do not want my own children to experience the burden I experienced while growing up,” he said. “Also, I want to show the youth in Haiti, especially in my hometown in Montrouis, that working hard is the key to becoming more and achieving more.”

In addition to being a full-time student and an entrepreneur, Celiscar speaks to youth groups when he visits Haiti to encourage them to continue their educations.

“I feel like if I can do it, anyone else can do it,” he said. “If I can escape from all of these things in Haiti and become a college graduate, then anyone can.”