International Peer Advocate Helps Others Navigate the World of UTD 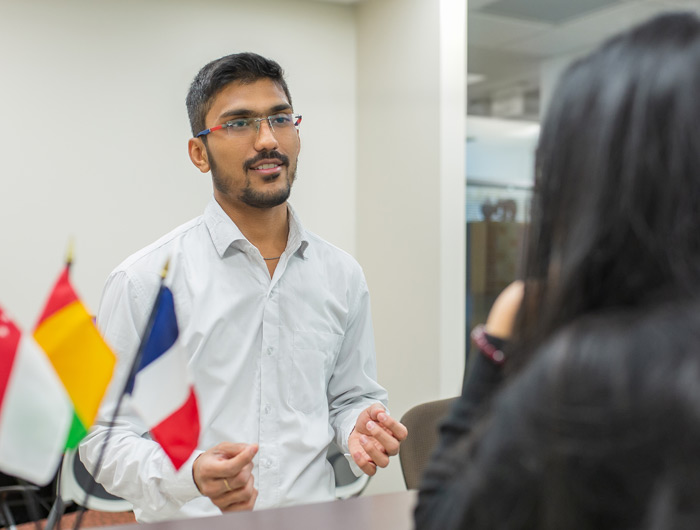 Shrenik Ramani, who is set to graduate next week, has helped create and implement transitional intercultural programs through his work at the International Center. He also serves as a sounding board for students as they adapt to university life. “You get a chance to talk to students from more than 100 different countries. This is like a dream for me,” he said.

Shrenik Ramani, a first-generation business analytics master’s degree student from India who is set to graduate next week, wanted to make other international students feel as welcome at UT Dallas as he did when he first arrived on campus.

“A random student on campus saw the confusion on my face and took the next hour to explain some things to me. That was my first impression — that someone would go out of their way to help me — and it hasn’t changed,” he said.

As a peer advocate in the International Center, Ramani has made good on his goal to give back to the campus community by helping other international students also feel connected at UT Dallas.

“You get a chance to talk to students from more than 100 different countries. This is like a dream for me,” he said.

Ramani has presented information at fall, spring and summer orientations to help international students learn to navigate campus. He has helped create and implement transitional intercultural programs, such as cultural trips and International Week. And he serves as a sounding board for students as they adapt to university life.

When international students living in off-campus apartments grew frustrated for having to endure two 20-minute waits to board a bus that wasn’t full, Ramani documented their need and was instrumental in adding a second bus on that route.

Leticia Zamarripa, director of global engagement, said Ramani has been an effective, action-oriented advocate and ambassador for international students at UT Dallas.

“Because he is an international student himself, international students make an easy connection with Shrenik. He serves as a bridge with the population we serve, allowing us to communicate better and understand their needs,” she said. “Shrenik is full of energy and a team player. His commitment to the job has been outstanding, and his contributions have been beyond expectations.”

When he first considered coming to Texas to earn his graduate degree, Ramani tapped into the experience of a cousin who lived in Denton and his current roommate, who is from Houston. He learned how to lease an apartment, to always carry ID papers and to not buy a winter jacket until he got here, because the weather would be much colder than he experienced back home.

But his connection with students on campus helped him feel at home at UT Dallas. Within a year he had gained the confidence to become president of Orators at UTD, a chapter of Toastmasters International; a board member of the Student Leadership Advisory Board; a social media co-lead of the Dean’s Council of the Naveen Jindal School of Management; and a student speaker at the 2018 convocation, where he shared his journey as an international student.

“I was overwhelmed by the response of students. I was speaking to freshman, transfer and graduate students, and the majority of them were domestic students, but they told me they identified with what I was saying. That was the biggest moment of my life,” Ramani said.

He also spreads the word about UT Dallas to friends back home.

“In India, word-of-mouth is a really big thing. Your personal experience says a lot. I can give them a deeper dive into what it’s like to be at UT Dallas,” Ramani said.

Ramani hopes to work for several years as a business analyst before heading back to India with a plumper portfolio. He tells students who may be thinking about UT Dallas to remember to give back to the community.

“If I can do this, anyone in the world can do it. I would tell them, ‘You’re in the right place. It doesn’t matter here where you’re from, but what you do while you’re here,’” Ramani said.