When he graduates this month from The University of Texas at Dallas, Air Force veteran Jeff Wilson will move to the next phase of his career with the same dedication he showed in the military, as a father of two young children and as a peer advisor to fellow student veterans. 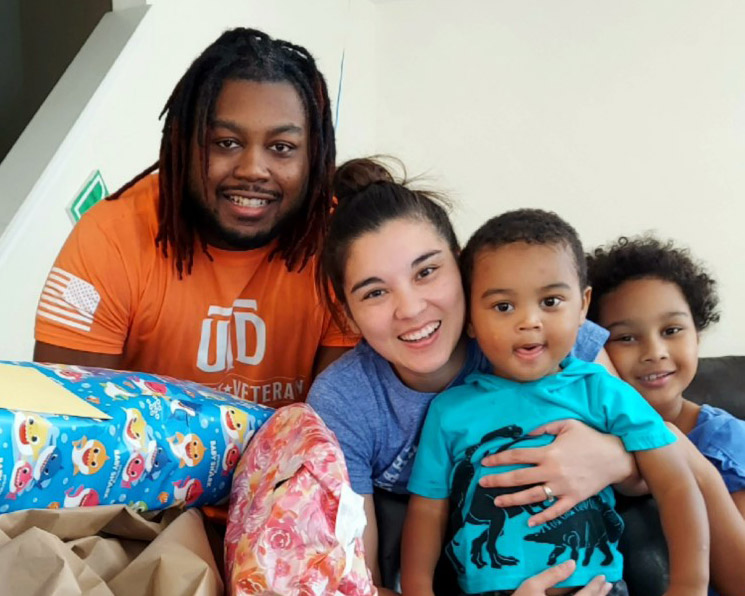 From left: Jeff Wilson, with his wife, Ashley; son Jeffrey Jr.; and daughter Alexa, will graduate this fall with a bachelor’s degree in healthcare studies.

Wilson, a healthcare studies senior in the School of Interdisciplinary Studies, has been accepted to the University of Houston College of Optometry starting in fall 2021.

He is among the 80 student veterans who are invited to participate in a virtual graduating veteran recognition ceremony on Thursday, Dec. 10, that will recognize their military service. Graduates will gather virtually on Microsoft Teams to hear speakers, including UT Dallas President Richard C. Benson, and share their military and college experiences. Red, white and blue honor cords were mailed this week to each graduate.

Wilson plans to participate in the online gathering but admits that marking his college graduation with a virtual ceremony is a little bittersweet for his family.

“My grandmother in Chicago has been to every one of my graduations. This is the first one she will miss,” he said.

Wilson moved to Texas from his native Chicago when he started high school. His parents had been concerned about increased gang violence and sent him to live with his aunt and uncle.

After completing high school, Wilson began pursuing a degree in mechanical engineering at UT San Antonio. Despite receiving an ROTC scholarship, he couldn’t afford to continue paying tuition. He opted to join the military instead. His aunt, an Army veteran, encouraged him to consider the Air Force.

Summer and fall 2020 student veteran graduates will be honored for their military service and academic achievements during a virtual ceremony at 2 p.m. Thursday, Dec. 10. All graduating student veterans in attendance will be entered into a drawing for a chance to win an Alumni Association membership compliments of the Office of Development and Alumni Relations. Learn more about fall commencement on the graduation webpage.

Upon completing boot camp in San Antonio, Wilson married his high school sweetheart, Ashley, an elementary school teacher. The couple was based in Tucson, Arizona, where Wilson trained as an airborne acquisition operator and flew missions on an EC-130, working to disrupt enemy communication. He was deployed to Kuwait for several months in 2015.

When he separated from the military, Wilson knew he wanted to return to Texas. He chose to pursue his bachelor’s degree at UT Dallas because of the University’s growing reputation.

Shortly before he was to start at UT Dallas in 2017, he and his wife endured the heartbreaking loss of their second daughter, who was born prematurely at 25 weeks and was unable to breathe on her own.

PAVE advisors know that fellow student veterans are typically older than their traditional college peers and have more life experience. Because of his positive experience with that program, Wilson became a PAVE advisor and has served in that role since 2018.

“I knew how much it had helped me. It was nice to have another veteran to ask when I needed to know something. It’s been great,” Wilson said.

Lisa Adams, director of the Military and Veteran Center, said about 20 peer advisors serve student veterans at UT Dallas each semester. Since UT Dallas joined the national program in 2016, Wilson is just one of three peer advisors to have volunteered for five consecutive semesters.

“We are grateful for Jeff’s participation and the perspective he brings, not just to his assigned students, but also with the other peer advisors. Jeff’s commitment to serve others is one of the reasons the PAVE program is successful at UT Dallas.”

Lisa Adams, director of the Military and Veteran Center at UT Dallas

“When someone relocates in the military, they are assigned a sponsor who will welcome them at the new duty location and ease their transition,” Adams said. “Taking care of your team and teammates is an essential value in the military. PAVE applies this familiar concept by pairing student veterans in their first semester at UT Dallas with another student veteran, based on their major or school.

“We are grateful for Jeff’s participation and the perspective he brings, not just to his assigned students, but also with the other peer advisors. Jeff’s commitment to serve others is one of the reasons the PAVE program is successful at UT Dallas.”

While a full-time student at UT Dallas, Wilson also worked part time as an optometric technician. He settled on optometry for his career path after shadowing physical therapists, dentists and optometrists.

“The eye doctors all seemed really satisfied and happy with their careers. I knew I might be able to make more money in another field, but I realized I wouldn’t have as much time to enjoy it,” Wilson said.

He and his wife went on to have another child, Jeffrey Jr., 2, who joined his oldest sister, Alexa, 7. Wilson has already learned to juggle his academic obligations while being present for his growing family.

“It can be difficult,” he said, “but I use my time on campus studying so that when I get home, I’m able to spend time with my family.”

Tagged: Class of 2020 IS Military and Veteran Center