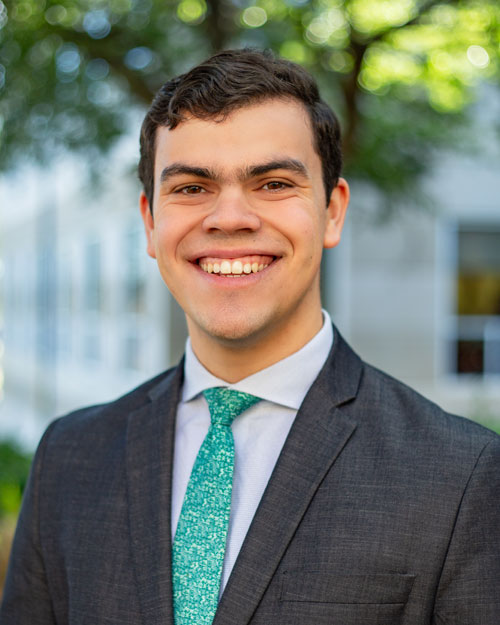 Global business and marketing senior Carlos Rodriguez-Cruz y Celis says he gained an “analytical lens” from the Naveen Jindal School of Management at The University of Texas at Dallas that will help him develop policy solutions for global challenges.

His perspective will be further enhanced when he travels to Beijing in June as the second UT Dallas recipient of the prestigious international Schwarzman Scholar award.

The Schwarzman is a highly selective award that fully funds a one-year master’s degree in global affairs at Tsinghua University in Beijing, as well as travel costs and a personal stipend.

Rodriguez-Cruz y Celis is one of just 147 students selected this year from a pool of more than 2,800 applicants from 38 countries and 119 universities.

“I’m really drawn by the immersive learning experience and seeing how China influences foreign policy in the world. I’m looking forward to building mutual understanding and applying my business skills to global challenges,” he said.

“Carlos is not only a tremendously sophisticated student of international affairs and diplomacy, but he is also an authentic leader, understanding how to build coalitions and bridge divides. The program at Tsinghua University is receiving one of the most authentically gregarious and engaging scholars whom I have had the pleasure of knowing.”

“Carlos is not only a tremendously sophisticated student of international affairs and diplomacy, but he is also an authentic leader, understanding how to build coalitions and bridge divides,” Dow said. “The program at Tsinghua University is receiving one of the most authentically gregarious and engaging scholars whom I have had the pleasure of knowing.”

Originally from Puerto Rico, Rodriguez-Cruz y Celis grew up in Plano and was drawn to UT Dallas because of the opportunities and resources available in the Davidson Management Honors Program and the Wildenthal Honors College. Never one to shy from hard work, he was inspired by his family’s commitment to education: His father is a biomedical engineer, and his mother is a speech pathologist.

“I am grateful to the Honors College, the Davidson Management Honors Program and my professors for supporting me every step of the way. My experiences in the classroom challenged me to grow and explore new areas of interest,” said Rodriguez-Cruz y Celis, who is also an AES Cultural Scholar.

Stephen Schwarzman, chairman, CEO and co-founder of Blackstone, founded the Schwarzman Scholars program to give the most talented future leaders the power to change the course of history. Schwarzman has donated $100 million to this effort and is leading a campaign to raise $500 million more to fully endow the program — the single largest charitable effort in China’s history coming from largely international donors.

Past Honorees: Matthew Salm BS’18, an alumnus of the Eugene McDermott Scholars program, received the scholarship in 2018. Eunice Ko BS’16 was a finalist in 2016.

Accounting senior lecturer Matt Polze, an associate dean of the Jindal School, said Rodriguez-Cruz y Celis demonstrated a love of learning and was able to craft a distinctive educational experience while at UT Dallas.

“Carlos is an enthusiastic and determined learner. He took full advantage of the programs and resources available to him, which allowed him to expand his worldview, develop intellectually and fuel his academic curiosity,” Polze said.

Rodriguez-Cruz y Celis credited his cross-cultural learning experiences for helping him appreciate international institutions. He was a Bill Archer Fellow in spring 2017 and served as an intern with the United Nations Information Center. He also interned with the U.S. Department of State and was an exchange student at the Vienna University of Economics and Business in spring 2016 when he became involved with the Comprehensive Nuclear-Test-Ban Treaty Organization Youth Group.

“When the Cold War ended, people thought the threat of nuclear weapons was over. But since then, the nuclear security environment has become much more frightening and complex. Youths today have a big role to play in promoting nuclear nonproliferation,” he said.

He plans to dedicate his career to reducing nuclear threats through multilateral diplomacy.

“Growing up in North Texas, which is so diverse, taught me that shared solutions are so much richer than when you go it alone. Diplomacy helps you build cross-cultural relationships to solve common problems. One country can’t do it by itself,” he said.