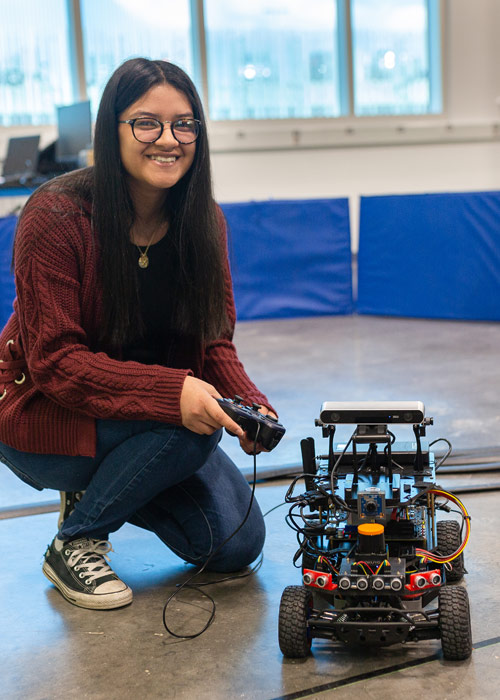 Electrical engineering senior Jocelyn Linares demonstrates a vehicle that she and her teammates worked on in the UTDesign program. The project placed third in a recent UTDesign Expo competition.

Jocelyn Linares will celebrate several firsts when she is recognized Wednesday for earning a Bachelor of Science in electrical engineering from The University of Texas at Dallas.

She will be the first engineer — and the first college graduate — in her family. In addition, Linares and Sonia Torres will be the first two participants from the University’s Young Women in Science and Engineering (YWISE) Investigators program to graduate from UT Dallas.

Both Linares and Torres will earn their degrees from the Erik Jonsson School of Engineering and Computer Science. Torres will receive a Bachelor of Science in computer science.

Participating in YWISE Investigators and other STEM programs in high school influenced Linares’ decision to study engineering at UT Dallas, she said.

“Young WISE Investigators was a great experience,” Linares said. “When we did our presentation here, I really liked the school. Everyone was nice, the campus was beautiful and I thought ‘I want to go to school here.’”

Students in the YWISE Investigators program, sponsored by the Department of Community Engagement, work with mentors to design solutions to science and engineering problems and compete for scholarships. Since the program began, 244 students have participated, with many choosing to study at UT Dallas. The program is funded by the University, the Texas Instruments Foundation and Ericsson.

“It is exciting to see the impact of the Young WISE Investigators on our University enrollment,” said Raul Hinojosa Jr., director of community engagement at UT Dallas. “The students have formed a great community of scholars to support each other based on the connections they built working on their research projects in high school.” 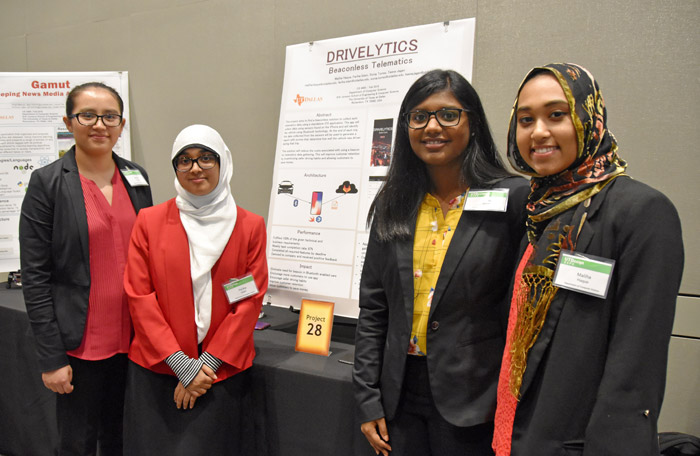 Linares said she became interested in STEM while taking robotics at Hillcrest High School in the Dallas Independent School District, and a teacher told her about YWISE Investigators.

“I learned a lot from the program, and it continues to help me because, as seniors in engineering, we have to do senior design projects, and it’s a very similar process,” Linares said. “Young WISE Investigators helped me with time management, how to work with a team, how to do research and how to present in front of judges. I benefited a lot from that experience.”

For her senior design project, Linares worked with a team of classmates on a fleet of autonomous vehicles, which they programmed to navigate hallways. The group won third place in the UTDesign Expo.

As a YWISE Investigator, Torres was part of a team from Irma Lerma Rangel Young Women’s Leadership School that won first place in the 2014 competition with a prototype device that could locate and page items within a certain radius. At UT Dallas, Torres’ senior design team developed an app that collects data using sensors found on an iPhone to generate a report that shows how well a vehicle is driven. The project, designed to improve insurance customer retention by incentivizing safer driving habits, won the top prize at the UTDesign Computer Science Expo last fall.

Dr. George Fair, vice president for diversity and community engagement and dean of the School of Interdisciplinary Studies, said that Linares’ and Torres’ accomplishments demonstrate how programs such as YWISE Investigators can help push past barriers to help more young women from underrepresented communities earn degrees in STEM fields.

“We are delighted that the Young WISE Investigators program is helping more young women pursue degrees in fields such as engineering and computer science,” he said. “We are very proud of these students for achieving this milestone.”