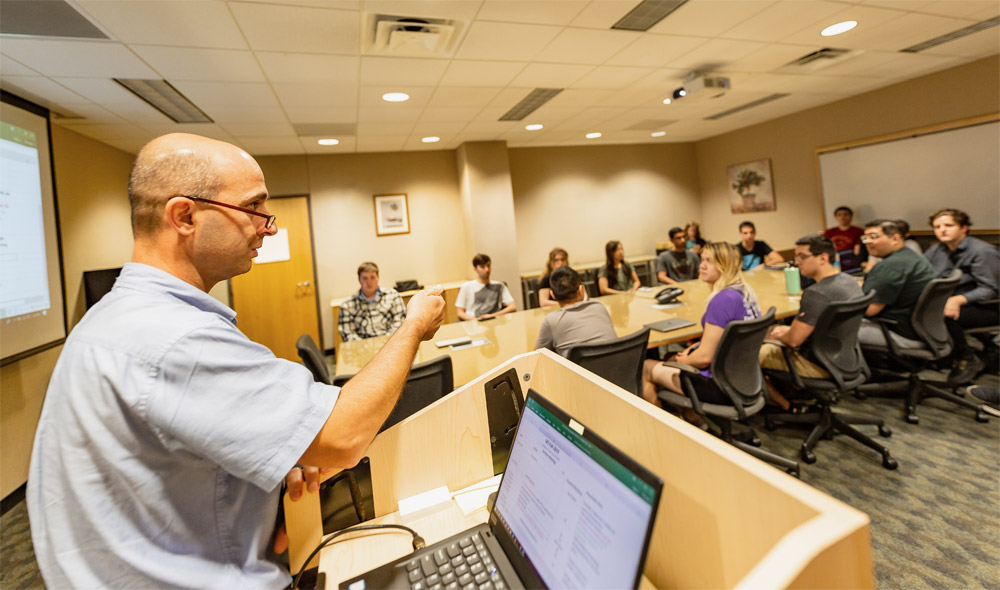 Dr. Kamil Sarac, professor of computer science and director of Cyber Security education programs at UT Dallas, meets weekly with graduate students benefiting from the CyberCorps: Scholarship for Service program. “For students who want to go into cybersecurity, it’s a great program financially, and it allows them to get into the field early in their careers,” he said.

Gina Fossati BS’19 was exploring different career paths in computer science when she found out about the CyberCorps: Scholarship for Service (SFS).

“I’m so grateful to have been awarded such an amazing scholarship,” said Fossati, who is working on her master’s degree. “It has allowed me to continue my education at UT Dallas, given me the opportunity to attend conferences and offered me many job opportunities.” 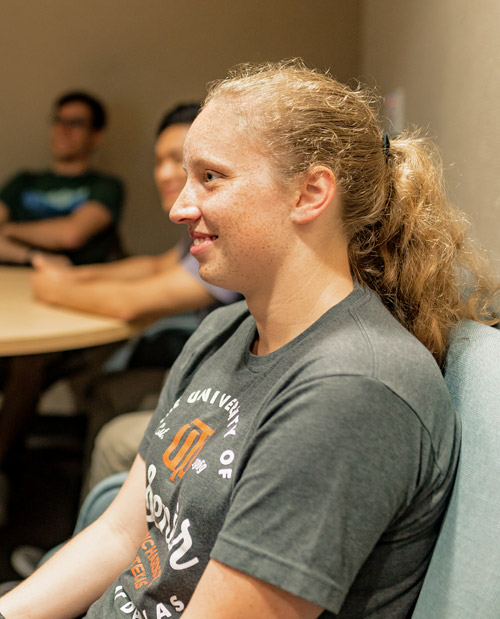 “I’m so grateful to have been awarded such an amazing scholarship. It has allowed me to continue my education at UT Dallas, given me the opportunity to attend conferences and offered me many job opportunities.

Gina Fossati BS’19, who is working toward a master’s degree in computer science through the CyberCorps: Scholarship for Service program

The Erik Jonsson School of Engineering and Computer Science has received $4 million from the NSF to support about 24 students with scholarships through 2024. As part of the grant, the University will develop new courses to address increased cybersecurity threats from cloud computing and mobile devices. The new courses include next-generation network security and trustworthy machine learning, which involves the use of algorithms and statistical models that allow computers to recognize patterns needed to perform tasks. New courses on policy and risk will be offered through the School of Economic, Political and Policy Sciences (EPPS).

Dr. Bhavani Thuraisingham, the Founders Chair in Engineering and Computer Science and executive director of UT Dallas’ Cyber Security Research and Education Institute, is a co-principal investigator on the grant.

“We are very pleased and honored that we have been awarded the SFS award three times in a row starting in 2010,” Thuraisingham said. “We have not only educated our graduate students through this program, but it has also enabled us to actively participate in and chair events for Women in Cybersecurity and Women in Data Science.”

The SFS program pays qualified students’ tuition and fees and provides a stipend of up to $34,000 per academic year. Recipients must agree to work after graduation for a federal, state or local government entity for a period equal to the length of the scholarship. The University is one of more than 70 U.S. institutions that participate in the program.

“For students who want to go into cybersecurity, it’s a great program financially, and it allows them to get into the field early in their careers,” said Dr. Kamil Sarac, professor of computer science and director of Cyber Security education programs. He also is a co-principal investigator on the grant.

“The governmental agencies have cutting-edge technologies, some of the best jobs and the biggest challenges,” Sarac said. “When you expose yourself to that environment, you learn a lot. You become one of the top-notch people in the field, and everyone wants to hire you at that point.”

Students interested in the program can learn more about the application process and eligibility requirements on the scholarship website.

Jerry Arnold BS’11, MS’13 said he initially planned to work after he earned his bachelor’s degree in computer science. However, he said SFS made it possible for him to take his education to another level. Now, Arnold works as a cybersecurity analyst for the Federal Reserve Bank of New York.

“I thought at the time that I was really interested in being a developer/programmer, but when I saw the Scholarship for Service recruitment flyer, I decided to check out cybersecurity,” Arnold said. “When I looked into the program, I saw that there was a lot of growth and potential in the field.”

Fossati, who expects to earn her master’s degree in May, said she likes being able to attend career fairs, conferences, workshops and student activities through the program. The financial support makes it possible for her to focus on her education and continue to volunteer for the Freshman Mentor Program, serve on the Student-Athlete Advisory Committee and run cross country for the University. Fossati was part of the 2016 and 2017 American Southwest Conference championship teams.

“SFS is a lot of work, but I like to keep a busy schedule,” Fossati said. “I’m so glad that I found my way to SFS because it has set me up for a fantastic future.”