Editor’s Note: Every Comet follows a distinct path to UT Dallas, and members of the Class of 2019 are no exception. A few soon-to-be fall graduates shared their thoughts about their journeys as they get ready to tackle new challenges after commencement. 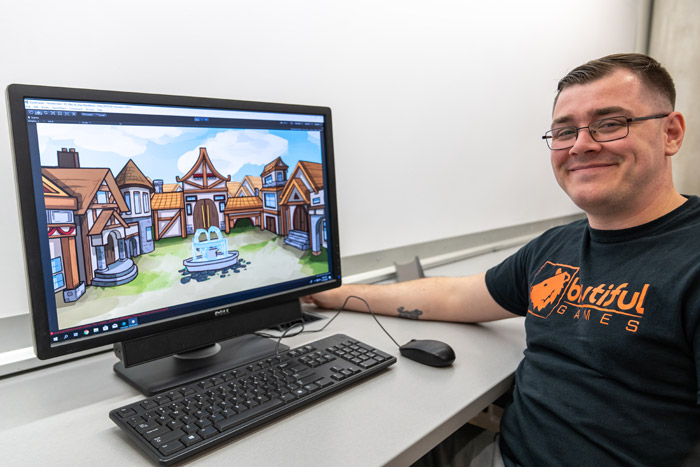 Christopher Walka, with his video game Guildmaster, which was nominated for best capstone project in the School of Arts, Technology, and Emerging Communication.

Arts, Technology, and Emerging Communication senior Christopher Walka created his first video game with a buddy during their freshman year in high school. He has continued creating his alternative universes and their characters as a hobby during his seven years of active duty in the Air Force and three in the Reserve. Walka chose UT Dallas for his bachelor’s degree because of the University’s reputation for its games programs.

While at UT Dallas, Walka launched Brutiful Games, a profit-share indie game studio, to give fellow students an opportunity to collaborate on projects and build their portfolio. Now wrapping up his academic career, Walka has earned a nomination for best capstone project for his game Guildmaster, in which randomly generated heroes go on a quest for treasure awards. Walka and Lauren Heath, also a December grad who worked on the capstone game, are signing over Guildmaster to Brutiful Games, where a team will focus on developing a mobile version.

What will you miss most about UTD?

I’m going to miss seeing all the talent in the Game Research Lab, where student teams simulate a small game development studio, as well as frequent face time with the professors I consider to be my mentors.

Would you rather have to retake a final exam or be Temoc for a day?

I guess I’m kind of weird: I would much rather retake a final exam. Exams are stressful, but I also find them a challenge, like solving a problem. Plus, they only last about an hour, and I’m able to unwind immediately.

University Set To Cap Off Year at Commencement

What is a fun fact about you?

I have a tattoo on my arm of a zombie rabbit character from my first published game, Notes From Igor. I plan to get one for every game I publish.

What are the best ways to survive a Monday?

Try to get enough sleep, reminisce about the weekend, and think about the upcoming weekend.

What’s the most Instagrammable spot on campus?

The memorial fountains on the mall are very nice.

What’s the first thing you’ll do to celebrate your graduation?

The current plan is karaoke. I don’t normally do karaoke, but my girlfriend is wanting to do it.

What accomplishment/project are you most proud of from your time at UTD?

This last semester was a rush, and surviving it well takes the spot as my favorite accomplishment at UTD. Between burying myself in capstone, doing game design for Game Lab, taking two other classes, managing my company and being the creative director for our game, programming during a local game jam and working when I’m not at school, my schedule was always full.

UT Dallas alumni make their mark wherever they go. How will you make yours?

Ideally, my mark will be made through my indie game studio, Brutiful Games. I’d love to create a bunch of titles that allow me to spread my love for games as well as increase accessibility to and knowledge of game development for aspiring game developers.

Literature Grad Is Thinker at Heart

From Military to Medicine, Grad Discovers His Life’s Duty