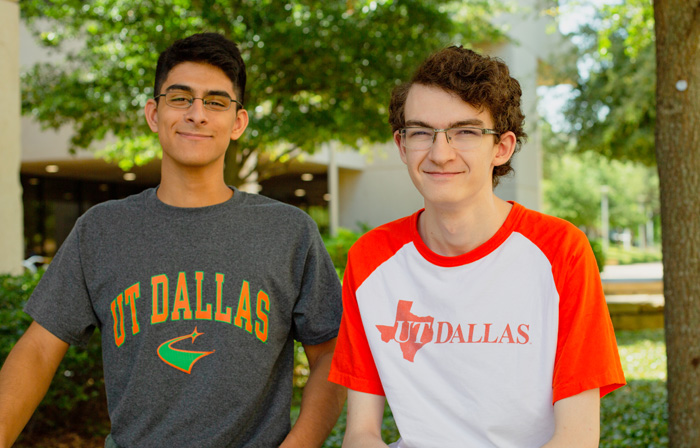 Biomedical engineering freshman Gabriel Rivero (left) and physics major Logan Sumich have been best friends since childhood. When they had to choose a college, both independently gravitated toward UT Dallas.

Logan Sumich and Gabriel Rivero became best friends during their kindergarten days in Houston. Being intellectually curious, the two would indulge in countless what-if conversations over the years, with topics ranging from their favorite sci-fi video games and anime films to things they would invent to save the world.

This fall, their childhood musings will likely ripen into academic topics at The University of Texas at Dallas, where Sumich will study physics and Rivero will pursue biomedical engineering.

The two best friends since childhood will also be roommates in Residence Hall West. Pity the third freshman who shares their suite.

Their friendship began after school when kindergarten classes let out. Each lived nearby and could walk home, so they would hang out while the rest of their peers lined up for carpool.

“It was definitely on the playground,” Sumich said of their budding friendship. “We weren’t in a rush. We were close friends by the end of kindergarten.”

They bonded over “Mega Man,” which was their favorite television show and video game series. As they grew older, their conversations focused on how history and philosophy impacted certain regions, or how biomechanical devices could improve lives.

“We would take a bizarre idea and run with it,” Sumich said.

Rivero, who was interested in biomechanics, recalled wanting to make a prosthetic limb that is “more than a chunk of metal attached to a body.”

Sumich (left) and Rivero first met as kindergartners in Houston and now will be college roommates at UT Dallas. (Use the slider tool on the image to see them together — then and now.)

“Prosthetics have always been really interesting to me. I liked thinking about how we could make them better,” he said. “In sixth grade, I thought about making a prosthetic eye, and then two years later, it happened. I was kind of bummed.”

The two shared the same classes most years and were inseparable until high school when Sumich moved to Flower Mound with his mom.

“I pretty much talked to nobody my freshman year,” said Rivero, who stayed behind at Cypress Ridge High School.

Still, they made time to make overnight trips to visit each other.

University Housing will welcome more than 4,000 Comets to campus Aug. 13-15 for Move-In Days. Students will check in at the Visitor Center and University Bookstore atrium before moving into their respective residence halls or apartments. Be aware of increased traffic on campus and in the surrounding areas.

When it came time to choose a college, they both independently gravitated toward UT Dallas, with its reputation for rigorous academic programs and undergraduate research opportunities. Rivero invited Sumich to join him on a UT Dallas tour, and they were sold. They loved the new science and engineering buildings on campus, the serious academic environment and the three-bedroom residence hall suites.

“The fact that he was going there sealed it for me,” Rivero said.

While Rivero studies biomedical engineering, Sumich will pursue his fascination with the unsolved problems and paradoxes of particle physics. He recently visited the European Council for Nuclear Research in Switzerland, known as CERN, which operates the largest particle physics laboratory in the world. He would like to work there one day.

“Classic physics deals with subjects that are our size. The more you get down to protons, neutrons and electrons, it gets you into the realm of probabilities. It’s more challenging,” Sumich said.

Though they practically finish one another’s sentences, each expects to branch out and thrive in a diverse and challenging new academic environment.

“I’m looking forward to actually studying what I want to,” Rivero said.

Sumich added: “I’m excited about being in an environment where I’ll be meeting people who can entertain and understand my hobbies.”