McDermott Scholar Will Further Her Arabic Studies as Boren Scholar 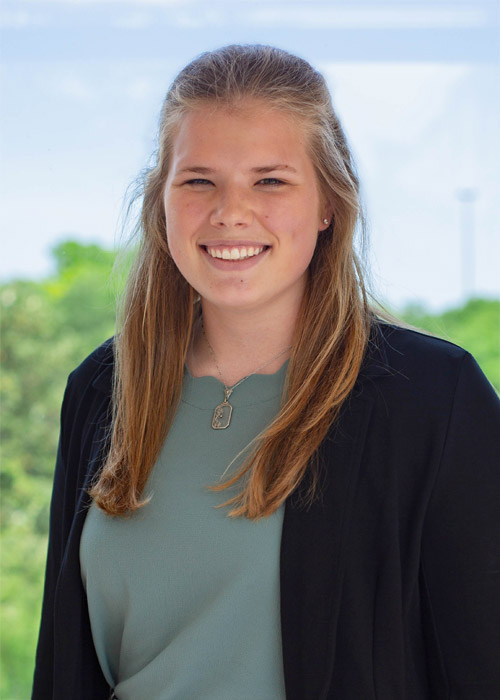 Elizabeth “Tess” Helfrich, a biology and historical studies junior at The University of Texas at Dallas, hopes a distinguished scholarship will provide the next step in her journey toward practicing emergency medicine overseas.

Helfrich is the first Eugene McDermott Scholar to receive a Boren Scholarship from the National Security Education Program. She will spend the next year studying modern standard Arabic as well as the local Ammiya dialect at the Qasid Arabic Institute in Amman, Jordan.

The Boren Scholarship provides up to $20,000 for study in areas of the world that are critical to U.S. interests, including Africa, Asia, Latin America, Central and Eastern Europe, Eurasia and the Middle East.

Helfrich is the University’s latest Boren award winner. Aysha Khan received a Boren Fellowship for graduate students in 2017. Hyunjoo “Eunice” Ko received a Boren Scholarship for undergraduates in 2014. Boren recipients are typically students interested in international studies and politics, but Helfrich sees the medical field as another path toward improving global relations.

“In my travels, I’ve seen the impact and honor that comes with being an American citizen more than ever before, but we obviously have some perception problems. Health care is a good way to change that, and UTD has let me find that path,” she said.

Helfrich already has a head start on reaching her goals. Her interest in Arabic language and culture was stirred when she attended a Michigan international high school, where about 45% of the population was composed of Arab Americans, many of whom were Muslim. She also studied basic Arabic for a semester at UT Dallas.

“In my travels, I’ve seen the impact and honor that comes with being an American citizen more than ever before, but we obviously have some perception problems. Health care is a good way to change that, and UTD has let me find that path.”

“Everything’s different every day. You never know what you’re going to walk in on, and you have to make split-second decisions,” she said. “The EMT squad is so passionate and smart, and it’s so cool to see the care they place in their work.”

And she has experience living overseas. She spent last summer in Sierra Leone, shadowing physicians who were working on clinical trials of an Ebola vaccine in a pediatric ward. That’s where she saw a clash between Western medical training and cultural values.

“Some cultures see the blood as finite, so our standard practice of withdrawing blood is seen as taking their life force,” Helfrich said.

She hopes living in Jordan will give her further insight into cultural differences. She will supplement her Arabic studies by maintaining her UT Dallas coursework through independent study classes on topics such as women in the Middle East and public history. She also will have an internship that focuses on refugee health care.

“With her engagement with global affairs and emergency medical response, Tess is helping to expand the different meanings of national security that the Boren Scholarship seeks to promote,” said Dr. Douglas Dow, associate dean of the Hobson Wildenthal Honors College and clinical professor of political science. “Tess has an adventurous and cosmopolitan spirit in addition to her strong set of diverse academic interests. I’m very happy she will be representing UTD in Jordan next year.”