For Physics Groups, Love of Astronomy Was Always Written in the Stars 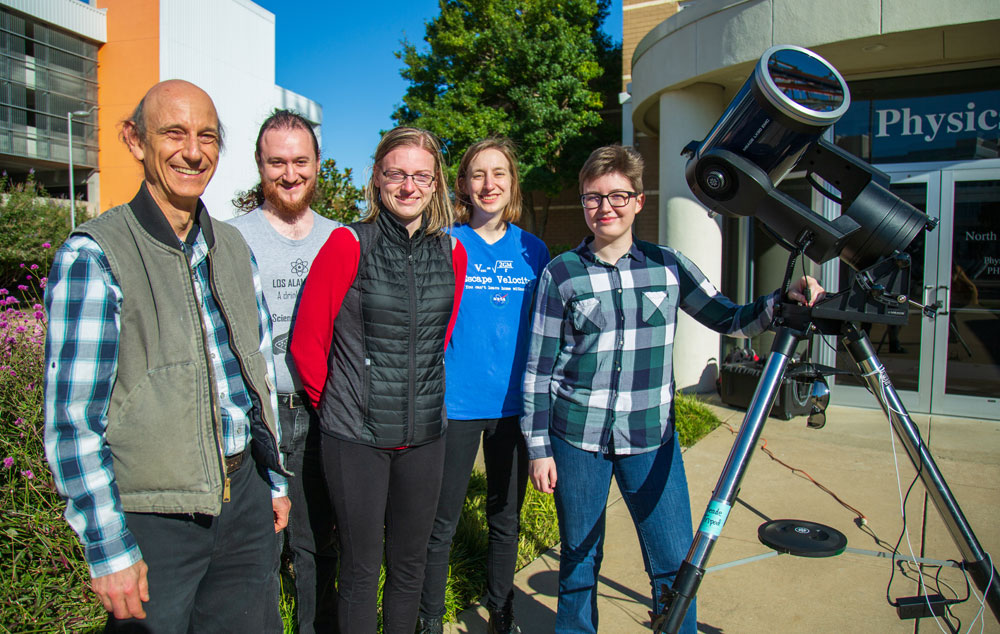 Victoria Catlett’s father bought The University of Texas at Dallas junior a telescope at the age of 9, thus igniting a love of astronomy that has continued since childhood. The two would spend evenings searching for constellations in the evening sky.

Now a physics and mathematics double major, Catlett is the business chair and unofficial “astronomy officer” for the Society of Physics Students (SPS) at UT Dallas. As such, Catlett is part of a team of students who are instrumental in organizing star parties, telescope training and watch parties for events such as solar and lunar eclipses.

“I’ve always loved thinking about outer space. It kind of reminds us of our place in the solar system. Astronomy lets me explore it from the ground,” Catlett said. 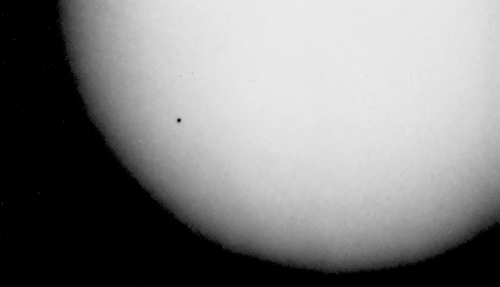 Dr. Joseph Izen took this photo of the transit of Mercury in 1973.

Where: Grassy area on the north side of the Student Union

Students in the SPS and the Graduate Students in Physics (GSP) are helping to organize a Nov. 11 watch party on campus for the transit of Mercury — the astronomical term for the event — when the silhouette of the planet will appear as a tiny black spot moving across the disk of the sun.

Astronomical events are often popular at UT Dallas, which has enjoyed a rich history of research in the Department of Physics and the William B. Hanson Center for Space Sciences. In January, about 500 spectators — including members of the Texas Astronomical Society of Dallas — gathered to watch the lunar eclipse from Parking Structure 3. Students also filled the mall area in August 2017 to watch a solar eclipse.

“We understand so little about what is out there in the universe,” said Eske Pedersen, a physics PhD student and former treasurer for the GSP. “When you look at something like the rings of Saturn, you realize how large they actually are — bigger even than the Earth.”

Sky watchers are particularly looking forward to the transit of Mercury. Although there are about 13 transits each century of the innermost planet of the solar system, the next one visible from the U.S. won’t occur until 2049.

“This will be the first Mercury transit for the Society of Physics Students and [other campus] astronomers, so they are probably as excited as I was in 1973 when I first saw it during my freshman year in college,” said Dr. Joseph Izen, professor of physics. “It will be a long wait until 2049 — when I will be 96 — so I am going all out on Nov. 11. I plan to record the event with three telescopes, and I will be gawking with the very same telescope I used in 1973.”

“We want students passing by to ask themselves what all those people are doing over there looking at the sun with telescopes. We are hoping they will find it interesting. This is an event that won’t happen again until they are in their 50s.”

The main watch-party area will be on the grassy area on the north side of the Student Union facing Founders Building, where several telescopes will be set up for students. Izen and members of the Texas Astronomical Society will be taking photos and video on the lawn next to the Visitor Center and traffic circle.

The transit will be visible in North Texas from sunrise until noon, but the best viewing from the Student Union green area will begin around 8 a.m. Observers should follow appropriate safety precautions, including never looking at the sun with the naked eye or through binoculars or telescopes that aren’t equipped with the proper filters.

“It’s potentially dangerous to view the sun with a telescope. You need a secure solar filter,” Catlett said, adding that watch-party organizers will have proper filtration on each telescope for safe solar viewing.

Pedersen said he hopes many UT Dallas students will be curious about the Mercury transit and come take a look.

“We want students passing by to ask themselves what all those people are doing over there looking at the sun with telescopes. We are hoping they will find it interesting. This is an event that won’t happen again until they are in their 50s,” Pedersen said.