A new children’s book will help demystify the Muslim headscarf and inspire young girls to be proud of their faith, thanks to the illustration work of an animation sophomore at The University of Texas at Dallas. 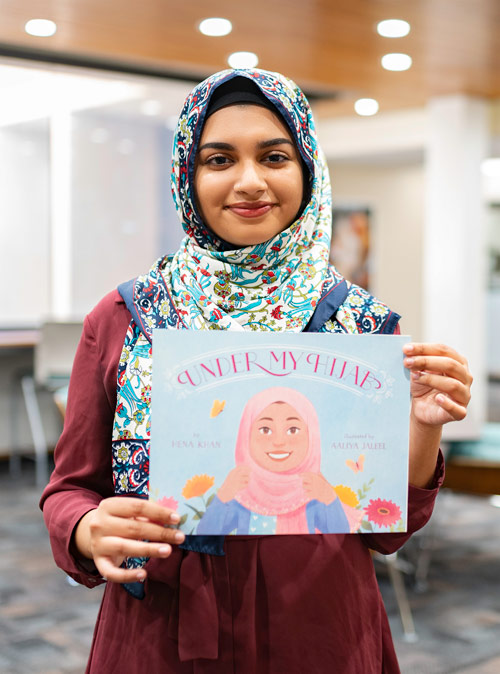 Aaliya Jaleel’s lively illustrations for Under My Hijab, which will be released later this month by Lee & Low Books, tell the story of a young girl inspired by the women and older girls in her life who wear the hijab in ways that reflect their personalities and styles. Written in rhyming text by Hena Khan, the book is intended to celebrate modern American Muslim women who choose to wear it.

“I hope this book helps others to understand better the diversity of women who wear the hijab, as well as give confidence to the young girls who don’t see themselves represented in media yet,” Jaleel said.

This is the second book — and the first with a professional publisher — that Jaleel has illustrated. She also illustrated a self-published book with her English teacher as a sophomore at Brighter Horizons Academy in Garland.

Sean McComber MFA’14, an assistant professor in the School of Arts, Technology, and Emerging Communication, saw Jaleel’s book illustrations in the conceptual phase when she was one of his students.

“I thought Aaliya’s drawings were very impressive, especially from someone so young. You could tell that a great deal of thought and consideration went into every aspect of her illustrations and compositions so that they would work with and reflect the story,” McComber said.

Cheryl Klein, the editor of Under My Hijab, found Jaleel’s artwork on a microblogging website and contacted her in summer 2017. Jaleel began working on the book last fall.

“From the moment I found Aaliya’s work on Tumblr, I was impressed by her varied, lively characterizations and her rich sense of color and pattern. Her style was a perfect match for the energy and sweetness of Under My Hijab, and it’s a thrill for everyone at Lee & Low to introduce her first book to the world,” Klein said.

Jaleel’s family sparked her interest in both wearing the hijab and becoming an artist. Born in Sri Lanka, Jaleel moved with her parents to the U.S. when she was 2. They lived in Boston before moving to Richardson six years ago.

Her grandmother taught her to do crafts and painting. By fourth grade, she was taking an adult still-life class. She has been drawing seriously since she was in the seventh grade.

“I thought Aaliya’s drawings were very impressive, especially from someone so young. You could tell that a great deal of thought and consideration went into every aspect of her illustrations and compositions so that they would work with and reflect the story.”

Sean McComber, an assistant professor in the School of Arts, Technology, and Emerging Communication

Jaleel started posting her art online when she was 12 and began meeting artists in the art/animation industry.

As a child, Jaleel sometimes felt self-conscious about her faith and appearance, so she could relate to the main character in Under My Hijab: a girl who goes through the day observing family members who wear the headscarf and gets inspired herself to also wear the hijab.

In the book, the young girl’s grandmother works in a bakery and wears the hijab in public but goes without it when she baked cookies at home. Her mother is a physician who wears the headscarf at work but gardens at home without it. Her aunt, an artist, wears the hijab turban-style.

“I liked being able to see different characters in the book wearing the hijab. Hopefully giving this to young girls will give them a big self-esteem boost,” Jaleel said.

Khan, the book’s author, described Jaleel’s illustrations in an interview as “simply stunning” and said they capture familiar elements of Muslim family life.

“She brings the characters to life on every spread, with the perfect balance of warmth and joy. I love the fact that the illustrations portray a modern interracial American Muslim family and that elements like the décor and backgrounds will be familiar to everyone,” Khan said.

Jaleel is now working on illustrating the book Muslim Girls Rise with Salaam Reads, an imprint of Simon & Schuster. The book will comprise 19 small biographies about progressive Muslim women.

For now, she’s anticipating the release of Under My Hijab as her contribution to the growing number of children’s Muslim fiction. Amazon lists the book as No. 1 in new releases in that category.

“I hope young girls will learn that it’s OK to be different, to be proud of their background and faith, and not to be deterred by people who want to see them as ‘other,’” Jaleel said.