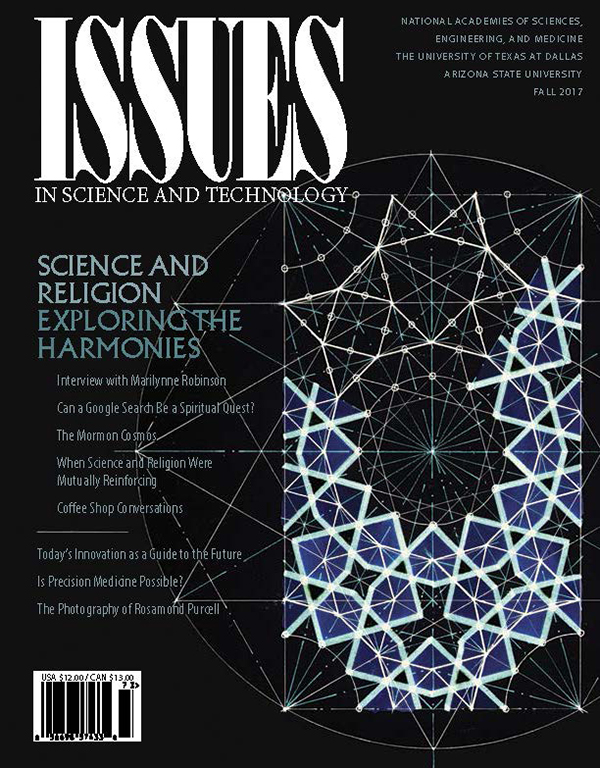 The potential of individualized medical care based on the use of genetics technology is greatly exaggerated, according to Kenneth M. Weiss, emeritus professor of anthropology and genetics from Penn State University. In the fall edition of Issues in Science and Technology, Weiss argues that the relationship between genes and disease is far too complicated to lend itself to magical cures.

Also in this issue, Jeffrey Funk offers a novel, helpful lens for looking at where most innovations are coming from these days. He recommends strengthening the links between science and technology.

As advocates of improving infrastructure stumble over how to finance it, John Helveston of Boston University offers a creative approach to funding highway investment: moving from a fuel tax — which is fast becoming unsustainable in the face of automotive innovations such as electric vehicles — to a “vehicle miles traveled” tax.

Several articles explore the harmonies between science and religion — ranging from an exploration of how both worked together to tackle childhood mortality in the 18th and 19th centuries to an interview with novelist and essayist Marilynne Robinson on how both can coexist in today’s culture. A related article provides a practical example of how religious principles can play a critical role in public consideration of climate engineering.

Also, Katharine L. Jacobs examines water issues in the West region of the United States in her review of John Fleck’s book “Water is for Fighting Over.” Frank Pasquale assesses the latest book from Andrew McAfee and Erik Brynjolfsson, “Machine, Platform, Crowd,” and finds their case for the benefits of machine learning is “overstated.”