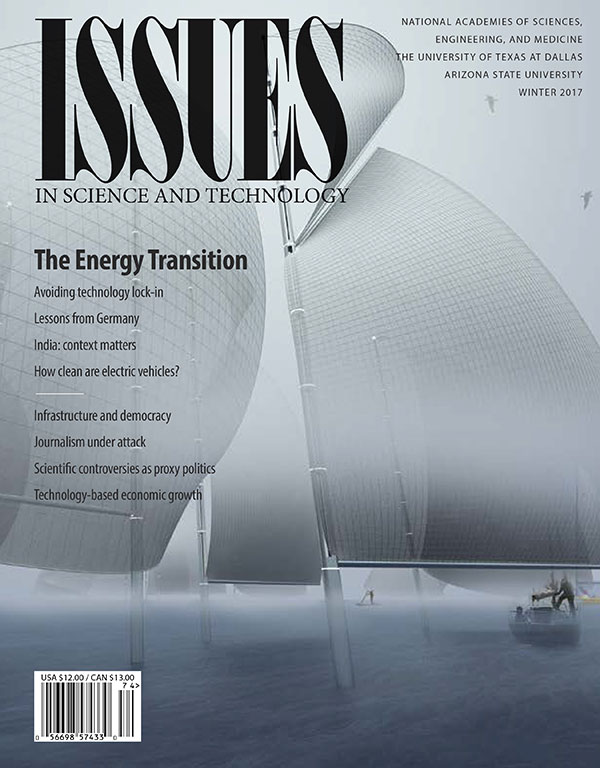 In the winter edition of Issues in Science and Technology, environmental journalist Keith Kloor describes a number of incidents in which advocacy groups have attacked reporters for citing reliable scientific evidence that undermined the claims of those who questioned the value of vaccines or the safety of genetically engineered crops.

Their tactics included ad hominem critiques of the journalists and Freedom of Information Act inquiries to determine whether scientists were talking to journalists. Kloor argues that these tactics are making it much harder to include the most trustworthy scientific information in news stories.

Varun Sivaram highlights the danger of technology “lock-in” as a barrier to continuous progress. Christine Sturm provides an insider’s view of the shortcomings of Germany’s green energy program. Kartikeya Singh takes a ground-level view of the challenges facing energy implementation in India, and Jack Barkenbus shows how the environmental benefits of electric vehicles can vary considerably from country to country and region to region.

Also, Christopher Jones and David Reinecke look back at the history of infrastructure investment in the United States and derive lessons for how Donald Trump can most effectively implement his promise to improve national infrastructure. Gregory Tassey provides a detailed analysis of the limits of monetary and fiscal policy as a means to boost economic growth, and explains how investment in research and technology is essential to boosting productivity and thus growing the economy. Daniel Hicks shows how even scientists use criteria other than scientific evidence in forming their policy positions.

Thomas Woodson explores how scientists can play a vital role in reducing racial tension. Robert Frodeman contributes the first article in what will be a series of short perspectives that examine the position of science in society and policymaking.