For the third time in two years, the First Person Cultural Trainer (FPCT), a research project from the UT Dallas Arts and Technology (ATEC) program, has won a national award for serious gaming.

FPCT received the Best Game award in the Government Category of the 2011 Serious Games Showcase and Challenge. FPCT is sponsored by U.S. Army Training and Doctrine Command G-2 Intelligence Support (TRADOC).  The Serious Games Showcase is part of the Interservice/Interindustry Training and Simulation Education Conference (I/ITSEC), and was held in Orlando, Fla., from November 28 through December 1.

Earlier in 2011, FPCT earned first place in the Innovations in DoD Gaming Competition at the GameTech Users’ Conference  in Orlando. In 2010, FPCT won the cross-function award from the National Training and Simulation Association (NTSA). 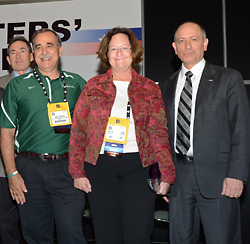 FPCT is a four-level immersive game that allows Army leaders and other appropriate personnel to practice culturally correct ways of interacting with different populations around the world.  The game features a variety of innovations, like a branching conversation system and methods for displaying nonverbal communication and environmental perception. The program can also be ported to different game engines with minimal redevelopment.

More than 50 games were entered in the I/ITSEC Serious Games contest, which had five categories – government, business, student, mobile and a special category, adaptive stance.  The work was reviewed by a panel of military, academic and industry gaming experts.  About 20,000 government, business, military and academic total registrants attend I/ITSEC every year. The conference is widely considered to be the largest and most competitive worldwide in modeling and simulation.

“This honor and the overall visibility that FPCT, UT Dallas and ATEC received at I/ITSEC this year is a real tribute to our sponsors at TRADOC, students,  faculty, project staff and administrators who have nurtured this project for going on four years,” said Dr. Marjorie Zielke, ATEC assistant professor.

Zielke is the associate director of the Institute for Interactive Arts and Engineering (IIAE) and principal investigator of the FPCT project.  Other faculty co-investigators on the project include Dr. Frank Dufour, assistant professor and director of the ATEC PhD program; Dr. Gopal Gupta, professor and head of the UT Dallas computer science department; and Dr. Thomas Linehan, professor and director of ATEC and the IIAE.  More than 20 students,  staff and faculty worked on the project for this development phase. The project has employed many more undergraduate, masters and PhD student developers over its four-year life cycle.

As part of the award, the development team received a kiosk display area at the conference where live gameplay was demonstrated to the large conference delegation.  Key developers from ATEC serious games projects gave demonstrations throughout the entire conference.

The developers were able to show the game to key government and business entities involved in modeling and simulation, including a representative from the White House, who visited the Serious Games pavilion to learn about national and international research in serious games.

In addition to winning the award, Zielke, Dufour and ATEC  Research Manager Gary Hardee presented a paper titled  “Creating Micro-expressions and Nuanced Nonverbal Communication in Synthetic Cultural Characters and Environments,” which highlighted some of the new FPCT development recently completed in October.

The First Person Cultural Trainer game designed by ATEC simulates the challenges a soldier might encounter on patrol in a village.

The video game simulates conversations with people that a soldier might meet, in this case a village elder.

The FPCT captures the sights and sounds of life in a specific deployment area.