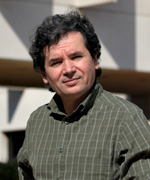 Dr. Ali Aliev, a research scientist at UT Dallas, and his colleagues recently demonstrated that transparent carbon nanotube sheets, which can have the density of air and the specific strength of steel, can be used to make objects invisible.

This invisibility for light oblique to the nanotube sheets is caused by the mirage effect, in which a thermally generated refractive index gradient bends light array from a hidden object. The paper was published in a recent issue of the journal Nanotechnology.

The findings created a flurry of press coverage, including stories in CNN, ABC and Wired magazine.

The study was conducted by a research team of the University of Texas at Dallas, USA.

Aliev is a research scientist at Alan G. MacDiarmid NanoTech Institute and adjunct professor at the Physics Department. He performed the experimental part of the work. Dr. Yuri N. Gartstein of the Physics Department performed supporting calculations. Dr. Ray H. Baughman (Robert A. Welch Distinguished Chair in Chemistry and Director of the Alan G. MacDiarmid NanoTech Institute) contributed to the analysis of results and writing.

This research work was supported by Office of Naval Research, NASA, the Air Force Office of Scientific Research and Robert A. Welch Foundation. More about authors can be found at the  NanoTech Institute website.

The mirage effect findings have created a flurry of news coverage in print, on the air and online: