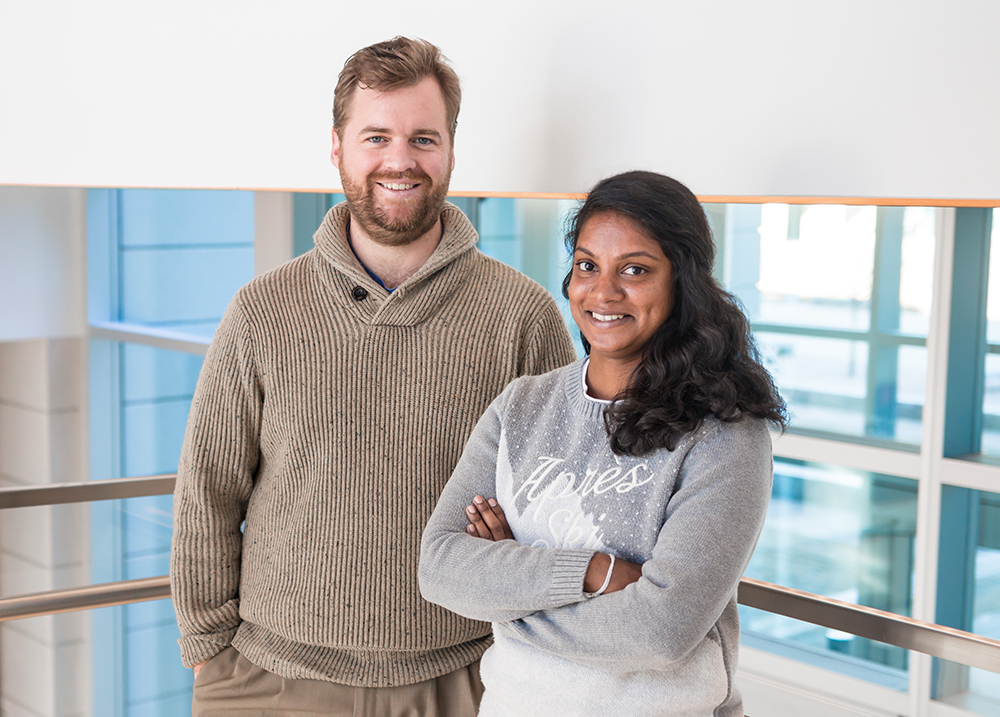 When it comes to the way scientists react to their discoveries, “That’s interesting” falls somewhere between “Eureka!” and “Uh-oh.”

“Interesting” is just what Dr. Jeremiah Gassensmith and his graduate student Madushani Dharmarwardana thought when they noticed unusual behavior in a sample of crystals they were working with in Gassensmith’s chemistry lab at The University of Texas at Dallas.

As part of her doctoral research, Dharmarwardana was investigating how the material, from a family of organic semiconducting materials called naphthalene diimides, changes color from orange to yellow as it is heated.

“We were looking at this material as a thermochromic semiconductor,” said Gassensmith, an assistant professor in the Department of Chemistry and Biochemistry in the School of Natural Sciences and Mathematics. “These types of semiconducting materials change color as temperature changes. Think of beer cans that change color when they’re cold or color-changing thermometer strips you put on your forehead to check for fever.”

As Dharmarwardana heated the tiny crystals — the samples were only about an eighth of an inch, or a couple of millimeters, in size — she noticed they would move, which was unexpected.

“The crystals would bend, coil, flex or jump, they would do all sorts of things,” Gassensmith said. “That was … interesting.”

Although such thermosalient behavior — also known as the jumping crystal effect — has been observed in other types of crystals, it had not been observed in this particular class of organic semiconducting crystals, Gassensmith said. Such behavior is of interest to researchers because it might be exploited for applications such as micromachines, sensors, or tiny actuators for medical devices and artificial muscles.

Dharmarwardana conducted a new set of experiments in which she glued down one end of the crystal to a glass cover slip and placed the slip on a hot plate.

Dharmarwardana observed that when heated, the semiconducting crystal was able to lift stainless steel balls almost 100 times heavier that itself. If you don’t see the video, watch it on Vimeo.

“As the plate heated up, the crystal always tried to bend away from the heat,” she said. “The explanation for this is that, once the crystal reaches a certain temperature, the arrangement of molecules within the crystal changes. Those changes move sequentially through the material, starting at the hot part that’s stuck to the surface and propagating out. This causes the crystal to change shape.”

“We see colossal expansion in these materials, almost 20 percent in size,” Gassensmith said. “That’s among the largest percentage change seen in an organic material.”

In her next set of experiments, Dharmarwardana glued tiny stainless steel balls to the anchored crystals to see how much weight the crystal cantilevers could lift as they were heated. Because the crystals are brittle, she expected them to break under the load.

“It amazed me when I saw it was actually lifting the ball because the crystal is very small compared to the weight, which was almost 100 times heavier than the crystal,” Dharmarwardana said. “When I designed the experiment, I never thought it would lift up. I thought it would break the crystal.”

The maximum load lifted with a 3.5 millimeter-long crystal cantilever was about 4 milligrams, to a height of 0.24 millimeters.

As the crystal cooled, it lowered and became straight once more. While reheating the material did not result in another shape change, the material continued to change color with repeated temperature changes.

“This isn’t a reversible transformation,” Gassensmith said. “Basically, the crystal starts out loaded with the potential energy to change shape and carry out the motion, but it holds on to that energy until the material reaches a phase transition temperature. At that point, the crystal wants to release this energy. If it is not bound to anything, the crystal will just pop or curl, but by fixing it on one end, we can direct how that energy is released.

“It’s still a single crystal, but its molecules are now in a different packing arrangement that has a lower energy.”

Gassensmith said the next step is to further investigate different variations of the material, including whether the bending behavior of the materials can be incorporated into color-changing sensors or act as a mechanical breaker inside organic electronics.

“It will be interesting to see whether we can induce curling in these crystals electronically,” he said. “In principle, we should be able to apply an electric current to lift things, instead of using a bunch of heaters.”

The researchers have filed a patent and are pursuing licensing opportunities for the technology for commercial applications.

The findings are described in a September issue of the journal Chemical Communications. Other UT Dallas researchers on the paper are doctoral students Raymond Welch (chemistry) and Sunah Kwon (materials science and engineering); Victoria Nguyen, a senior in biochemistry; and X-ray facilities manager Dr. Greg McCandless, along with Dr. Mohammad Omary, professor of chemistry at the University of North Texas.

The research was funded by the American Chemical Society’s Petroleum Research Fund.