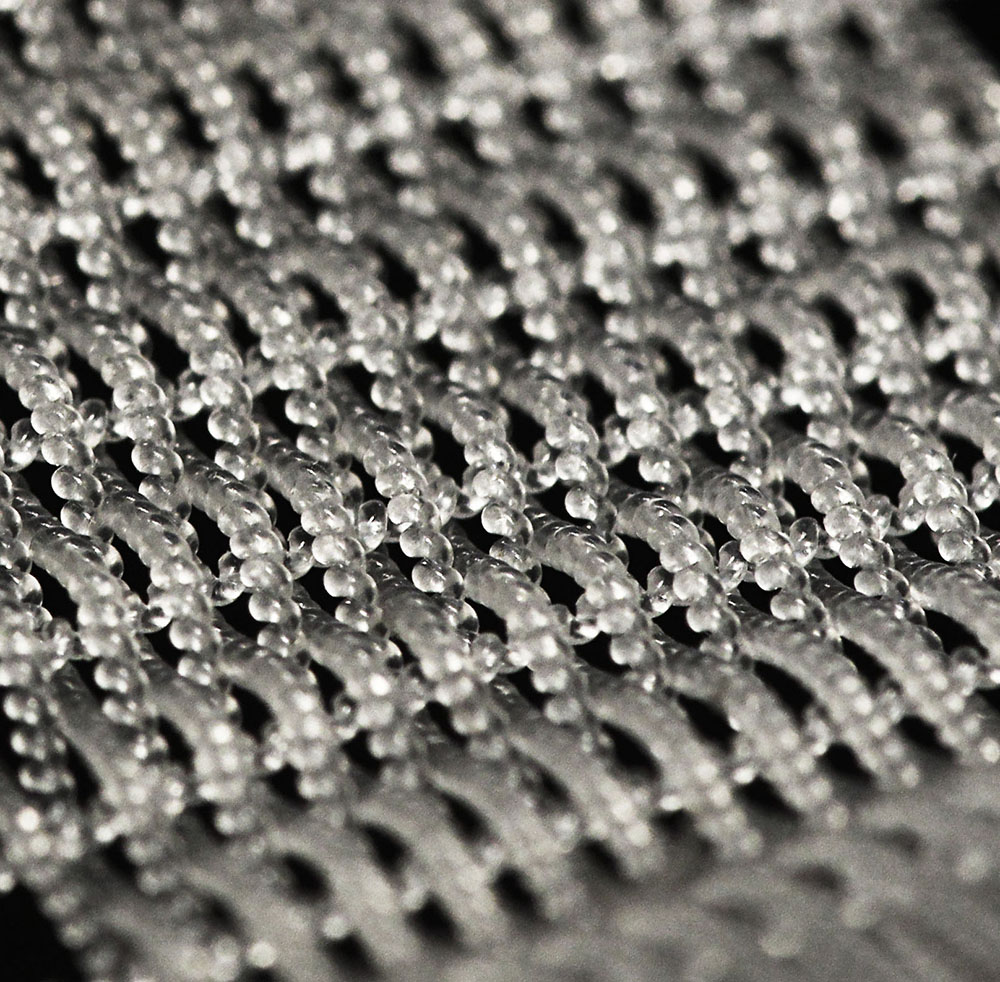 UT Dallas scientists produced the fibers in this woven textile by highly twisting nylon sewing thread to produce coiled artificial muscles. The coiled muscles can contract by over 30 percent when thermally or electrically heated, and might one day be used to make intelligent textiles, such as clothing that adjusts its porosity in response to temperature.

In recent years, researchers at The University of Texas at Dallas and colleagues at the University of Wollongong in Australia have put a high-tech twist on the ancient art of fiber spinning, using modern materials to create ultra-strong, powerful, shape-shifting yarns.

In a perspective article published Sept. 26 online in the Proceedings of the National Academy of Sciences, a team of scientists at UT Dallas’ Alan G. MacDiarmid NanoTech Institute describes the path to developing a new class of artificial muscles made from highly twisted fibers of various materials, ranging from exotic carbon nanotubes to ordinary nylon thread and polymer fishing line.

Because the artificial muscles can be made in different sizes and configurations, potential applications range from robotics and prosthetics to consumer products such as smart textiles that change porosity and shape in response to temperature.

“We call these actuating fibers ‘artificial muscles’ because they mimic the fiber-like form-factor of natural muscles,” said Dr. Carter Haines BS’11 PhD’15, associate research professor in the NanoTech Institute and co-lead author of the PNAS article, with research associate Dr. Na Li. “While the name evokes the idea of humanoid robots, we are very excited about their potential use for other practical applications, such as in next-generation intelligent textiles.”

Science Based on Ancient Art

Spinning animal fur and plant fibers to make thread and yarn goes back thousands of years. Aligning the fibers and then twisting them into yarn gives the yarn strength.

By exploiting this concept, and adding 21st-century science, the UT Dallas researchers have produced actuating muscle yarns that, like their wooly counterparts, can be woven, sewn and knitted into textiles.

For example, carbon nanotubes are essentially tendrils of tiny, hollow tubes that are super-strong and electrically conductive. In 2004, led by Dr. Ray Baughman, director of the NanoTech Institute and the Robert A. Welch Distinguished Chair in Chemistry at UT Dallas, the team developed a method to draw “forests” of nanotubes out into sheets of aligned fibers — much like carded wool — and then twist the sheets into yarns.

When heated and cooled, spiral-shaped artificial muscles expand and contract back and forth.

Next, the group turned to polymer fibers such as nylon sewing thread and fishing line, which consist of many individual molecules aligned along the fiber’s length. Twisting the thread or fishing line orients these molecules into helices, producing torsional — or rotational — artificial muscles that can spin a heavy rotor more than 100,000 revolutions per minute.

When these muscles are so highly twisted that they coil like an over-twisted rubber band, they can produce tensile actuation, where the muscle dramatically contracts along its length when heated, and returns to its initial length when cooled. That research, published in 2014, showed that simple, low-cost muscles made from fishing line can lift 100 times more weight and generate 100 times higher mechanical power than a human skeletal muscle of the same length and weight.

“The success of our muscles derives from their special geometry and the fact that we start with materials that are anisotropic — when they are heated, the materials expand in diameter much more than they expand along their length,” said Baughman, senior author of the PNAS perspective. This anisotropy is an intrinsic property of high-strength polymer fibers, and is the same principle that drives powerful artificial muscles the researchers discovered in 2012, which they made by adding a thermally responsive “guest” material within a carbon nanotube yarn.

“When these fibers are then twisted and coiled, their internal geometry changes so that when they are heated, that diameter expansion results in a change in length,” Baughman said. “The fiber’s diameter only has to expand by about 5 percent to drive giant changes in length.”

In their most recent experiments, described for the first time in the PNAS article, Haines and Li added a new twist to their artificial muscles.

“The coiled artificial muscles we initially made from fishing line and nylon sewing thread were limited in the amount they could expand and contract along their length,” Haines said. “Because of their geometry — like a phone cord — they could only contract so far before the coils began to collide with one another.”

The solution: Form the coiled actuators into spirals.

“The advantage to the spiral shape is that now our muscle can contract into a flat state, expand out in the other direction, and return to its original length, all without getting stuck on itself,” Li said. “Our experiments to date have been proof-of-concept, but have already shown that we can use heating and cooling to drive this back-and-forth motion across a giant range. This type of telescoping actuator can produce over an 8,600 percent change in length, compared to around 70 percent for our previous coils.”

Li said one potential application for the spiral-shaped coil might be thermally responsive clothing. Instead of a down-filled jacket, a coat that incorporates many small coils could change the loft and insulating power of the garment in response to temperature.

In the laboratory, Haines and Li have produced spools of coiled polymer muscle threads suitable for sewing. “We have shown that these thermally responsive fibers can be used in conventional machines, such as looms, knitting machines and sewing machines,” Li said. “As we move forward with our research, and scale it up, we hope to incorporate our ideas into functional fabrics and textiles for a variety of purposes, from clothing to environmentally responsive architecture to dynamic art sculptures.”

The group's research is supported by the Air Force Office of Scientific Research, the Robert A. Welch Foundation and the Australian Research Council.