Researchers at The University of Texas at Dallas are pushing the boundaries of science as they investigate how everyday thunderstorms influence “space weather” occurring where Earth’s atmosphere meets the void.

Dr. Rod Heelis, director of UT Dallas’ William B. Hanson Center for Space Sciences, and his colleagues recently were chosen to design and build an experiment that will fly onboard a new NASA satellite mission called the Ionospheric Connection Explorer (ICON). 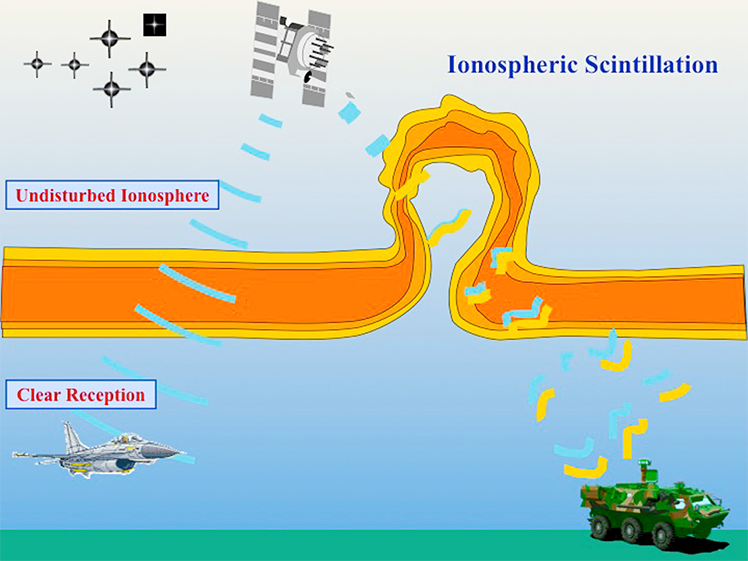 Click to enlarge: When high-frequency radio waves, such as those used for the Global Positioning System (GPS), travel through a disturbed layer of Earth’s electrically charged atmosphere (the ionosphere), they can be disrupted. Source: U.S. Air Force Research Laboratory.

The ICON satellite, slated for launch in 2017, will orbit about 350 miles above Earth, in a region of the upper atmosphere called the ionosphere. The satellite will carry a suite of instruments built by various institutions, including UT Dallas.

As the name suggests, the ionosphere consists of charged particles called ions, which are created when high-energy sunlight strips away electrons from atmospheric gases, such as nitrogen and oxygen. Just as the movement of air in Earth’s lower atmosphere drives surface weather, a mixture of neutral gasses, ions and free electrons in the ionosphere move around and create “space weather.”

There’s a practical reason why scientists – including those at UT Dallas – have been studying the ionosphere for decades, said Heelis, an expert on space weather who has been on the faculty since 1973.

“Disturbances and turbulence in this region interfere with radio signals, as well as GPS signals used in navigation. So predicting when and where interference will occur is a high priority,” said Heelis, who holds the Distinguished Chair in Natural Sciences and Mathematics.  “A better understanding of the dynamics of the ionosphere and the factors that affect it will help us develop models to more accurately forecast space weather.” 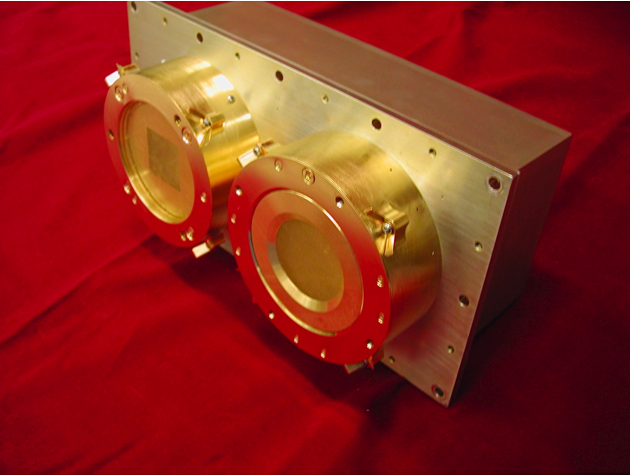 An ion velocity meter built by UT Dallas space scientists, similar to the one pictured above, will fly onboard a satellite as part of a new NASA satellite mission to study space weather.

Until recently, scientists thought that the sun was the sole driver of space weather. Evidence is mounting, however, that the Earth’s surface weather, such as run-of-the-mill thunderstorms, also can affect the ionosphere.

It’s this interaction between surface weather and space weather that is the focus of the ICON mission. The UT Dallas instrument is called the Ion Velocity Meter. It will gather data at the site of the spacecraft, such as the velocity, temperature and density of ions, while other instruments will remotely measure the state of the neutral atmosphere below the satellite, Heelis said.

“This is an exciting opportunity to discover the reasons for the connections between surface weather and space weather that have only come to light in the last 10 years,” he said.

NASA is funding the ICON mission through the space agency’s Explorer program. Scientists at the Space Sciences Laboratory at the University of California, Berkeley will oversee the mission, while UT Dallas, the U.S. Naval Research Laboratory and the University of Illinois at Urbana-Champaign will provide experiments. In addition, scientists from the National Center for Atmospheric Research and Atmospheric & Space Technology Research Associates will participate in the data interpretation.

Dr. Rod Heelis, Distinguished Chair in Natural Sciences and Mathematics and director of the William B. Hanson Center for Space Sciences at UT Dallas, has been appointed to the Space Studies Board, an independent panel of experts that provides advice to the federal government on all aspects of space science and applications.

The Space Studies Board is composed of prominent scientists, engineers, industrialists, scholars and policy experts in space research. Since its inception in 1958, the board has provided independent expert advice to NASA and other agencies, including the National Oceanic and Atmospheric Administration, the National Science Foundation, the U.S. Geological Survey, the Department of Defense and the U.S. Congress.

“I was surprised and honored just to be nominated for a position on the board,” said Heelis, an expert on the interaction between the sun and planetary environments. “It’s a tremendous privilege to be appointed.”

Heelis will attend his first meeting of the board in November.

Dr. Lloyd Berkner, a prominent atmospheric scientist who served as chair of the Space Studies Board from its inception in 1958 until 1962, was recruited in the early 1960s by the founders of Texas Instruments to be the first president of the Graduate Research Center of the Southwest, which in 1969 became UT Dallas.

“Lloyd Berkner has a legacy that goes back a long way,” Heelis said. “He started the flood of very notable scientists that have come to UT Dallas since the earliest days of our history. It’s an honor to contribute to that tradition.”