This scanning electron microscope image shows a coiled unipolar muscle made from carbon nanotubes and coated with poly(sodium 4-styrenesulfonate). The outer coil diameter is approximately 140 microns, about twice that of a human hair.

For more than 15 years, researchers at The University of Texas at Dallas and their collaborators in the U.S., Australia, South Korea and China have fabricated artificial muscles by twisting and coiling carbon nanotube or polymer yarns. When thermally powered, these muscles actuate by contracting their length when heated and returning to their initial length when cooled. Such thermally driven artificial muscles, however, have limitations.

“Electrochemically driven muscles are especially promising, since their energy conversion efficiencies are not restricted by the thermodynamic heat engine limit of thermal muscles, and they can maintain large contractile strokes while supporting heavy loads without consuming significant energy,” said Dr. Ray Baughman, the Robert A. Welch Distinguished Chair in Chemistry and director of the Alan G. MacDiarmid NanoTech Institute at UT Dallas. “In contrast, human muscles and thermally powered muscles need a large amount of input energy to support heavy loads even when not accomplishing mechanical work.”

In a study posted in the Jan. 29 issue of Science, the researchers describe creating powerful, unipolar electrochemical yarn muscles that contract more when driven faster, thereby solving important problems that have limited the applications for these muscles.

Electrochemically powered CNT yarn muscles are actuated by applying a voltage between the muscle and a counter electrode, which drives ions from a surrounding electrolyte into the muscle. 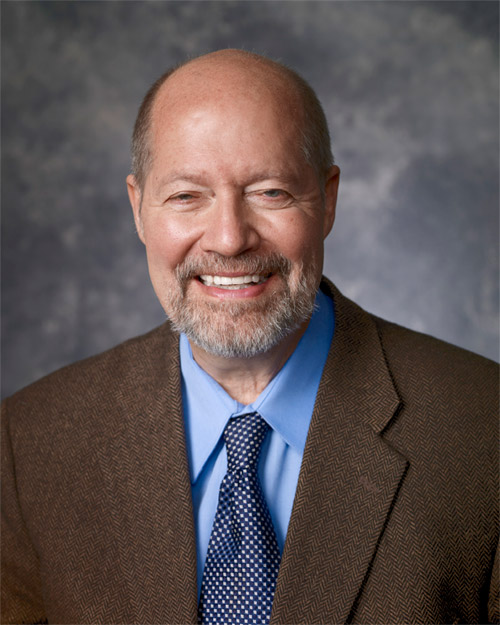 “This polymer coating converts the normal bipolar actuation of carbon nanotube yarns to unipolar actuation, where the muscle actuates in one direction over the entire stability range of the electrolyte. This long-sought behavior has surprising consequences that make electrochemical carbon nanotube muscles much faster and more powerful.”

Dr. Ray Baughman, the Robert A. Welch Distinguished Chair in Chemistry and director of the Alan G. MacDiarmid NanoTech Institute at UT Dallas

Another issue: A given electrolyte is stable only over a particular range of voltages. Outside this range, the electrolyte breaks down.

“Previous yarn muscles cannot use the full stability range of the electrolyte,” said Baughman, a corresponding author of the study. “Also, the muscle’s capacitance — its ability to store the charge needed for actuation — decreases with increasing potential scan rate, causing the muscle’s stroke to dramatically decrease with increasing actuation rate.”

To solve these problems, the researchers discovered that the interior surfaces of coiled carbon nanotube yarns could be coated with a suitable ionically conducting polymer that contains either positively or negatively charged chemical groups.

“This polymer coating converts the normal bipolar actuation of carbon nanotube yarns to unipolar actuation, where the muscle actuates in one direction over the entire stability range of the electrolyte,” Baughman said. “This long-sought behavior has surprising consequences that make electrochemical carbon nanotube muscles much faster and more powerful.”

Chemistry doctoral student Zhong Wang, a co-first author of the study, explained the underlying science: “The dipolar field of the polymer shifts the potential of zero charge — which is where the electronic charge on the nanotubes changes sign — to outside the electrolyte’s stability range. Hence, ions of only one sign are electrochemically injected to compensate this electronic charge, and the muscle’s stroke changes in one direction over this entire useable potential scan range.” 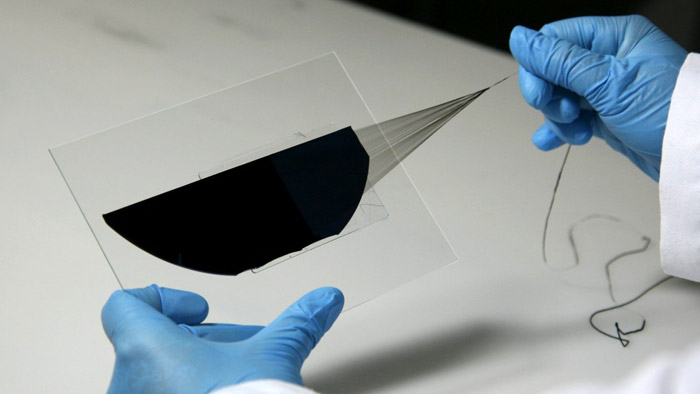 The Alan G. MacDiarmid NanoTech Institute, established in 2001 at UT Dallas, is dedicated to original science and technological discoveries on the nanoscale. Learn more about the institute, its research and how to get involved on its website.

The advances provide electrochemical unipolar muscles that contract to generate a maximum average output mechanical power per muscle weight of 2.9 watts/gram, which is about 10 times the typical capability of human muscle and about 2.2 times the weight-normalized power capability of a turbocharged V-8 diesel engine.

The polymer coating used to produce these results was poly(sodium 4-styrenesulfonate), which is approved for drug use and inexpensive enough for use in water softening. Incorporation of this polymer guest enabled practical operation of a carbon nanotube muscle from high temperatures to below minus 30 degrees Celsius.

Wang said the team also discovered that unipolar behavior, without scan-rate enhanced strokes, could be obtained when graphene oxide nanoplatelets were incorporated within the yarn muscle using a biscrolling process that UT Dallas researchers created and patented.

“Use of this guest to provide the dipolar fields needed for unipolar behavior increased the maximum average contractile mechanical power output from the muscle to a remarkable 8.2 watts/gram, which is 29 times the maximum capability of the same weight human muscle and about 6.2 times that of a turbocharged V-8 diesel engine,” Wang said.

“We also discovered that two different types of unipolar yarn muscles, each with scan-rate-enhanced strokes, can be combined to make a dual-electrode, all-solid-state yarn muscle, thereby eliminating the need for a liquid electrolyte bath,” Wang said. “A solid-state electrolyte is used to laterally interconnect two coiled carbon nanotube yarns that contain different polymer guests, one having negatively charged substituents and the other having positively charged substituents. Both yarns contract during charging to additively contribute to actuation, because of the injection of positive and negative ions, respectively. These dual electrode unipolar muscles were woven to make actuating textiles that could be used for morphing clothing.”

The inventors have applied for a provisional U.S. patent on the technology.

In addition to Baughman, corresponding authors are Dr. Jianning Ding of Jiangsu University and Dr. Jinsong Leng of Harbin Institute of Technology. The first author, Dr. Hetao Chu, is currently at Sichuan University.

The research in the U.S. was supported by the Air Force Office of Scientific Research, The Welch Foundation, and the Defense Advanced Research Projects Agency’s SHort-Range Independent Microrobotic Platforms (SHRIMP).