Researchers from The University of Texas at Dallas and UT Southwestern Medical Center are investigating new ways to use old mobile phone technology to help first responders in developing countries reduce the time it takes to transport traffic accident victims to hospitals.

Part of the research involves using data collection methods to identify areas of large cities that are prone to traffic-related injuries but lack information to allocate limited resources optimally. 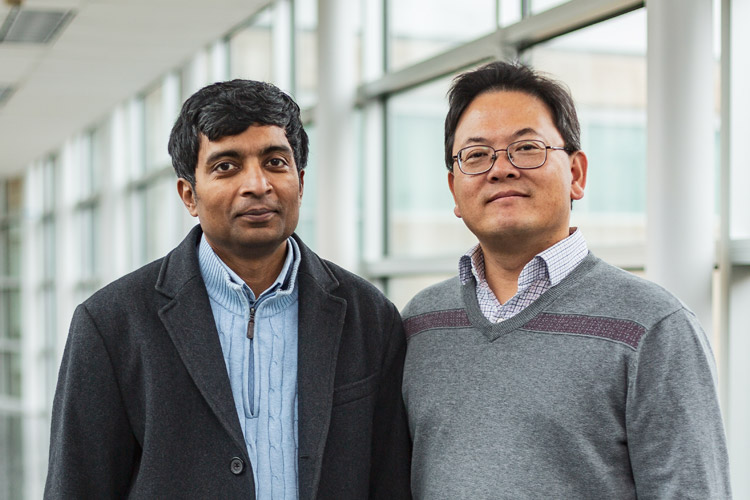 UT Dallas professors Dr. Latifur Khan (left) and Dr. Dohyeong Kim are part of a research team that received a National Institutes of Health grant to improve the accuracy of traffic accident locations in developing countries.

“We are assisting in the area of injury research,” said Dr. Dohyeong Kim, associate professor of public policy and political economy and of geospatial information sciences in the School of Economic, Political and Policy Sciences at UT Dallas. “We want to use traditional cellphone technology in wide use in these countries to provide more accurate accident location information to first responders.”

Kim and Dr. Fiemu Nwariaku, professor of surgery and associate dean of global health at UT Southwestern, are co-principal investigators on a $427,000, two-year grant from the National Institutes of Health’s Fogarty International Center (grant R21TW010991) to promote health across the globe. Kim and Nwariaku will spend the next two years developing ways to leverage existing, low-cost mobile phone technology in Lagos, Nigeria, to help roadway accident victims.

The project has two goals. The first is to improve the accuracy of accident locations by integrating Unstructured Supplementary Service Data (USSD) technology with data scraping applied to social media messages.

“Most Nigerians are still using old-fashioned flip phones with USSD technology,” said Dr. Latifur Khan, co-collaborator and professor of computer science in the Erik Jonsson School of Engineering and Computer Science at UT Dallas. “USSD does not require the use of the internet nor the web. It is ‘baked’ into every basic mobile phone on the Global System for Mobile Communications network.”

“Once we get the locations of all the accidents over a certain period of time, we can create interactive maps showing the locations of roadway accidents and identify spatial patterns. We can use that information to help officials allocate resources and dispatch an ambulance to problematic locations. We can also recommend where to expand congested roadways or pave new ones and suggest where new hospitals should be built.”

When a user sends a USSD message to a phone company’s computer network — to check a bank account balance, for example — the message is received by a computer dedicated to USSD. The computer’s response is sent back to the phone, in a basic format. The technology is used primarily for basic services in mobile networks.

Despite its basic functions, USSD can drive the data collection process from social media websites such as Facebook and Twitter. When an accident is reported through USSD, network-attached geolocation information is also submitted to the system.

“From there, we can initiate a search on geolocated tweets originating from nearby places that are relevant to the accident. It can help pinpoint the location of the accident and assess its severity,” Khan said.

Researchers chose to exploit the old technology because most Nigerians do not own smartphones, which are equipped with advanced geolocators.

“Our goal is to see if we can pair the USSD technology that they have with social-media mining algorithms to enhance location accuracy,” Khan said.

The second goal of the project is to identify hotspots where wrecks often occur. From there, researchers will develop interactive maps for ambulance teams with the aim of reducing transport times to a hospital. 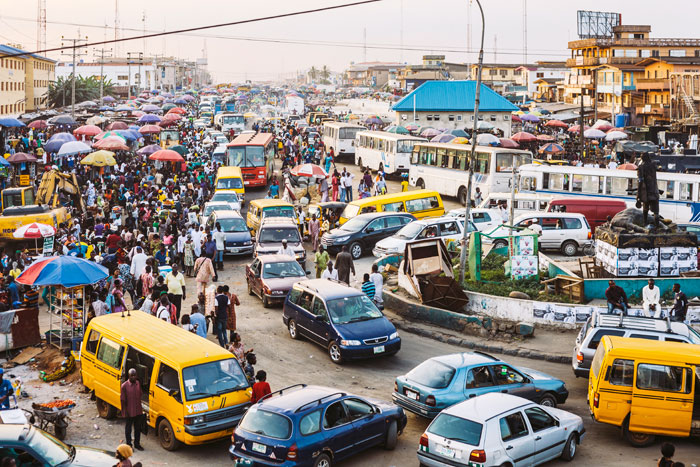 For their study, researchers will examine Lagos, Nigeria, one of the largest cities in the world and where traffic control systems present many challenges for first responders. Most Nigerians do not own phones equipped with advanced geolocators, so researchers will exploit technology in old-fashioned flip phones.

“Once we get the locations of all the accidents over a certain period of time, we can create interactive maps showing the locations of roadway accidents and identify spatial patterns,” Kim said. “We can use that information to help officials allocate resources and dispatch an ambulance to problematic locations. We can also recommend where to expand congested roadways or pave new ones and suggest where new hospitals should be built.”

Nigeria, like many developing countries, has undermanaged and underdeveloped traffic control systems. Roads typically don’t have street names nor numbers attached to a specific location, making it almost impossible to direct emergency ambulance crews. Witnesses must resort to using vague terminology to describe their location, such as the intersection of a road and river. As a result, many Nigerians die not because of the severity of the road accident, but because of delayed response or delayed delivery to a trauma center, according to the researchers.

They also said that time is critical in treating a traumatic injury. Emergency medical service needs to be on-site within 10 to 20 minutes, and the victim needs to get to a trauma center within an hour. Otherwise, the chance of survival is very low.

Once the study is completed, Kim said, researchers hope to improve the timeliness and accuracy of road-traffic injury reporting beyond Nigerian borders.

“We believe this technology will represent a paradigm shift in data collection that serves as a model for many low- and middle-income countries,” Kim said. “In the end, we believe it could save hundreds of thousands of lives.”

Co-collaborators on the study include researchers from Johns Hopkins University, Visual Earth and the Lagos State Government Ministry of Health.