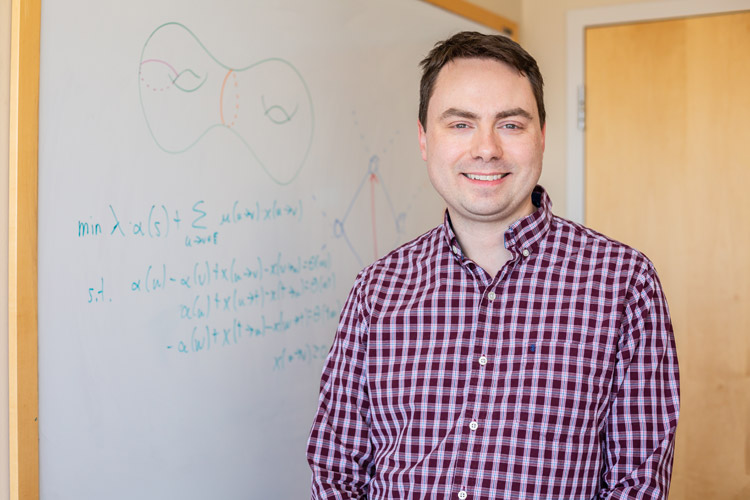 Dr. Kyle Fox studies algorithmic foundations of computer science and their relationship to geometry and topology.

Dr. Kyle Fox, assistant professor of computer science in the Erik Jonsson School of Engineering and Computer Science at The University of Texas at Dallas, recently received a five-year, $586,654 National Science Foundation Faculty Early Career Development (CAREER) Award to explore how the mathematical field of topology can be used to design more efficient and faster algorithms to solve difficult problems.

Topology is the study of the properties that geometric objects maintain after undergoing certain changes. In a commonly used example, a coffee cup can be reshaped into a doughnut yet still retain similar properties, such as having one hole. Computational topology, the study of computer algorithms for topological problems, is an emerging field. Fox, who joined the University in 2017, researches algorithmic foundations of computer science and their relationship to geometry and topology.

“The goal of this project is to take that idea further to figure out what we can use from topology to design faster algorithms; what structure do you really need in a graph?”

Computer scientists often use graphs to study the relationships between objects and to design algorithms, or sets of instructions, to solve problems, such as finding the shortest path from point A to point B. Fox is exploring how topology can be used to understand structural properties of graphs better — and as a result allow faster computations as part of his project “Exploiting Topology in Graph Algorithm Design.”

“The goal of this project is to take that idea further to figure out what we can use from topology to design faster algorithms; what structure do you really need in a graph?” Fox said.

More efficient algorithms are needed, he said, because datasets are increasing in size faster than the ability to increase the raw speed of computers. The algorithms can be used to solve a variety of problems, such as planning the fastest truck delivery routes or how to route data through a communications network efficiently.

“The need for efficient algorithms to solve complex data-science problems is greater than ever, given that datasets are becoming increasingly larger,” said Dr. Gopal Gupta, professor of computer science and holder of the Erik Jonsson Chair at UT Dallas. “Dr. Fox’s research will advance our understanding of how topology can be used to design algorithms with lower complexity and faster execution times for processing really large amounts of graph data.”

Fox will use the grant to support graduate students and undergraduate researchers, as well as to develop a new course in computational topology, which will be offered for the first time in the fall.