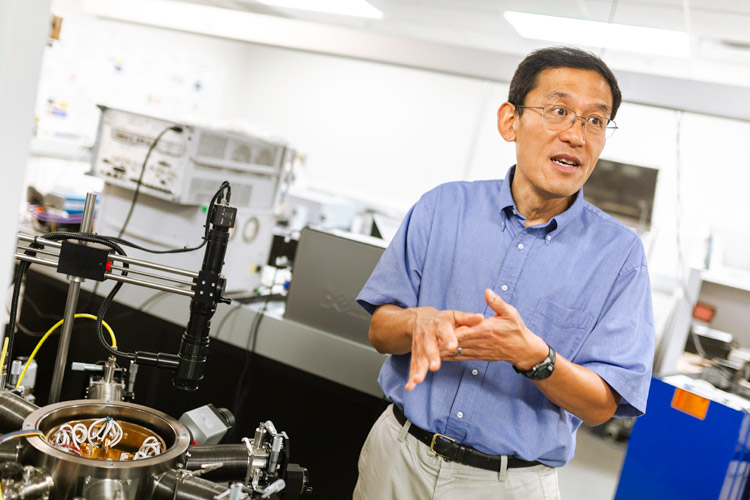 Dr. Mark Lee (pictured in 2019), professor of physics in the School of Natural Sciences and Mathematics at UT Dallas, and his team have been working with Texas Instruments to create practical, cost-effective thermoelectric generators. Their most recent generator can power an Internet of Things device by recycling ambient waste heat from a warm copper rod.

Electronic sensors can report data from a variety of remote locations as long as they have power. The challenge is providing safe, reliable power when there’s no wall plug, no light for solar panels and no access to replace a battery.

Researchers at The University of Texas at Dallas, in partnership with Texas Instruments, are using a combination of silicon and germanium in a way that harnesses waste heat to provide enough power to run commercial electronic devices.

In a study published Aug. 31 in Nature Communications, they show that their tiny thermoelectric generators can provide a practical, cost-effective and mass-producible solution for producing power from only a relatively small difference in temperature.

“These new results meet a metric that’s quite important for actual practical applications,” said Dr. Mark Lee, professor of physics in the School of Natural Sciences and Mathematics and senior author of the paper. “By incorporating 3% germanium into a silicon-based microelectronic thermoelectric generator, we can generate enough voltage and current to power a commercial Internet of Things device using nothing more than a warm copper rod as the energy source.”

Defined broadly, Internet of Things (IoT) devices are embedded with sensors, communications electronics and other software that connect remotely and exchange data with other devices and systems.

“These devices are made with the understanding that they will be deployed somewhere without much energy available,” Lee said. “As such, they’ve been designed to operate at the lowest possible energy level.”

“By incorporating 3% germanium into a silicon-based microelectronic thermoelectric generator, we can generate enough voltage and current to power a commercial Internet of Things device using nothing more than a warm copper rod as the energy source.”

Dr. Mark Lee, professor of physics in the School of Natural Sciences and Mathematics

Thermoelectric generators recycle ambient waste heat — such as the warmth that comes off an asphalt road in the sunlight or due to the friction from cars driving on the road — into electrical power.

“The great potential for these generators is in recovery and utilization of waste heat from other electronic devices,” said Prabuddha Madusanka, a UT Dallas physics doctoral student and co-lead author of the study.

Existing thermoelectric generators are bulky, contain rare or toxic elements, and are incompatible with silicon integrated circuit fabrication technology, all of which prevent their large-scale use in microelectronics, said Ruchika Dhawan, a UT Dallas physics doctoral student and co-lead author of the study.

Although silicon has many advantageous electrical properties that make it the workhorse material in today’s microchips, it also has a high thermal conductivity, which means it transfers heat very well. “This property is its drawback for use in the generation of electricity,” Dhawan said.

What is needed is a thermoelectric generator that contains a material that works well with silicon to reduce its thermal conductivity, is inexpensive and can be easily incorporated into the standard industrial device-making process.

Lee said that IoT devices generally require a minimum of 1.6 to 1.8 volts and a minimum current of about 2 microamps. The team’s new silicon-germanium thermoelectric generators can produce this operating in an environment at ordinary room temperature (about 23 degrees Celsius or 73 degrees Fahrenheit) from a copper rod warmed to as low as 45 C (113 F).

“That’s where we’ve crossed a new threshold: by demonstrating commercial viability of this technology,” Lee said.

The design and fabrication of IoT devices incorporating thermoelectric generators was handled by the Texas Instruments team, led by Hal Edwards, a TI Fellow at the company. He explained that hundreds of individual thermoelectric generators, each about the size of a grain of salt, are combined to form what he referred to as a macroscopic harvester.

“By stacking hundreds of tiny harvesters electrically in series, like tiny batteries, we achieved a high enough voltage to turn on actual microchips — in this case, a commercially purchased low-power ambient light sensor and a power management integrated circuit,” Edwards said. “It’s a nice demonstration that this exploratory research project actually generated useful power, making it a real technological proof of concept. There’s no reason we couldn’t make the generator even larger if needed.”

Lee described UT Dallas’ alliance with TI as critical: “No university can truly replicate modern industrial silicon fabrication, which is an integral part of proving the feasibility of a proposed method.

“Researchers might fabricate a single item with a method that is, in principle, compatible with silicon CMOS (complementary metal-oxide-semiconductor) technology. In our case, however, TI fabricated this on an existing production line, and we followed all the rules — not in just principle — it’s compatible in practice.”

UT Dallas alumnus Gangyi Hu PhD’19 is also among the paper’s authors, along with researchers from Texas Instruments. The work was supported by the National Science Foundation through the Grant Opportunities for Academic Liaison with Industry (GOALI) program and by TI.