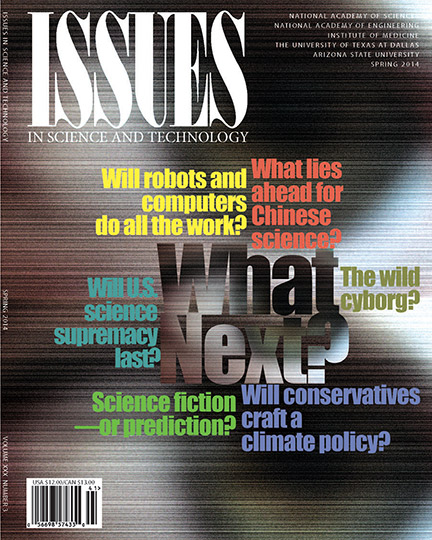 Issues in Science and Technology tackles the question,"What next?" in its spring 2014 edition.

A review of research in robotics and information technology in the spring edition of Issues in Science and Technology indicates that within the next 10 to 20 years, a combination of technologies will be capable of performing the jobs of as many as 80 percent of current workers.

Workforce changes on this scale in agriculture and manufacturing have occurred before, but never at this pace. The critical question raised by Stuart W. Elliott of the National Research Council in “Anticipating a Luddite Revival” is whether social systems can adapt quickly enough to the disruption that technology can cause.

If this means that the economy will need to create more highly skilled jobs that cannot be done by machines, Elliott asks whether we have the ability to train enough people capable of performing at this high level.

Also in the spring 2014 edition of Issues:

Steven F. Hayward on Climate Change — Political conservatives have been vehement opponents of liberal proposals for government action to combat climate change, but they have been criticized for not articulating an alternative strategy. Steven F. Hayward, a visiting scholar at the University of Colorado, accepts the challenge with a critique of scientific arrogance and an approach built on fundamental democratic principles.

Global Leader in Science — The United States’ position as the undisputed global leader in science is being threatened by constrained financial support at home and rising research investments abroad, particularly in China. University of Michigan sociologist Yu Xie assesses the current position of the U.S. Jumbo Yu of Jilin University in Changchun, China, takes a look at China’s plan to become a force at the forefront of science.

This edition of Issues also includes its first piece of science fiction. Novelist and University of California astrophysicist Gregory Benford explores what might happen if we decide to experiment with geoengineering the climate.