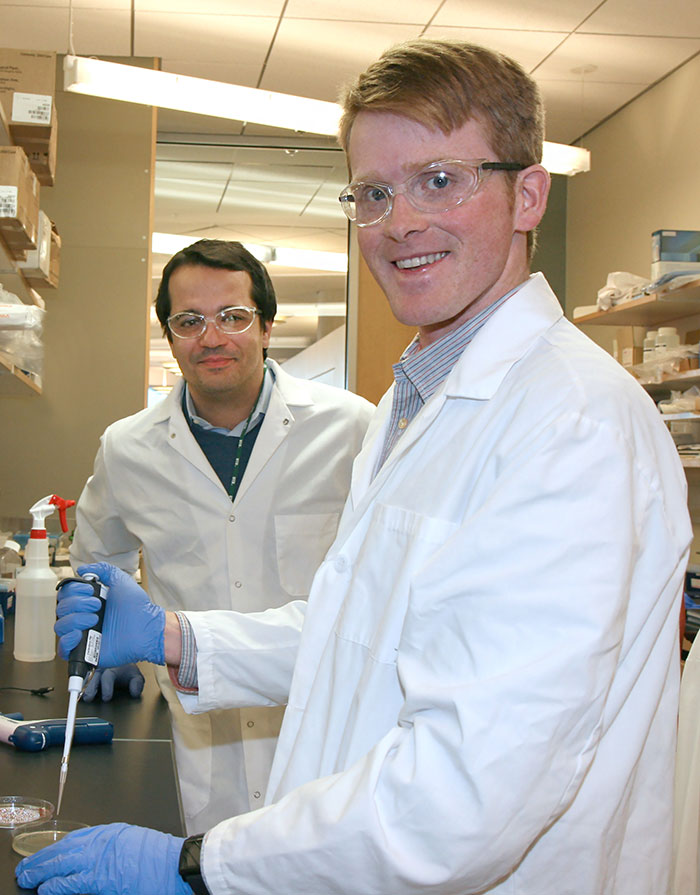 Bioengineers at The University of Texas at Dallas have created a novel gene-delivery system that shuttles a gene into a cell, but only for a temporary stay, providing a potential new gene-therapy strategy for treating disease.

The approach offers distinct advantages over other types of gene therapies under investigation, said Richard Taplin Moore MS’11, a doctoral student in bioengineering in the Erik Jonsson School of Engineering and Computer Science. He is lead author of a study describing the new technique in the Jan. 30 issue of the journal Nucleic Acids Research.

“In other gene therapy approaches, the therapeutic genetic messages being delivered can persist for a long time in the patient, potentially lasting for the patient’s entire lifetime,” Moore said. “This irreversibility is one reason gene therapies are so difficult to get approved.”

The UT Dallas study describes proof-of-concept experiments in which a gene carrying instructions for making a particular protein is ordered to self-destruct once the cell has “read” the instructions and made a certain quantity of the protein. In its experiments with isolated human kidney cells, the research team successfully delivered — and then destroyed — a test gene that makes a red fluorescent protein.

More research is needed to determine whether and how well the system might work in living organisms. But Moore said the ultimate goal is to refine the method to deliver genes that produce therapeutic proteins or drugs. The nature of the gene delivery system offers more control over how much protein the gene produces in cells or tissues. Because it does not alter the cell permanently, the method also sidesteps potential health problems that can occur if a gene is delivered to the wrong place in a cell’s genome.

“Our goal was to create a delivery system for therapeutic genes that would self-destruct, giving us more control over the delivered DNA by limiting the time it resides in cells.”

“Our goal was to create a delivery system for therapeutic genes that would self-destruct, giving us more control over the delivered DNA by limiting the time it resides in cells,” Moore said.

Located in the nucleus of each human cell, genes are made of DNA and contain instructions for making proteins. Machinery inside each cell “reads” the instructions and builds those proteins, which then carry out various functions needed to sustain life. Defective or mutated genes can result in malfunctioning or missing proteins, leading to disease.

Gene therapy aims to replace defective genes with healthy versions. Typically the good genes are packaged with a delivery mechanism called a vector, which transports the genetic material inside cells. With traditional approaches, once in the cell, the gene permanently integrates itself into the cell’s DNA.

Although promising, this type of gene therapy also has risks. If a therapeutic gene is inserted in the wrong place in the cell’s DNA, such as too close to a cancer-related gene, the process could activate additional disease-causing genes, resulting in lifelong health problems for the patient. While many gene therapy clinical trials are underway worldwide, the Food and Drug Administration has not approved for sale any human gene therapy product in the U.S.

The UT Dallas researchers approached the problem from the ground up, using synthetic biology. They combined genes from a cow, a sea anemone, bacteria and a virus that infects insects, and arranged the genes in a delivery vector. Each gene has a specific function in its native organism, but the new configuration allowed those functions to be put to new uses.
‘Mission Impossible’ Tactics

For example, one of the bacterial genes in the vector contains instructions for making a protein called Cas9, which can chop up and destroy other genes. In bacteria, Cas9 helps fight invading organisms; but in the synthetic vector, it was engineered to serve as a self-destruct mechanism, targeting the vector itself.

“When we first began, we referred to this project as Mission Impossible, both to reflect the initial difficulty in achieving our goal and to reflect the fate of messages in the Mission Impossible TV and movie franchise, where instructions to a team of secret agents promptly self-destruct after being read or heard,” said Dr. Leonidas Bleris, assistant professor of bioengineering at UT Dallas and senior author of the study.

“In our experiments, the cell’s machinery ‘reads’ the instructions in the vector, and from this makes the fluorescent protein, as well as the protein that destroys the vector itself.”

Bleris said the technique not only shows promise for delivering genes that produce therapeutic proteins, but also for protecting intellectual property.

“With this method, pharmaceutical companies might be able to deliver a therapeutic vector and then chop it up. It cannot then be recovered by someone else who might want to reverse engineer it,” Bleris said.

Moore credits a group of UT Dallas undergraduates for playing a key role in the success of the project: Alec Spinhirne, Michael Lai and Samantha Preisser are all co-authors of the study. The remaining co-authors are Dr. Yi Li, a postdoctoral researcher, and research assistant Taek Kang.

“I like to work with undergraduates in the lab who are a lot smarter than me,” Moore said. “They helped with computer simulations and mathematical modeling, and with cloning and data analysis. They’re very motivated, and their attitudes are positive — it’s contagious.”

Richard Taplin Moore MS’11 has completed nearly all the requirements to earn his doctorate in bioengineering from UT Dallas. But there’s one additional task he has taken on, and it has taken him all the way to Washington, D.C.

Moore was chosen for the Christine Mirzayan Science and Technology Policy Graduate Fellowship Program. The program provides early career individuals with the opportunity to spend 12 weeks at the National Academies in Washington, learning about science and technology policy, and the role that scientists and engineers play in advising the nation. Alumni of the program hold positions in congressional committees and at federal agencies.

Moore left in January and will return to campus in time for his May graduation. During his time in the Capitol, he is studying the policy aspects of technological developments and the importance of basic research in economic competitiveness.

The National Academies comprise experts in many disciplines who advise U.S. policymakers on numerous topics in science, technology and medicine. Before he left campus for the fellowship, Moore said he was most excited about meeting other fellows in his group as well as senior members of the National Academies.

“When I attend scientific conferences, I typically talk just with other scientists,” Moore said. “In this class, there are about 20 fellows from all over the world who come from different backgrounds, like economics, public policy, medicine and law.  We’ll be talking about everything from postdoctoral opportunities in the U.S., to aging and end-of-life care.”