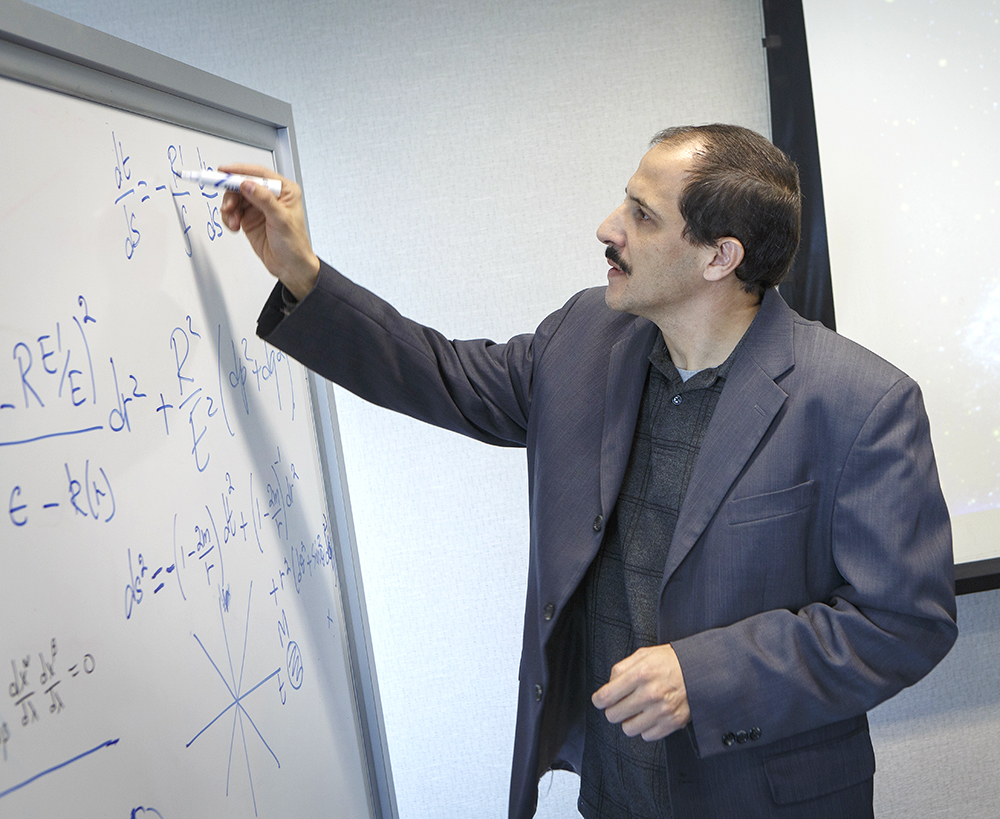 “Because we have eliminated one possibility, researchers can now focus on examining other possible theories as a cause of cosmic acceleration,” said Dr. Mustapha Ishak-Boushaki, an associate professor of physics.

Astrophysicists at The University of Texas at Dallas are helping to better define the nature of the cosmos by examining why the universe appears to be expanding at an accelerating pace.

In the last century, scientists developed the Big Bang model, which posits that the universe began when a single point containing all the matter in the universe exploded some 13.8 billion years ago. Since then, the universe has been expanding.

In 1998, researchers observed light from exploding stars called supernovas, and found that the universe is not expanding at a constant rate, nor is it slowing down, as would be expected from the force of gravity pulling all matter together. Instead, scientists found that the expansion is speeding up.

To explain this observed “cosmic acceleration,” astrophysicists have devised several competing theories. Thanks to UT Dallas research, one of those theories can now be crossed off the list.

“Because we have eliminated one possibility, researchers can now focus on examining other possible theories as a cause of cosmic acceleration,” said Dr. Mustapha Ishak-Boushaki, an associate professor of physics who recently published a scientific study. Two of his graduate students, Austin Peel and Dr. Michael Troxel, who recently earned his PhD, are co-authors of the paper, which was a highlighted study in the journal Physical Review Letters and was featured research on the American Physical Society website.

The theory the research refutes is related to the “lumpy” universe concept, which contends that the force of gravity between pieces of matter has created some areas in the universe of clumped matter and other areas that are practically void. If the lumpy universe theory were true, this clumping creates certain expectations about how quickly the different parts of the universe should expand.

But in his research, Ishak-Boushaki found the theory incompatible with observations of the rate at which groups of galaxies form clusters.

Ishak-Boushaki said the only way cosmic acceleration could take place in a lumpy universe is if there are other conditions present that would explain observations of the galaxy clusters. In particular, figuring a mathematical term called the “cosmological constant” into the theory’s calculations can explain the accelerated expansion in a lumpy universe. This term, more commonly known as “dark energy,” is a little understood feature of the universe that astrophysicists are exploring as one of the underlying causes of cosmic acceleration.

Without something else at work, Ishak-Boushaki said that his team’s calculations “have shown definitively” that the lumpy universe theory alone cannot account for cosmic acceleration.

Ishak-Boushaki said the next step in his research will be to work on the remaining possible theories for cosmic acceleration, including the possibility that the mathematical theories of gravity may be a bit off. But the work has broader applications as well.

“The questions surrounding cosmic acceleration are some of the most important issues in cosmology and physics because they relate to other fields of study,” he said. “The cosmological constant emerges in a unified theory of physics, and it touches research areas like quantum field theory. That’s why agencies such as NASA, the National Science Foundation and the Department of Energy are interested in these questions.”

Ishak-Boushaki’s research has been funded by NASA and the John Templeton Foundation.