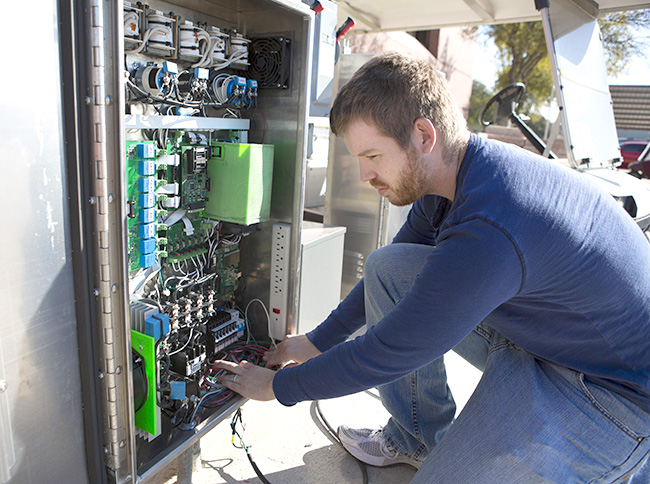 PhD student Matthew McDonough had been interested in new energy solutions even before starting the renewable project in the fall.

A promising display of carbon-free energy has been quietly humming along for three months on the UT Dallas campus.

Specialized solar-powered golf cart charging stations placed in January have withstood the elements and created a tantalizing example of the effectiveness of alternative energy sources.

“We have two charging stations, and each can service two carts so far,” said Matthew McDonough, a PhD student in the Renewable Energy and Vehicular Technology (REVT) lab at UT Dallas.

McDonough was assigned the project last fall, but his interest in creating alternative, carbon-free energy solutions began years ago when he was still an undergraduate.

“I really became interested in this field because of [conflicts] over natural resources,” McDonough said. “Creating ways to take advantage of renewable resources has the potential to solve so many problems.”

McDonough works with Dr. Babak Fahimi, professor of electrical engineering and director of the REVT lab. The idea was to create a project that could be implemented outside the lab. Electric charging stations for golf carts seemed a manageable place to start. 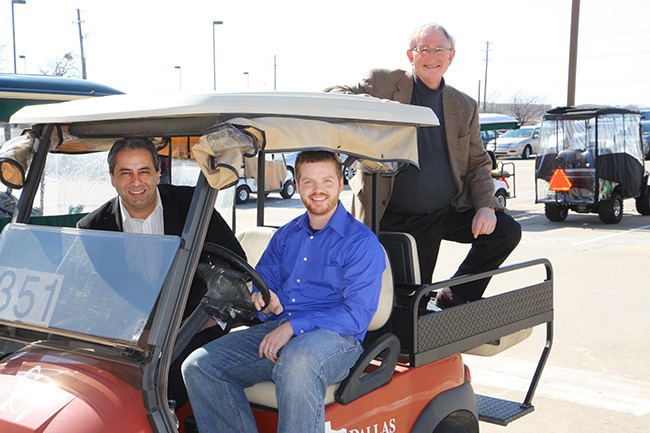 Matthew McDonough (center), a PhD student in the Renewable Energy and Vehicular Technology lab, prepares to operate a golf cart charged by solar energy at UT Dallas. With him are (left) Dr. Babak Fahimi, professor of electrical engineering, and Dr. Bob Helms, UT Dallas professor and former dean of the Erik Jonsson School of Engineering and Computer Science.

“We manufactured two prototypes for the specific purpose of this project,” Fahimi said. “The solar battery chargers were completely designed and developed by our students.”

McDonough added that the charging platform allows for combining and storing power from alternative sources.

“So we can store solar power in a battery that we can still use to charge the carts if we have cloudy days,” he said.

If the stored power is depleted, the system can get power from the traditional electric power grid as well. Each charging stations has an electronic box that converts solar power to charge the golf carts.

“The seamless and reliable operation – with no failure in the field – speaks to the high quality of our students’ engineering skills,” Fahimi said. “We plan to introduce additional wind and solar energy-harvesting units and develop green charging stations for electric and plug-in hybrid vehicles in the same parking area,” Fahimi said.

Future applications of this project could provide power for much larger projects. And the energy sources aren’t limited to solar power. McDonough says there could be several interconnected systems all gathering renewable energy from a variety of sources using the platform he helped create.