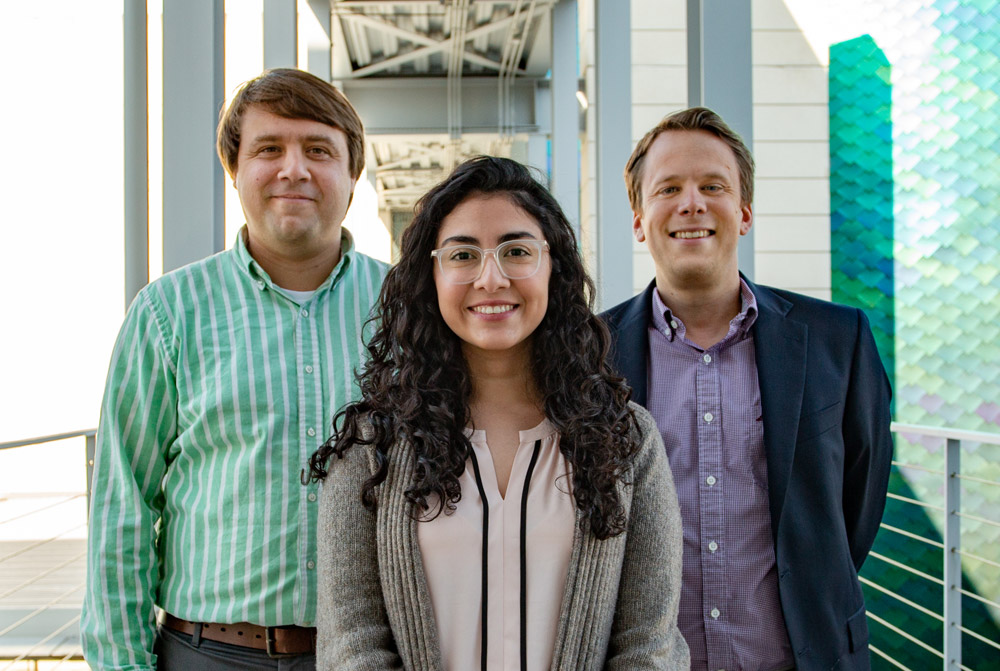 Combining the powers of the living and the inanimate, an interdisciplinary team from The University of Texas at Dallas has embedded genetically modified yeast into a synthetic gel to create a novel, shape-changing material designed to grow under specific biochemical or physical conditions.

“This is definitely a case where the product is more than the sum of its parts,” said Taylor Ware MS’11, PhD’13, assistant professor of bioengineering in the Erik Jonsson School of Engineering and Computer Science and corresponding author of a paper published in January in Science Advances, the American Association for the Advancement of Science’s open-access journal.

The idea to use the reproductive growth of cells to drive shape change within an inanimate container began with an old, reliable standby: baker’s yeast, or Saccharomyces cerevisiae.

This time-lapse video, shown at 10,800-times normal speed, shows the programmed shape change of a living composite when exposed to ultraviolet light. If you don’t see the video, watch it on Vimeo.

“Yeast was the first eukaryotic organism to have its genome totally sequenced,” Ware said. “Wonderful tools exist already to modify it genetically. The cells have stiff cell walls, unlike mammalian cells, which make them better for pushing outward on the gel to change its shape.”

By genetically modifying the yeast in different ways, the research team created composites that responded to various stimuli.

In proof-of-concept experiments, biomedical engineering doctoral student Laura Rivera Tarazona, lead author of the paper, incorporated plant DNA into yeast to give it light-responsive traits. When the resulting yeast-hydrogel composite was exposed to light, the entire object changed shape as the growing yeast pushed outward on the boundaries of the gel.

The research team also modified the yeast to respond to biochemical stimuli, including amino acids, which are building blocks of proteins.

“This combination of animate with inanimate lends itself to interacting with the body in a particularly useful way — using cellular mechanisms to drive shape change,” Ware said. “Given the flexibility of yeast, this composite could be designed to respond to any of countless conditions.”

Dr. Zachary Campbell, assistant professor of biological sciences in the School of Natural Sciences and Mathematics and a co-author of the study, said the “awesome power of yeast genetics” made the project possible.

The researchers believe the shape-changing response has potential applications as a type of “reporter” both inside and outside the body.

“Where I think this research eventually goes is indicating disease states via detection of proteins and other biomolecules,” Ware said.

Ware said shape change could also be used to perform mechanical work — to open a container or uncover an adhesive, for example.

“Our results are in the very early stage, but the fact that we’re taking a series of molecular events and transducing them into something mechanical is already exciting in itself,” Ware said. 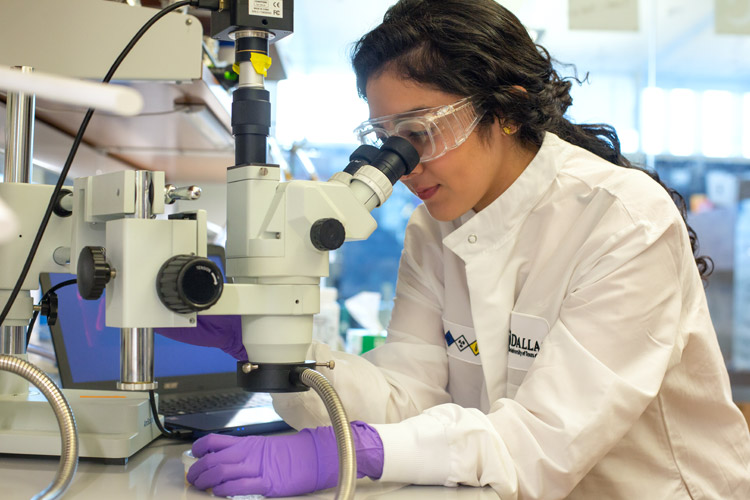 Laura Rivera Tarazona, working in the lab on Jan. 27, came to UT Dallas from La Universidad de Los Andes in Colombia to pursue her PhD.

Campbell added that, although the physical transformations in the composite materials are very slow, capitalizing on genetic manipulations to drive minuscule devices could have additional applications, such as releasing drugs from a capsule in response to a precise biological trigger.

“Theoretically, you could use these to detect anything you can detect in nature by combining an existing genetic circuit from another cell type with the yeast,” he said. “This allows access to a dazzling array of physiological cues.

“There’s a beauty to taking something that’s ordinarily so static and endowing it with this capability to transform into other things.”