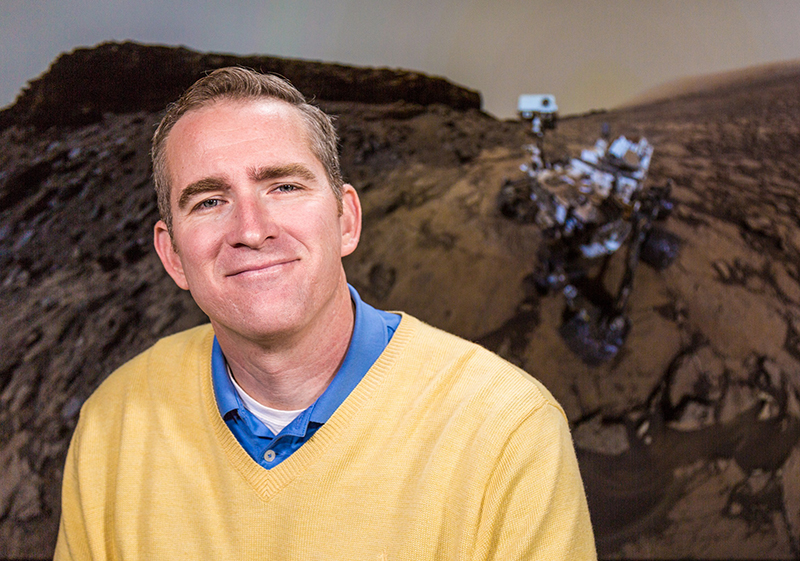 By seeing which way the wind blows, a University of Texas at Dallas fluid dynamics expert has helped propose a solution to a Martian mountain mystery.

Dr. William Anderson, an assistant professor of mechanical engineering in the Erik Jonsson School of Engineering and Computer Science, co-authored a paper published in the journal Physical Review E that explains the common Martian phenomenon of a mountain positioned downwind from the center of an ancient meteorite impact zone.

Anderson’s co-author, Dr. Mackenzie Day, worked on the project as part of her doctoral research at The University of Texas at Austin, where she earned her PhD in geology in May 2017. Day is a postdoctoral scholar at the University of Washington in Seattle.

Gale Crater was formed by meteorite impact early in the history of Mars, and it was subsequently filled with sediments transported by flowing water. This filling preceded massive climate change on the planet, which introduced the arid, dusty conditions that have been prevalent for the past 3.5 billion years. This chronology indicates wind must have played a role in sculpting the mountain.

“On Mars, wind has been the only driver of landscape change for over 3 billion years,” Anderson said. “This makes Mars an ideal planetary laboratory for aeolian morphodynamics — wind-driven movement of sediment and dust. We’re studying how Mars’ swirling atmosphere sculpted its surface.”

Wind vortices blowing across the crater slowly formed a radial moat in the sediment, eventually leaving only the off-center Mount Sharp, a 3-mile-high peak similar in height to the rim of the crater. The mountain was skewed to one side of the crater because the wind excavated one side faster than the other, the research suggests.

Day and Anderson first advanced the concept in an initial publication on the topic in Geophysical Research Letters. Now, they have shown via computer simulation that, given more than a billion years, Martian winds were capable of digging up tens of thousands of cubic kilometers of sediment from the crater — largely thanks to turbulence, the swirling motion within the wind stream. 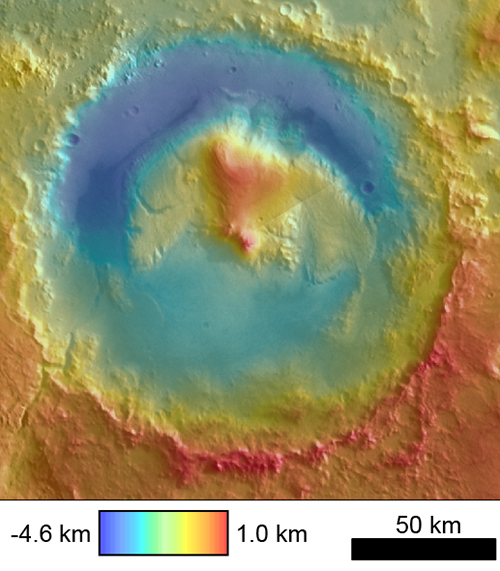 The location — and mid-latitude Martian craters in general — became of interest as NASA’s Curiosity rover landed in Gale Crater in 2012, where it has gathered data since then.

“The rover is digging and cataloging data housed within Mount Sharp,” Anderson said. “The basic science question of what causes these mounds has long existed, and the mechanism we simulated has been hypothesized. It was through high-fidelity simulations and careful assessment of the swirling eddies that we could demonstrate efficacy of this model.”

The theory Anderson and Day tested via computer simulations involves counter-rotating vortices — picture in your mind horizontal dust devils — spiraling around the crater to dig up sediment that had filled the crater in a warmer era, when water flowed on Mars.

“These helical spirals are driven by winds in the crater, and, we think, were foremost in churning away at the dry Martian landscape and gradually scooping sediment from within the craters, leaving behind these off-center mounds,” Anderson said.

That simulations have demonstrated that wind erosion could explain these geographical features offers insight into Mars’ distant past, as well as context for the samples collected by Curiosity.

“It’s further indication that turbulent winds in the atmosphere could have excavated sediment from the craters,” Anderson said. “The results also provide guidance on how long different surface samples have been exposed to Mars’ thin, dry atmosphere.”

This understanding of the long-term power of wind can be applied to Earth as well, although there are more variables on our home planet than Mars, Anderson said.

“Swirling, gusty winds in Earth’s atmosphere affect problems at the nexus of landscape degradation, food security and epidemiological factors affecting human health,” Anderson said. “On Earth, however, landscape changes are also driven by water and plate tectonics, which are now absent on Mars. These drivers of landscape change generally dwarf the influence of air on Earth.”

Computational resources for the study were provided by the Texas Advanced Computing Center at UT Austin. Day’s role in the research was supported by a Graduate Research Fellowship from the National Science Foundation.