Scientists Use Light To ‘Tag and Track’ Genetic Processes 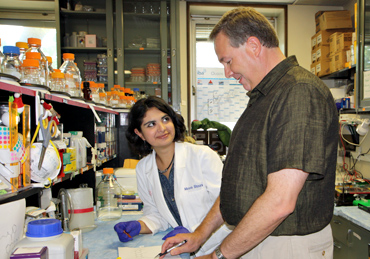 Dr. Stephen Levene and doctoral student Massa Shoura have devised a way to track the formation of DNA loops.

In a new study, UT Dallas researchers outline how they used fluorescent molecules to “tag” DNA and monitor a process called DNA looping, a natural biological mechanism involved in rearranging genetic material in some types of cells.

The UT Dallas “tag and track” method not only sheds light on how DNA loops form, but also might be adapted to screen drugs for effectiveness against certain viruses that shuffle genetic material, such as  HIV.

Until now, scientists primarily had “snapshots” of the initial and final stages of DNA loop formation, with only limited information about what happens during the intermediate steps, said Dr. Stephen Levene, professor of bioengineering, molecular and cell biology, and physics at UT Dallas. He is senior author of the study, published online and in an upcoming issue of the journal Nucleic Acids Research.

“Scientists have known for more than 30 years that DNA looping is an important part of molecular biology and gene regulation, but until our work, there have been few serious attempts to understand the basic biophysics of the process,” Levene said. 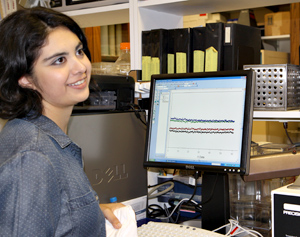 Massa Shoura was lead author of the paper published in the journal Nucleic Acids Research.

DNA looping is a mechanism common in many instances of natural gene-splicing. Proteins within cells – or proteins made by invading viruses – latch onto specific docking points on a DNA molecule. They bring those points together to form a loop, and then snip out the genetic material between the points while reconnecting the now-loose ends.

DNA loop formation is especially important in organisms whose genetic material is circular, including some bacteria and viruses. Human DNA is linear, but the possibility that DNA looping takes place in human cells is an ongoing area of investigation, Levene said.

Levene and UT Dallas doctoral student Massa Shoura, the lead author of the paper, used a protein called Cre in their experiments. Cre is made by a virus that infects bacteria and is so good at forming DNA loops and excising genetic material that scientists routinely use it to delete genes from laboratory animals, which are then used to study the role of genes in human disease.

Levene and Shoura engineered isolated segments of DNA to contain Cre’s docking points. They also inserted into those points a molecule that fluoresces when exposed to certain wavelengths of light. By monitoring the changes in fluorescence, the researchers could watch the steps of the loop formation.

“We estimate that using fluorescence-based methods such as this for drug screening could be as much as 10,000 times more efficient than methods that are currently used.”

The information the researchers have gleaned is not only useful for understanding basic biology and genetics, but also might lead to more efficient methods for screening potential new drugs for anti-HIV activity.

Once inside a host cell, HIV produces an enzyme similar to Cre, called an integrase. As its name suggests, the integrase slices into the host’s DNA and inserts HIV’s genetic material.

“Our fluorescent-tag technique could be used in the lab to more closely examine how HIV inserts itself into the host’s genome,” Shoura said. “By labeling and monitoring the process, we also could test drugs designed to interfere with the integrase.”

“We estimate that using fluorescence-based methods such as this for drug screening could be as much as 10,000 times more efficient than methods that are currently used,” Levene said.

Other UT Dallas researchers from the Department of Molecular and Cell Biology who participated in the study were senior scientist Dr. Alexandre Vetcher; doctoral students Stefan Giovan, Farah Bardai and Anusha Bharadwaj; and former undergraduate student Matthew Kesinger. The National Institutes of Health and the National Science Foundation funded the research.