UT Dallas scientists have constructed novel fibers by wrapping sheets of tiny carbon nanotubes to form a sheath around a long rubber core. This illustration shows complex two-dimensional buckling, shown in yellow, of the carbon nanotube sheath/rubber-core fiber. The buckling results in a conductive fiber with super elasticity and novel electronic properties.

An international research team based at The University of Texas at Dallas has made electrically conducting fibers that can be reversibly stretched to over 14 times their initial length and whose electrical conductivity increases 200-fold when stretched.

The research team is using the new fibers to make artificial muscles, as well as capacitors whose energy storage capacity increases about tenfold when the fibers are stretched. Fibers and cables derived from the invention might one day be used as interconnects for super-elastic electronic circuits; robots and exoskeletons having great reach; morphing aircraft; giant-range strain sensors; failure-free pacemaker leads; and super-stretchy charger cords for electronic devices.

In a study published in the July 24 issue of the journal Science, the scientists describe how they constructed the fibers by wrapping lighter-than-air, electrically conductive sheets of tiny carbon nanotubes to form a jelly-roll-like sheath around a long rubber core.

The new fibers differ from conventional materials in several ways. For example, when conventional fibers are stretched, the resulting increase in length and decrease in cross-sectional area restricts the flow of electrons through the material. But even a “giant” stretch of the new conducting sheath-core fibers causes little change in their electrical resistance, said Dr. Ray Baughman, senior author of the paper and director of the Alan G. MacDiarmid NanoTech Institute at UT Dallas.

One key to the performance of the new conducting elastic fibers is the introduction of buckling into the carbon nanotube sheets. Because the rubber core is stretched along its length as the sheets are being wrapped around it, when the wrapped rubber relaxes, the carbon nanofibers form a complex buckled structure, which allows for repeated stretching of the fiber.

“Think of the buckling that occurs when an accordion is compressed, which makes the inelastic material of the accordion stretchable,” said Baughman, the Robert A. Welch Distinguished Chair in Chemistry at UT Dallas. 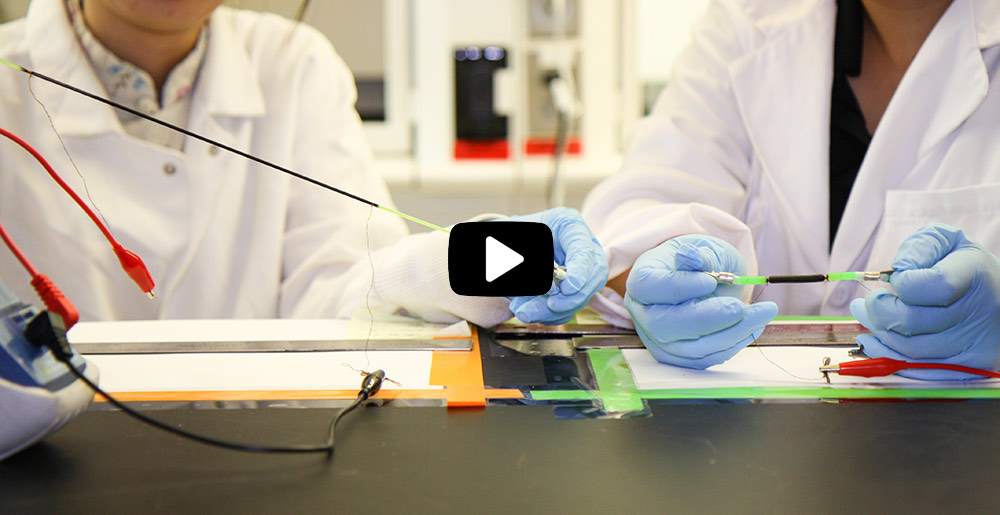 In this video, two lab demonstrations show the near invariance of resistance during the stretching of carbon-nanotube-sheathed rubber fibers.

“We make the inelastic carbon nanotube sheaths of our sheath-core fibers super stretchable by modulating large buckles with small buckles, so that the elongation of both buckle types can contribute to elasticity. These amazing fibers maintain the same electrical resistance, even when stretched by giant amounts, because electrons can travel over such a hierarchically buckled sheath as easily as they can traverse a straight sheath.”

Dr. Zunfeng Liu, lead author of the study and a research associate in the NanoTech Institute, said the structure of the sheath-core fibers “has further interesting and important complexity.” Buckles form not only along the fiber’s length, but also around its circumference.

“Shrinking the fiber’s circumference during fiber stretch causes this second type of reversible hierarchical buckling around its circumference, even as the buckling in the fiber direction temporarily disappears,” Liu said. “This novel combination of buckling in two dimensions avoids misalignment of nanotube and rubber core directions, enabling the electrical resistance of the sheath-core fiber to be insensitive to stretch.”

By adding a thin overcoat of rubber to the sheath-core fibers and then another carbon nanotube sheath, the researchers made strain sensors and artificial muscles in which the buckled nanotube sheaths serve as electrodes and the thin rubber layer is a dielectric, resulting in a fiber capacitor. These fiber capacitors exhibited a capacitance change of 860 percent when the fiber was stretched 950 percent.

Adding twist to these double-sheath fibers resulted in fast, electrically powered torsional — or rotating — artificial muscles that could be used to rotate mirrors in optical circuits or pump liquids in miniature devices used for chemical analysis, said Dr. Carter Haines BS’11 PhD’15, a research associate in the NanoTech Institute and an author of the paper. 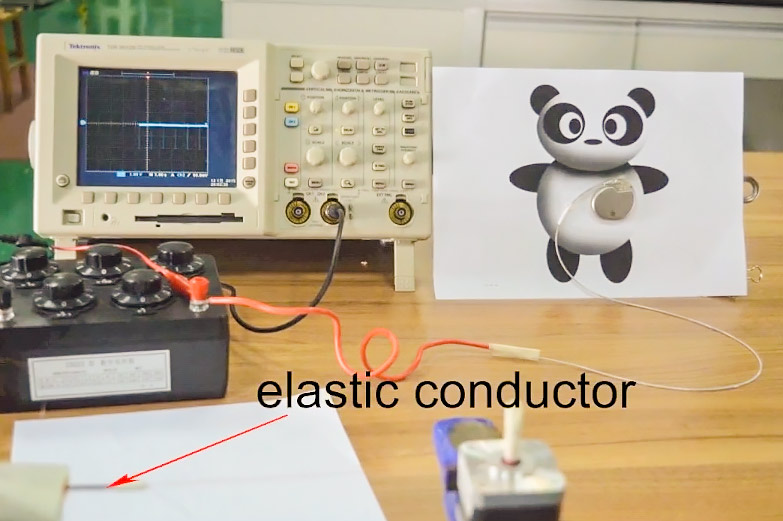 Scientists tested whether a carbon-nanotube-sheathed rubber fiber could be used as a conductive wire in a pacemaker cable. Watch the video in which an oscilloscope recording shows that the voltage pulses from the pacemaker are not affected by even extreme fiber twisting, stretching and bending.

In the laboratory, Nan Jiang, a research associate in the NanoTech Institute, demonstrated that the conducting elastomers can be fabricated in diameters ranging from the very small — about 150 microns, or twice the width of a human hair — to much larger sizes, depending on the size of the rubber core. “Individual small fibers also can be combined into large bundles and plied together like yarn or rope,” she said.

“This technology could be well-suited for rapid commercialization,” said Dr. Raquel Ovalle-Robles MS’06 PhD’08, an author on the paper and chief research and intellectual properties strategist at Lintec of America’s Nano-Science & Technology Center.

“The rubber cores used for these sheath-core fibers are inexpensive and readily available,” she said. “The only exotic component is the carbon nanotube aerogel sheet used for the fiber sheath.”

The Science research was supported by the Air Force Office of Scientific Research, the Robert A. Welch Foundation, the U.S. Army, the National Institutes of Health, the National Science Foundation and the Office of Naval Research. Several funding sources from China and Brazil also contributed.