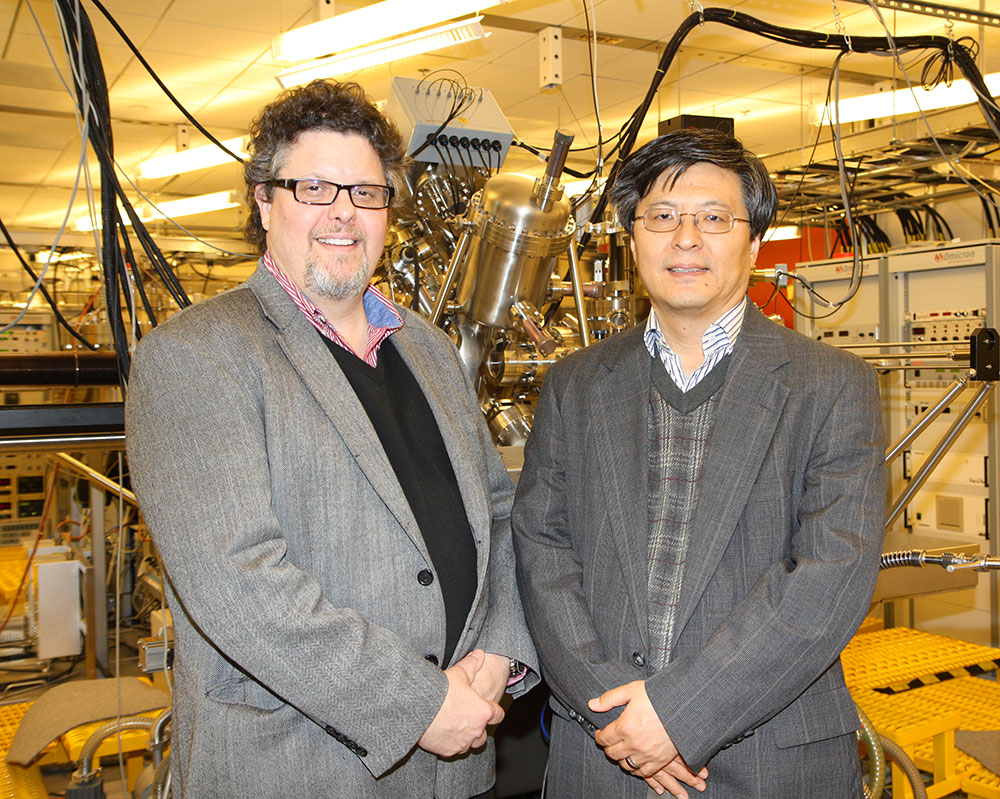 Drs. Robert Wallace and Kyeongjae “K.J.” Cho were among a team of international collaborators on research recently published in the journal Science.

A recent article in the journal Science details how researchers from the Erik Jonsson School of Engineering and Computer Science devised a simple process that dramatically increases light generation from certain atomic-sized materials.

The findings could have a broad impact in the advancement of LED displays, high efficiency solar cells, photo detectors, and nano-electronic circuits and devices.

“The prospect of using atomically thin materials for electronic applications that can detect and control light emission, what is known as optoelectronics, has captured the imagination of scientists and researchers across the world,” said co-author Dr. Robert Wallace, professor of materials science and engineering, and Erik Jonsson Distinguished Chair.

Alongside a team of international collaborators, the UT Dallas scientists focused their research on a class of materials called transition metal dichalcogenides (TMDs), which can form an atomically thin layer that behaves like a semiconductor switch. For optoelectronic applications, a big hurdle to further development of TMD-based devices has been the low efficiency of their light generation.

The article in Science shows how the efficiency of light generation in a particular TMD, molybdenum disulfide, can be improved by more than 100 times.

“Typically, this efficiency is captured in a benchmark measurement called ‘quantum yield,’” Wallace said. “Quantum yields are typically less than 1 percent for these atomically thin layered materials, making useful optoelectronic devices impractical. The low yield is thought to originate from imperfections in the TMD layer that results in mediocre electronic quality.”

“The prospect of using atomically thin materials for electronic applications that can detect and control light emission, what is known as optoelectronics, has captured the imagination of scientists and researchers across the world.”

Despite the typical low yield percentages, the researchers found that a relatively simple wet chemical treatment improves the performance of molybdenum disulfide, resulting in quantum yield of around 95 percent.

Collaborators at the University of California, Berkeley, led by Dr. Ali Javey, originally observed the extremely enhanced quantum yields upon exposure to the chemical treatment, which involves the use of an air-stable, solution-based organic superacid.

“The improvement observed was intriguing and we were eager to better understand how the treatment improves the efficiency,” Wallace said.

As the chemical treatment is straightforward and easy to adopt, it is expected to significantly impact a wide range of TMD materials and device research and development.

Dr. Kyeongjae “K.J.” Cho, professor of materials science and engineering, said that as computer chips and other components become smaller, that the need for efficient nano-electronic circuits and devices becomes greater.

“In addition to improved optoelectronic devices, such as photodetectors and light-emitting diodes, this discovery will impact performance in other components like transistors,” Cho said.

“The modeling and characterization study at UT Dallas provides key insights on the underlying mechanisms leading to the improvement in the efficiency,” Cho said.

Earlier in this semester, Wallace also was involved in a study that showed TMDs exhibited a quantum mechanical behavior called negative differential resistance, or NDR, at room temperature when grown as a layered structure. NDR is a phenomenon in which electrons, due to their wave nature, tunnel through thin materials with varying resistance.