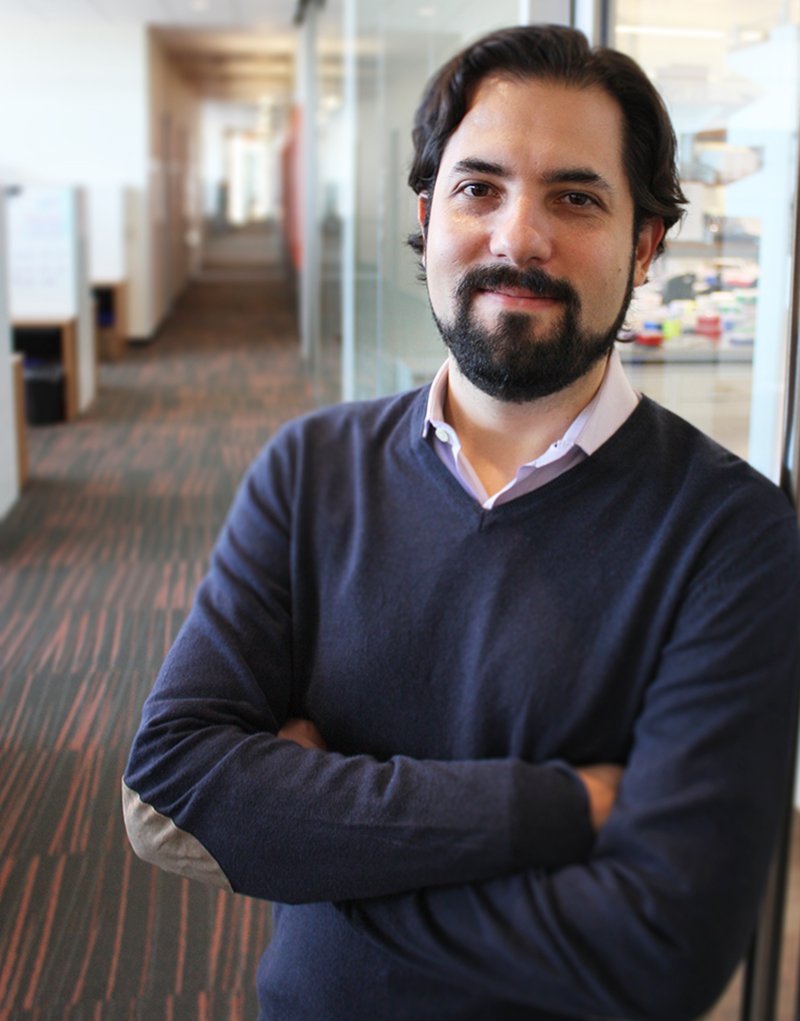 According to new research, the key to a successful, long-term relationship is for each partner to adapt to the other’s changes over time.

At least, that’s what appears to be true for pairs of proteins in bacteria.

A University of Texas at Dallas scientist and his colleagues are developing computer models to predict how mutations — or tiny physical changes — affect the biological performance of pairs of proteins that have co-evolved to work together.

The research, published in a recent issue of the journal Molecular Biology and Evolution, has potential applications in synthetic biology and protein engineering, fields that are aimed at designing new proteins or exploiting existing ones to improve human health.

Proteins, which carry out most of life’s functions, are made up of sequences of molecules called amino acids. Pairs of proteins successfully communicate with one another by physically interacting at specific points on the amino acid chain.

Such pairs of proteins tend to co-evolve over time: If one acquires a mutation in a key amino acid, the other tends to adapt to maintain the balance. However, some mutations can end the relationship.

“If a mutation changes one of those key amino acids at the interface, the pair may no longer be able to communicate, and the function could be lost,” said Dr. Faruck Morcos, assistant professor of biological sciences at UT Dallas and senior author of the article. “The result could adversely affect that organism’s survival.”

Morcos and his colleagues at Rice University developed a computational model that evaluates every possible combination of mutations at the interface among the amino acid sequences in a pair of proteins found in the bacterium Escherichia coli. The computational model finds combinations that result in couples who continue to communicate and those for whom the connection is gone.

“If a mutation changes one of those key amino acids at the interface, the pair may no longer be able to communicate, and the function could be lost. The result could adversely affect that organism’s survival.”

Dr. Faruck Morcos,
assistant professor
of biological sciences
in the School of Natural
Sciences and Mathematics

The bacteria proteins served as a test case, but Morcos said the approach can be applied to proteins in other organisms as well, including human proteins.

“This is a mathematical model that we can use to predict how changes in amino acid sequences affect proteins’ function,” Morcos said.

A research group at MIT had previously carried out experiments in the lab to examine every one of the 160,000 possible combinations in this particular protein pair.

“That effort was amazing. It determined experimentally what the effect was for all of these mutations,” Morcos said. “But it was very expensive. We used their results to validate that our model is able to predict not only which mutations will not be able to interact, but also mutations that maintain their intended function.”

The computational model also is able to rank the confidence level of the working combinations.  Of the 1,600 combinations found to be functional, the model was very confident in the top 100, for example.

“If we can predict something that should work, but is not obvious, we can point experimentalists to try specific mutations, saving time and expense, as opposed to the trial-and-error approach,” Morcos said.

Using its model, the research group found something unexpected as well.

“We predicted combinations that should have been functional, but actually weren’t in the experimental data,” Morcos said. “It turns out that some mutations resulted in pairs that could indeed communicate with their target, but they also interacted with other proteins as well. We think that the relationship wasn’t functioning at its full potential because one of the pair became too promiscuous with other proteins.”

That result showed that the model could be useful in investigating the effect of mutations not only on communication between partner proteins, but also with other proteins in a cell.

“For scientists who are doing experiments, it can be difficult to assess the effects on the rest of the proteins in a network of proteins,” Morcos said. “It’s relatively easy with this computational work.”

In a subsequent study, published recently in the Proceedings of the National Academy of Sciences, Morcos and his colleagues at Rice and the Chinese Academy of Sciences used their computational approach to determine the most important physical points at which a pair of proteins interacts.

“This is an important result,” Morcos said. “If you know where the ‘hot spots’ are, the most important point at a protein-protein interface, this could aid in the design of therapeutic drugs to intervene at that point.”

The research has been funded in part by UT Dallas startup funds and grants to Rice University from the National Science Foundation and the Cancer Prevention and Research Institute of Texas.