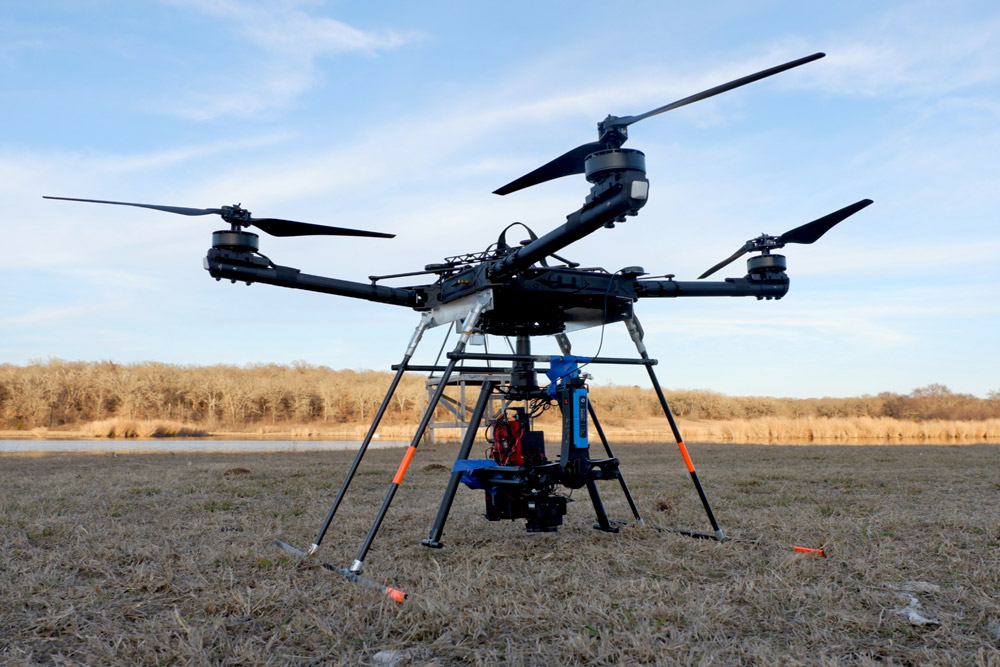 Aerial robots developed by UT Dallas researchers can carry several cameras, an array of onboard sensors and a downwelling irradiance spectrometer — all used to gather data for mapping and to learn the characteristics of environments. (Photos by Lakitha Wijeratne/UT Dallas physics doctoral student)

A University of Texas at Dallas research group has developed an autonomous robotic team of devices that can be used at hazardous or difficult-to-reach sites to make surveys and collect data — providing more and faster insights than human beings are able to deliver.

Dr. David Lary, professor of physics in the School of Natural Sciences and Mathematics, said his group’s robot teams — composed of autonomous devices that gather data on the ground, in the air and in water — would be ideally suited for hazardous environmental situations and/or for holistic environmental surveys of ecosystems.

“An autonomous team like this could do a survey and rapidly sample what’s in the air and the water so that people could be kept out of harm’s way,” Lary said. “In another context, the robots could provide a general survey of ecosystems, or they could look at situations such as harmful algal blooms in lakes.”

Lary said the autonomous robotic teams are also useful for real-time decision support in areas such as agriculture and infrastructure inspection. 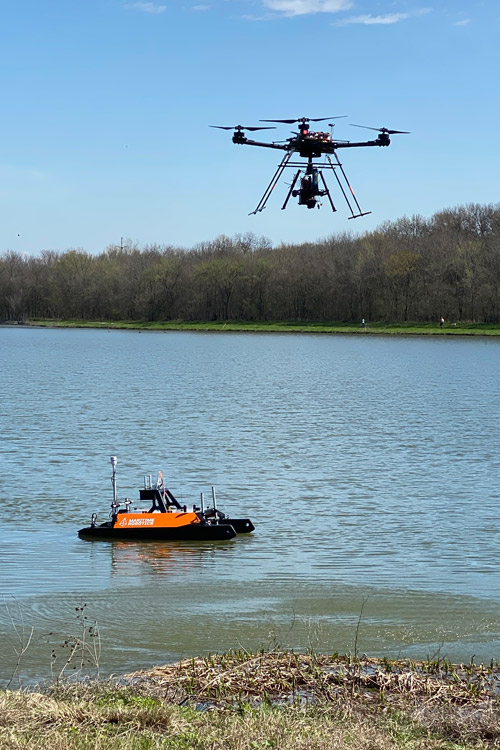 Researchers at UT Dallas have developed an autonomous team of robotic devices that can be used at hazardous or difficult-to-reach sites. Working together, the robots can make surveys and collect thousands of data records in just a few minutes.

A recent demonstration in the field showed how the autonomous robotic team can rapidly learn the characteristics of environments it has never seen before. Lary and his colleagues deployed the robots in a test run in Plano, Texas, to demonstrate their data-gathering capabilities. He said he hopes the robot team prototype can be a model for changing the methods that are used to survey disaster sites, waterways and extreme environments.

The multirobot, multisensor team can include various combinations of devices, such as a robot boat that carries sensors to measure water composition, as well as sonar to track objects below the surface and to provide aquatic remote sensing. At the same time, an overflying aerial robot collects hyperspectral images, providing an entire spectrum for every pixel in the image. Using the remotely sensed information, the devices — through machine learning — can rapidly construct wide area maps of the environmental state.

“Not only do we get depth information, we also can measure the height of any vegetation that’s in the water. We can determine what is at the base of a pool, pond or estuary and the kinds of fish in the vicinity. With the sonar we can count and size the individual fish and get the total biomass in a vertical profile,” Lary said.

In addition to the boat, the robot team includes an unmanned aerial drone that carries several cameras, an array of onboard sensors and a downwelling irradiance spectrometer, which gathers data about the radiation directed toward the Earth from the sun or the atmosphere. In addition, a ground vehicle can collect soil samples and utilize ground-penetrating radar. Satellite data can be added to the team to provide photos and measurements from space. 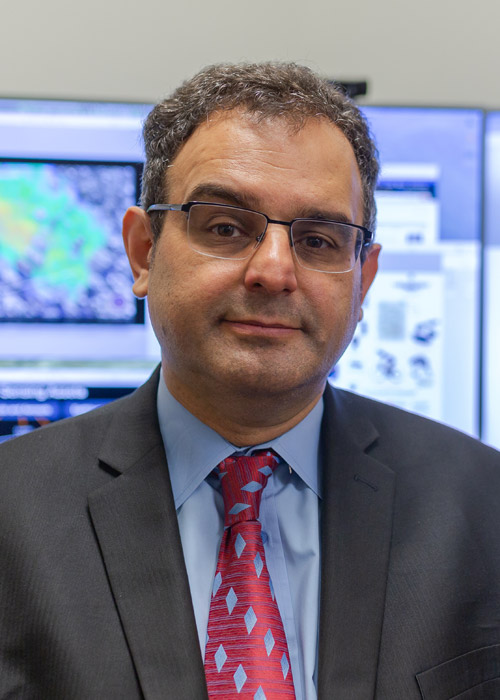 “An autonomous team like this could do a survey and rapidly sample what’s in the air and the water so that people could be kept out of harm’s way. In another context, the robots could provide a general survey of ecosystems, or they could look at situations such as harmful algal blooms in lakes.”

Dr. David Lary, professor of physics in the School of Natural Sciences and Mathematics

Besides allowing access to areas that are typically inaccessible to or dangerous for humans, the robot team approach significantly enhances the amount of data that can be collected.

“In just a few minutes we can collect many thousands of data records,” Lary said. “So, if you were to deploy a robot team multiple times over several locations in a period of about a month, you could get hundreds of thousands — even millions — of records. It’s the rapid acquisition of relevant data that can help keep people out of harm’s way, which is the point.”

In addition to gathering large amounts of correlated data rapidly, another way that the robot team is improving the survey process is the ease by which software updates are provided to the machines.

“Just like Tesla vehicles, they simply receive over-the-air updates that enhance their capabilities. It works well for Tesla, and we envision the same thing for our robotic team,” he said.

Lary said the robot team is just one aspect of his research, which is focused on developing comprehensive, turnkey sensing systems that connect with back-end data systems to turn streams of information into actionable insights.

“The single driving goal of everything I do is preemptive human protection. It’s trying to keep people out of harm’s way and to have a suite of sentinels that can give us real-time information,” he said. “I want this capability to be available to municipalities, health departments, corporations and individuals, through an extensible store where, like Lego blocks, you can get the individual sensing systems that can help with disaster response or just routine planning.”

The research was funded in part by the Texas National Security Network Excellence Fund award for Environmental Sensing Security Sentinels and the SOFWERX award for Machine Learning.

Lary’s research was assisted by the Texas Research and Education Cyberinfrastructure Services center, led by Dr. Christopher Simmons, director in the Office of Information Technology. Supported by a grant from the National Science Foundation, the center provides computing support for various research projects at UT Dallas and other UT System schools.