This earlier version of the Robojelly runs on electricity. Scientists, led by researchers at UT Dallas and Virginia Tech, have created a new version that feeds on hydrogen and oxygen in water. 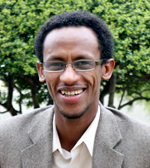 Researchers at The University of Texas at Dallas and Virginia Tech have created an undersea vehicle inspired by the common jellyfish that runs on renewable energy and could be used in ocean rescue and surveillance missions.

In a study published this week in Smart Materials and Structures, scientists created a robotic jellyfish, dubbed Robojelly, that feeds off hydrogen and oxygen gases found in water.

“We’ve created an underwater robot that doesn’t need batteries or electricity,” said Dr. Yonas Tadesse, assistant professor of mechanical engineering at UT Dallas and lead author of the study. “The only waste released as it travels is more water.” 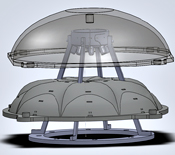 The Robojelly, shown here out of water, has an outer structure made out of silicone.

Engineers and scientists have increasingly turned to nature for inspiration when creating new technologies. The simple yet powerful movement of the moon jellyfish made it an appealing animal to simulate.

The Robojelly consists of two bell-like structures made of silicone that fold like an umbrella. Connecting the umbrella are muscles that contract to move.

In this study, researchers upgraded the original, battery-powered Robojelly to be self-powered. They did that through a combination of high-tech materials, including artificial muscles that contract when heated.

These muscles are made of a nickel-titanium alloy wrapped in carbon nanotubes, coated with platinum and housed in a pipe. As the mixture of hydrogen and oxygen encounters the platinum, heat and water vapor are created. That heat causes a contraction that moves the muscles of the device, pumping out the water and starting the cycle again.

“It could stay underwater and refuel itself while it is performing surveillance,” Tadesse said.

In addition to military surveillance, Tadesse said, the device could be used to detect pollutants in water.

Tadesse said the next step would be refining the legs of the devices to move independently, allowing the Robojelly to travel in more than one direction.

Dr. Ray Baughman, the Robert A. Welch Distinguished Chair in Chemistry and director of the Alan G. MacDiarmid NanoTech Institute at UT Dallas, was an author of the study. The research was a collaboration between researchers at the University of Texas at Dallas and Virginia Polytechnic Institute and State University, Virginia Tech, including Dr. Shashank Priya, the study’s senior author.

The study was funded by the Office of Naval Research.