Two teams of researchers from The University of Texas at Dallas have been chosen to help a $194 million national network create the technologies of the next generation.

One UT Dallas team will evaluate materials to replace silicon in integrated circuits, with the goal of creating faster electronics that use dramatically less power.  The other team will help design a computer architecture that allows the many types of computers used in everyday life to seamlessly communicate with one another, making it possible to build systems to avoid traffic accidents or to lock down an area in the case of an emergency. 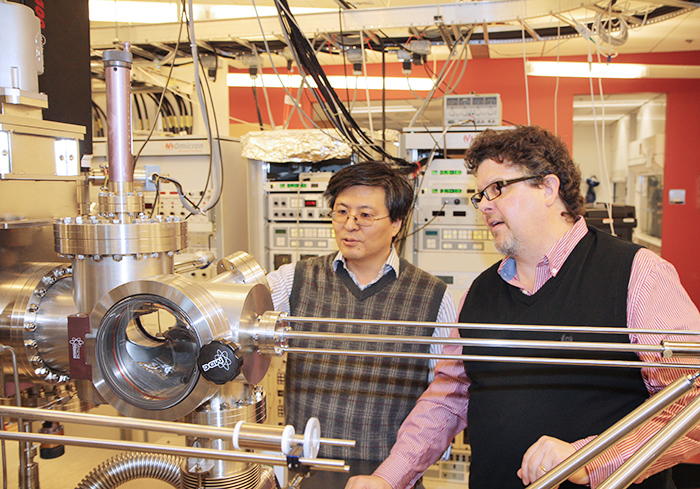 Dr. Kyeongjae “K.J.” Cho (left) and Dr. Robert “Bob” Wallace are working on a project to find a replacement for silicon in integrated circuits.

“The top programs in the nation want to partner with us in two different areas of technology to help our country continue to lead in microelectronics,” said Dr. Mark W. Spong, dean of the Jonsson School. “Our researchers are on par with top-tier research universities, and our participation shows that other academicians recognize this and seek us out.”

As the physical limits of integrated circuits – currently made of silicon transistors – are reached, LEAST researchers are looking to replace conventional 3-D silicon with nanoscale substances that increase the speed of computing done in electronics while also using less energy. Integrated circuits are used in nearly all modern electronics, such as computers, cellphones and tablets. 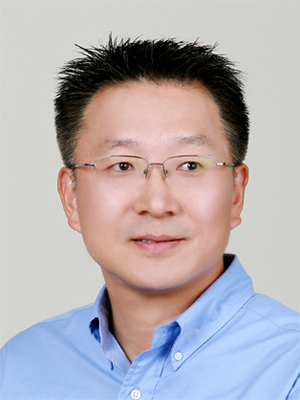 The UT Dallas LEAST team, which will receive about $3.4 million over five years, will explore a 2-D class of materials known as dichalcogenides, which are atomically thin but allow electrical current to be controlled as it moves through the material.

“The key for future transistor applications will be combining these 2-D materials with other types of materials such as insulators and metals used in integrated circuits to find the most powerful and efficient combination,” Wallace said.

The UT Dallas team is conducting research on the interfaces of these materials.

“The ability to control the surfaces and interfaces in these types of material systems is the most important aspect of future device operations,” Wallace said.

Besides conducting research in LEAST, Wallace, holder of the Erik Jonsson Distinguished Chair, is also a center coordinator. His previous discovery that hafnium silicates and oxides could be used in transistors to enable smaller nanoscale devices revolutionized the computer industry. Hafnium-based transistors are now used in processor chips in desktop and laptop computers, iPads and cellphones.

Cho is an expert in multiscale computer modeling related to new materials, and Kim is an expert in nanoscale electron microscopy – advanced techniques that allow atom-to-atom modeling and chemical mapping of materials. The team will use this expertise in the surface and interface studies.

The world-class facilities housed in the $85 million Natural Science and Engineering Research Laboratory (NSERL) are an important factor in what enabled the UT Dallas team to be part of LEAST, Wallace said.

“UT Dallas has the state-of-the art equipment needed to contribute to LEAST and determine which materials will be used for the next generation of electronics,” he said. 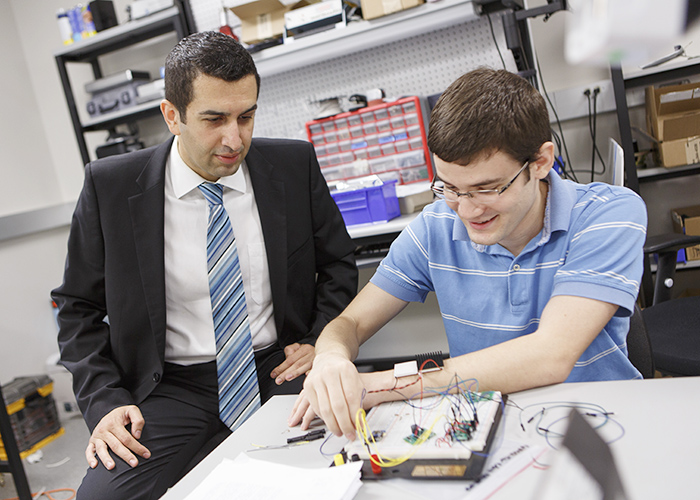 Dr. Roozbeh Jafari working with a student in his lab on health-related sensors in his Embedded Systems and Signal Processing Lab.

The other UT Dallas team is developing technology as part of STARnet’s TerraSwarm Research Center.

Sensors and computers can be found in nearly all aspects of modern life, from pacemakers to air conditioners to sensors in vehicles that can tell when a driver is distracted. TerraSwarm researchers are working toward shared data collected from the millions of individual smart sensors and other types of computers used in energy, health, environmental and personal applications.

The potential of sensor-based systems in monitoring applications goes far beyond what has been accomplished so far, Jafari said. When realized in full, these technologies can seamlessly integrate the cyber world, centered today in the cloud, with the physical/biological world, effectively blurring the gap between the two. The emerging global cyber-physical network is called the TerraSwarm, meaning that it encompasses many billions of sensors and actuators deployed across the earth.

“The possibilities of this type of shared sensing platform will revolutionize society,” said Jafari, lead investigator for the UT Dallas TerraSwarm team, which will receive more than $900,000 over five years. “A fully integrated cyber-physical world presents limitless opportunities.”

The key to enabling this type of technology is creating self-powered sensors and computers, and creating a networked architecture for thousands of smart sensing devices – similar to the World Wide Web – that is accessible from multiple types of electronic devices available to users.

Jafari, director of the Embedded Systems and Signal Processing Lab and a member of the Texas Analog Center of Excellence (TxACE), has experience creating wearable computers and wireless systems that monitor different aspects of human, health, behavior and thought.

“One strength we have is that we not only build the theories, but also implement them,” he said.

Sechen, the other member of the UT Dallas TerraSwarm team, is an expert in building ultra-low power digital circuits.

STARNET Wallace-Jafari C or D: Dr. Roozbeh Jafari working with a student in his lab on health-related sensors in his Embedded Systems and Signal Processing Lab. We also have photos of Jafari with another student if needed.