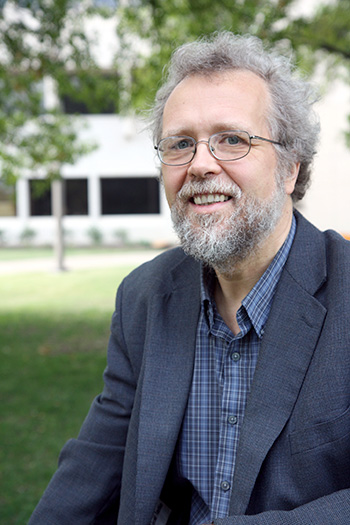 Dr. Raimund Ober and his team have found a method that minimizes the deterioration of images that can occur with conventional  approaches.

UT Dallas researchers are developing a new low-light imaging method that could improve a number of scientific applications, including the microscopic imaging of single molecules in cancer research.

Electrical engineering professor Dr. Raimund Ober and his team recently published their findings in the journal Nature Methods. In the journal, they describe a method which minimizes the deterioration of images that can occur with conventional imaging approaches.

“Any image you take of an object is translated by the camera into pixels with added electronic noise,” Ober said. “Any distortion of an image makes it harder to obtain accurate estimates of the quantities you’re interested in.”

This method could greatly enhance the accuracy with which quantities of interest, such as the location, size, and orientation of an object, are extracted from the acquired images.

Ober and his team tackled this problem by using the EMCCD camera (a standard low-light image detector) in a highly unconventional setting. Using this method, scientists can estimate quantities of interest from the image data with substantially higher accuracy than those made with conventional low-light imaging.

“We have figured out through rigorous theoretical developments that when you run an EMCCD camera in such a way that very few photons hit each of its pixels, the resulting image is minimally corrupted by the camera noise,” he said. “Our method is about using the EMCCD camera to its fullest potential, beyond what is commonly believed to be possible by the scientific imaging community.”

“Our method is about using the EMCCD camera to its fullest potential, beyond what is commonly believed to be possible by the scientific imaging community.”

By increasing the magnification of the image to reduce the number of photons detected in each image pixel, they were able to significantly reduce the camera noise and considerably lessen the deteriorative effect of pixilation.

In fact, the team managed to attain particle localization accuracy that was twofold higher than those obtained with conventional EMCCD imaging.

Ober and his team applied UAIM (Ultrahigh Accuracy Imaging Modality) to the live-cell tracking of a standard protein marker for breast cancer. By being able to accurately follow the movement of the marker, valuable insights on the biology of breast cancer could be gained.

“The tracking of individual proteins represents an important way to study cancer and other diseases at the molecular level,” Ober said. “The applications of UAIM for diagnostics and research are promising.”

The work was funded by the National Institutes of Health and the Cancer Prevention Research Institute of Texas.