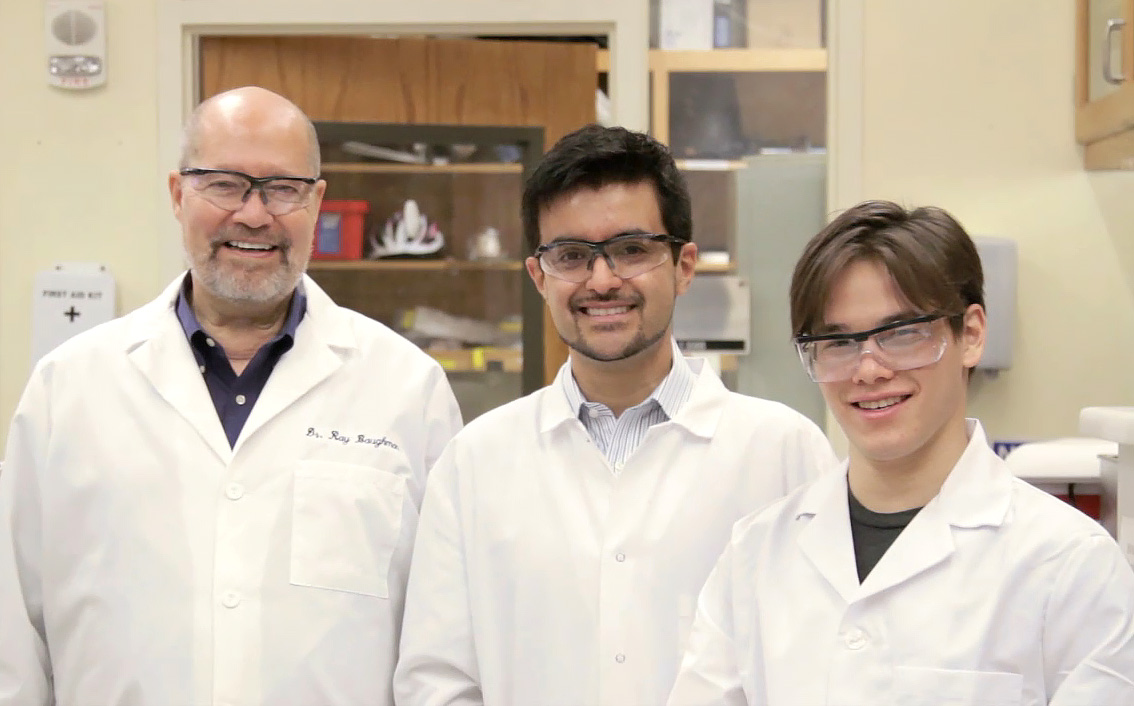 Dr. Ray Baughman (from left) led an international team of researchers, including Dr. Márcio Lima and Carter Haines, in developing artificial muscles that can lift 100 times more weight and generate 100 times higher mechanical power than human muscles of the same length and weight.

An international team led by The University of Texas at Dallas has discovered that ordinary fishing line and sewing thread can be cheaply converted to powerful artificial muscles.

In a paper published Feb. 21 in the journal Science, the researchers explain that the powerful muscles are produced by twisting and coiling high-strength polymer fishing line and sewing thread. Scientists at UT Dallas’ Alan G. MacDiarmid NanoTech Institute teamed with scientists from universities in Australia, South Korea, Canada, Turkey and China to accomplish the advances.

The muscles are powered thermally by temperature changes, which can be produced electrically, by the absorption of light or by the chemical reaction of fuels. Twisting the polymer fiber converts it to a torsional muscle that can spin a heavy rotor to more than 10,000 revolutions per minute. Subsequent twisting, so that the polymer fiber coils like a heavily twisted rubber band, produces a muscle that dramatically contracts along its length when heated, and returns to its initial length when cooled. If coiling is in a different twist direction than the initial polymer fiber twist, the muscles instead expand when heated.

The artificial muscles are powered thermally by temperature changes. They contract lengthwise when heated and return to initial length when cooled.

Compared to natural muscles, which contract by only about 20 percent, these new muscles can contract by about 50 percent of their length. The muscle strokes also are reversible for millions of cycles as the muscles contract and expand under heavy mechanical loads.

“The application opportunities for these polymer muscles are vast,” said corresponding author Dr. Ray Baughman, the Robert A. Welch Distinguished Chair in Chemistry at UT Dallas and director of the NanoTech Institute. “Today’s most advanced humanoid robots, prosthetic limbs and wearable exoskeletons are limited by motors and hydraulic systems, whose size and weight restrict dexterity, force generation and work capability.”

Baughman said the muscles could be used for applications in which  superhuman strengths are sought, such as robots and exoskeletons. Twisting together a bundle of polyethylene fishing lines, whose total diameter is only about 10 times larger than a human hair, produces a coiled polymer muscle that can lift 16 pounds. Operated in parallel, similar to how natural muscles are configured, 100 of these polymer muscles could lift about 1,600 pounds, Baughman said. 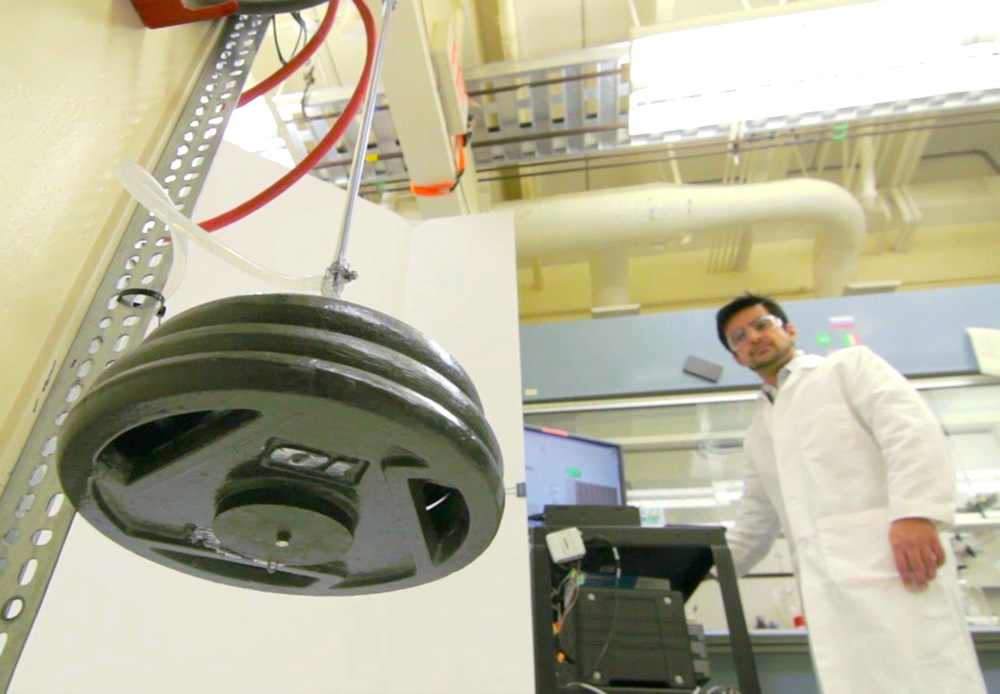 Lima demonstrates the muscles' strength. Operated in parallel, similar to how natural muscles are configured, 100 polymer muscles could lift about 1,600 pounds, Baughman said.

On the opposite extreme, independently operated coiled polymer muscles having a diameter less than a human hair could bring lifelike facial expressions to humanoid companion robots for the elderly and dexterous capabilities for minimally invasive robotic microsurgery. Also, they could power miniature “laboratories on a chip,” as well as devices for communicating the sense of touch from sensors on a remote robotic hand to a human hand.

The polymer muscles are normally electrically powered by resistive heating using the metal coating on sewing thread or by using metal wires that are twisted together with the muscle. For other applications, however, the muscles can be self-powered by environmental temperature changes, said Carter Haines, lead author of the study.

“We have woven textiles from the polymer muscles whose pores reversibly open and close with changes in temperature. This offers the future possibility of comfort-adjusting clothing,” said Haines, who started his research career in Baughman’s lab as a high school student doing summer research through the George A. Jeffrey NanoExplorers Program, which Baughman initiated. Haines earned an undergraduate physics degree from UT Dallas and is now a doctoral student in materials science and engineering. 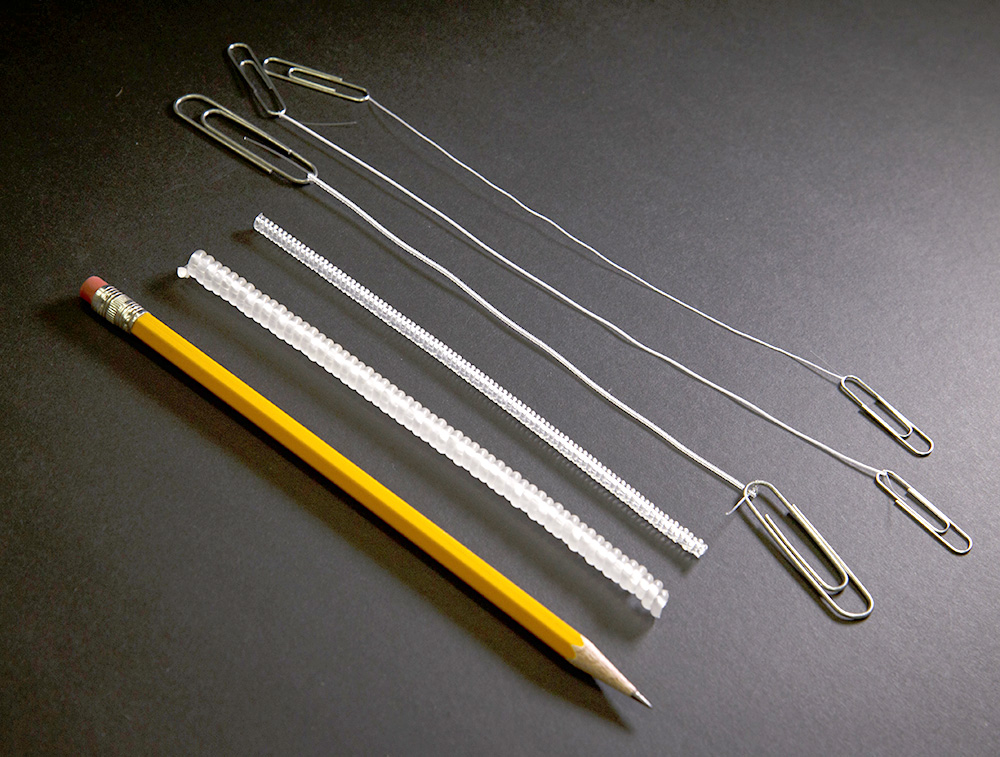 UT Dallas researchers have made artificial muscles in a variety of widths from ordinary polymer fishing line.

The research team also has demonstrated the feasibility of using environmentally powered muscles to automatically open and close the windows of greenhouses or buildings in response to ambient temperature changes, thereby eliminating the need for electricity or noisy and costly motors.

The research was principally funded by the Air Force Office of Scientific Research, with additional funding from the Air Force, the Office of Naval Research, the Robert A. Welch Foundation, the Creative Research Initiative Center for Bio-Artificial Muscle, the Korea-U.S. Air Force Cooperation Program, the Australian Research Council, the Australian National Fabrication Facility, a Canada Discovery grant, the China National 973 Project and NSF China.