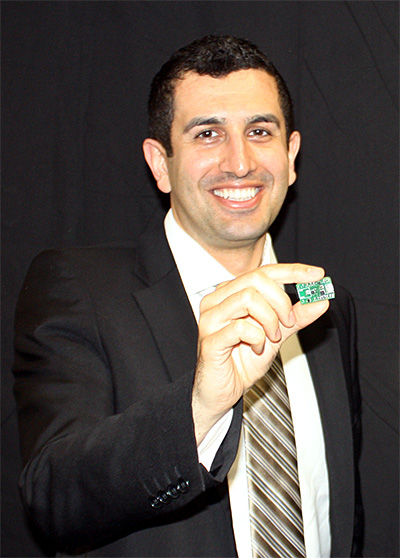 Dr. Roozbeh Jafari, assistant professor of electrical engineering at UT Dallas, is developing wearable wireless computers that are about the size of a button. At that size, the system can be easily worn on the body, opening possibilities to improved health monitoring for the elderly and assistance in determining changes in medication dosage needs.

For this innovative idea, Dr. Jafari received a 2012 National Science Foundation CAREER (Faculty Early Career Development) award. The highly selective program funds research of junior faculty members who are considered likely to become leaders in their fields. Recipients are selected on the basis of creative early development plans that effectively integrate research and education within the context of the mission of their respective institutions.

“Roozbeh Jafari has established a very dynamic, innovative laboratory in electrical engineering, that has bridged research challenges in brain-computer interfaces in a remarkable way,” said Dr. John Hansen, associate dean for research in the Erik Jonsson School of Engineering and Computer Science. “While he has an extensive group of skilled graduate students supported, he has also included many undergraduate and visiting high school students, which has enriched the experiences of many students in the Jonsson School.”

The key to making the portable systems smaller is eliminating the bulky batteries used to process data and designing the entire system to use power more efficiently. Jafari’s solution is to develop methods that would remove unnecessary data, saving energy to be used only for processing the most useful functions.

“Signals and events observed from the human body tend to change slowly,” said Jafari, director of the Embedded Systems and Signal Processing Lab and a member of the Texas Analog Center of Excellence (TxACE). “The physics and kinematics of the human body reduce the likelihood of random body signals and movements.” 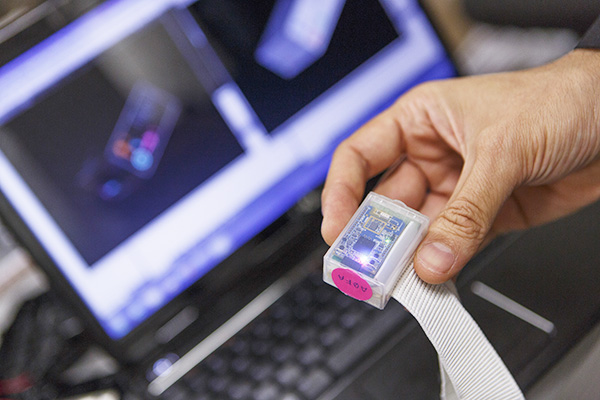 A wearable wireless sensor can detect precursors of falls. The system would be used for fall prevention in the elderly.

For example, if a wearable system is designed to detect precursors to falls in the elderly, the device wouldn’t require much energy to determine that the person were in a sitting position and not at risk.

Jafari’s research optimizes the use of power throughout the entire system, which includes biosensors that collect data from the human body and devices, such as microcontrollers, that process and communicate the information. The algorithms used could coordinate, manage and transmit information from various wearable computers. The amount of energy used by each biosensor could be targeted toward the sensitivity needed for the desired use.

While the applications of wearable computing systems are numerous, case studies suggest that fall prevention among the elderly and medication adjustments for people with Parkinson’s disease hold significant promise. The financial toll of falls is estimated to be $54.9 billion per year by 2020, according to a 2006 study. Those numbers don’t account for the fear of falling, which can lead to loss of confidence, restriction of physical activities and social isolation.

The positive effects of Parkinson’s medications often taper off, not lasting from one dose to the next. Currently, about 1 million Americans suffer from Parkinson’s disease, and that number is expected to triple in the coming decades, according to a 2008 study.

“Growing demand for health-care monitoring applications requires students, engineers and healthcare professionals to design, develop, deploy and operate wearable systems,” Jafari said. “I am quite pleased to work with my excellent graduate and undergraduate students at UT Dallas to enable the next generation of wearable computers.”