Recent research on how people learn to become experts can help to dramatically improve the effectiveness of science, technology, engineering, and mathematics (STEM) education, according to an article in the fall 2012 Issues in Science and Technology.

Nobel laureate Carl Wieman argues that despite the widespread recognition of the importance of STEM education and countless efforts aimed at improving it, there continues to be little discernible change in either student achievement or student interest in STEM. 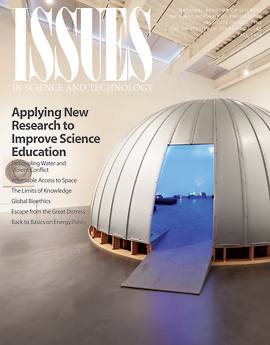 “This is unfortunate,” he writes, “because there is an extensive body of recent research on how learning is accomplished, with clear implications for what constitutes effective STEM teaching and how that differs from typical current teaching at the K-12 and college levels. Failure to understand this learning-focused perspective is also a root cause of the failures of many reform efforts.”

The fall 2012 Issues also includes a report on research that finds that test-based incentives have had only small effects, and in many cases no effect, on student learning. A National Research Council study committee examined evidence on the effectiveness of the full range of incentives programs, including those that sanction schools whose students do not perform well on standardized tests, those that award bonuses to teachers if their students’ test scores climb, and those that target the incentives to students themselves by requiring them to pass an exit exam before receiving their diploma.

“Although the study’s findings do not necessarily mean that it is impossible to use incentives successfully,” writes Stuart Elliott, “the small benefits they have produced so far suggest that they should be used with caution and carefully evaluated for effectiveness when they are used.”

The article recommends a path of careful experimentation with new uses of incentives, combined with a more balanced approach to educational interventions.  “Evidence does not support staking so much of our hope for educational improvement on this single method,” says Elliott. “Rather, it suggests that we should be moving some of our eggs out of the incentives basket and into other complementary efforts to improve education.”