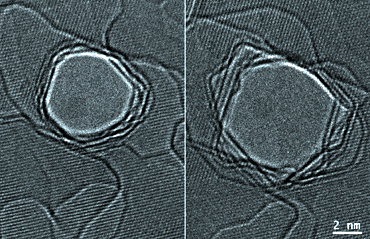 These are transmission electron microscope images of a nanopore in graphene. The original pore on the left grows considerably under the influence of the electron beam. The image on the right is the pore after four minutes at 800 °C.  Pores either shrink or grow depending on the temperature and electron beam irradiation.

Engineers at The University of Texas at Dallas have used advanced techniques to make the material graphene small enough to read DNA.

Shrinking the size of a graphene pore to less than one nanometer – small enough to thread a DNA strand  – opens the possibility of using graphene as a low-cost tool to sequence DNA.

“Sequencing DNA at a very cheap cost would enable scientists and doctors to better predict and diagnose disease, and also tailor a drug to an individual’s genetic code,” said Dr. Moon Kim, professor of materials science and engineering. He was senior author of an article depicted on the cover of the September print edition of Carbon.

The first reading, or sequencing, of human DNA by the international scientific research group known as the Human Genome Project cost about $2.7 billion. Engineers have been researching alternative nanomaterials materials that can thread DNA strands to reduce the cost to less than $1,000 per person. 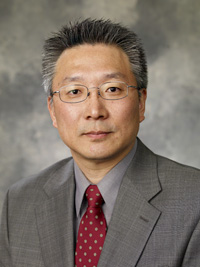 Dr. Moon Kim, professor of materials science and engineering, was the senior author of the article.

It was demonstrated in 2004 that graphite could be changed into a sheet of bonded carbon atoms called graphene, which is believed to be the strongest material ever measured. Because graphene is thin and strong, researchers have searched for ways to control its pore size. They have not had much success. A nanoscale sensor made of graphene could be integrated with existing silicon-based electronics that are very advanced and yet cheap, to reduce costs.

In this study, Kim and his team manipulated the size of the nanopore by using an electron beam from an advanced electron microscope and in-situ heating up to 1200 degree Celsius temperature.

“This is the first time that the size of the graphene nanopore has been controlled, especially shrinking it,” said Kim. “We used high temperature heating and electron beam simultaneously, one technique without the other doesn’t work.”

Now that researchers know the pore size can be controlled, the next step in their research will be to build a prototype device.

“If we could sequence DNA cheaply, the possibilities for disease prevention, diagnosis and treatment would be limitless,” Kim said. “Controlling graphene puts us one step closer to making this happen.”

The study was funded by the Southwest Academy of Nanoelectronics, Air Force Office of Scientific Research and the World Class University Program.