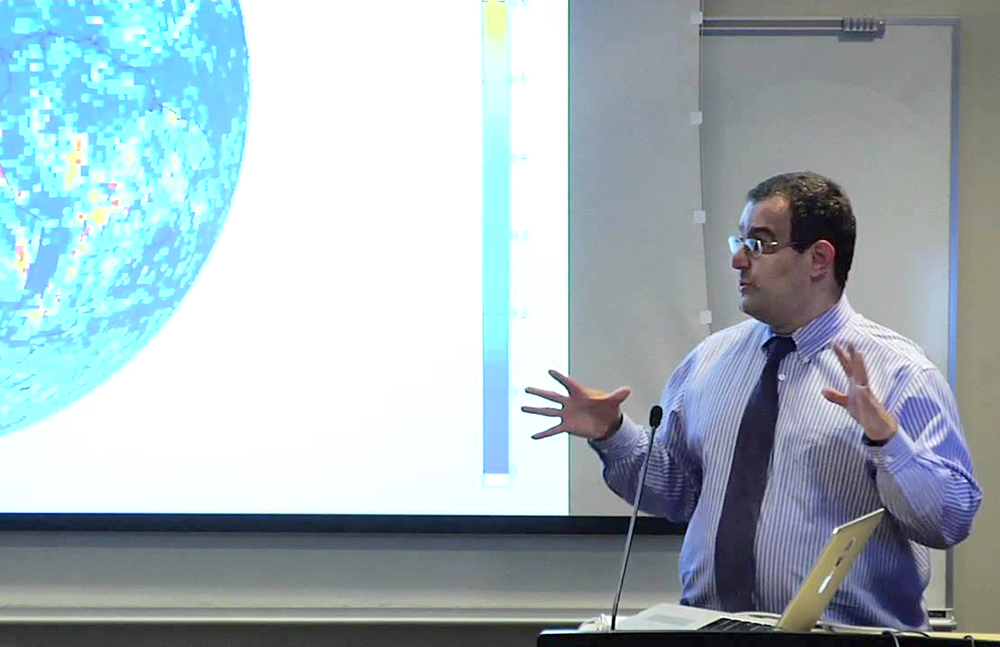 A researcher at The University of Texas at Dallas is combining plant biology with massive data from Earth-orbiting satellites to help inform the conversation about a critical economic and societal issue: water resources management.

Dr. David Lary, associate professor of physics at UT Dallas, applies his expertise in remote sensing and sophisticated computer techniques to extract useful information from very large data sets. In one project, his aim is to correlate such “big data” to water usage in a given geographical area.

“When most people think about water management, they don’t think about remote sensing or data from satellites,” Lary said.

In Texas and other U.S. states, the demand for water from industry and growing populations continues to rise, even as severe drought limits or threatens supplies.

According to the Texas Water Development Board, the total water capacity of reservoirs in Texas has stayed fairly constant over the past 20 years or so. While the state’s reservoirs are about 64 percent full, some areas in Texas’ northwest and central regions are critically low. 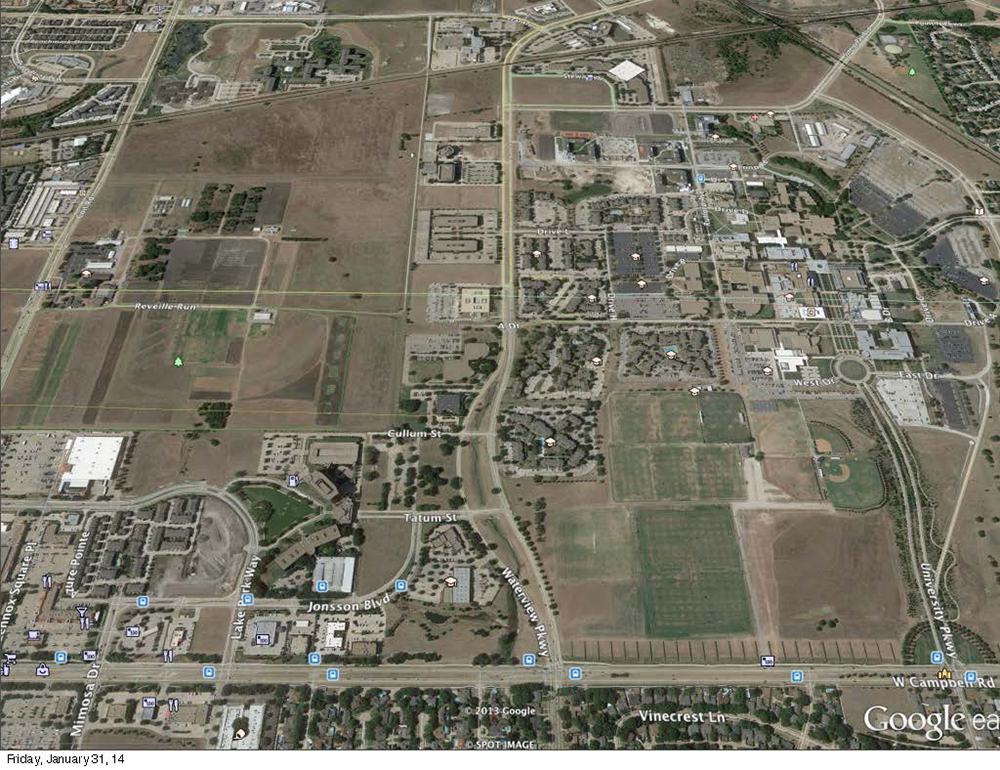 A satellite image shows UT Dallas on the right side of the frame and areas to the west of campus on the left. 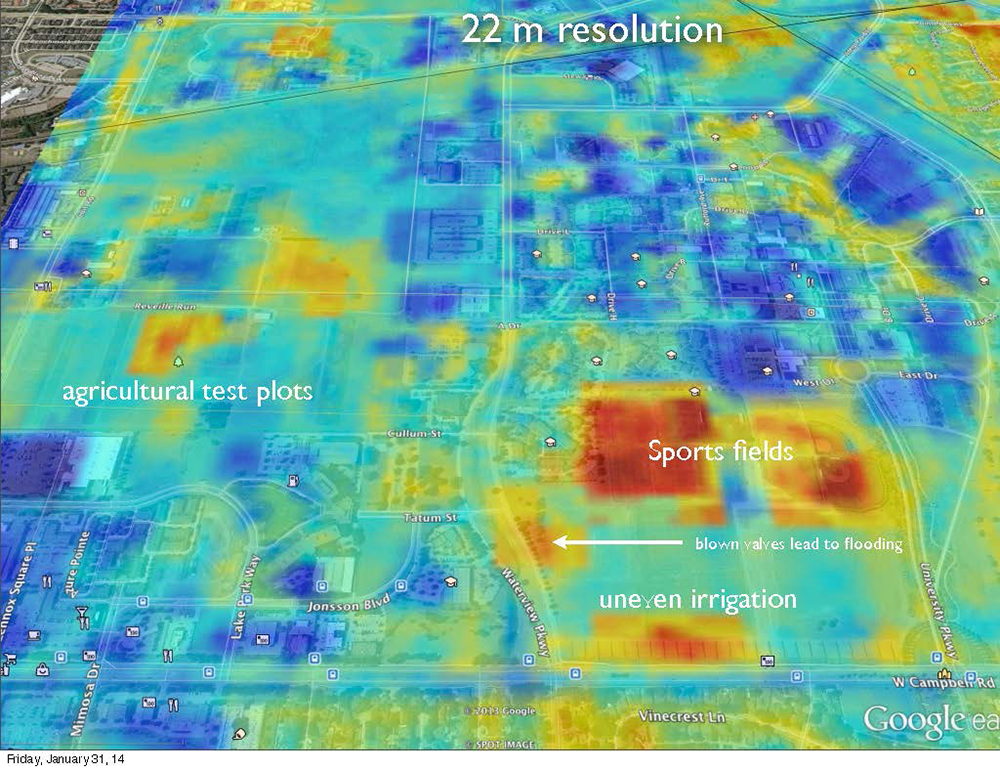 The second image shows areas of highest chlorophyll levels, and hence healthier plant life, in red and yellow, and low chlorophyll levels in blue. The plant-health data serves as a proxy for levels of water usage.

In North Texas, the region’s population is expected to double in the next 30 to 40 years, according to projections by the Texas State Data Center and the Office of the State Demographer. Lary noted that even if a new reservoir in this region were authorized today, it could take many years to build given the current regulatory process.

“Our population is set to double, and on top of that we have issues with ongoing drought in many regions of the state. We need to be doing something intelligent to deal with this problem and take steps to ensure Texans have an adequate supply of water in the coming years and decades,” Lary said.

“For example, to boost conservation efforts, it would be invaluable to have more efficient irrigation control, whether it’s for college campuses, golf courses, parks or our own backyards. It would be all the better if we could use an existing infrastructure to do this.”

Since 1972, NASA has had that infrastructure in the sky. Earth-orbiting Landsat satellites armed with cameras gather information about Earth’s surface, and NASA makes the data available to the public. These satellites provide not only visible images of the planet, but they also gather data from the near-infrared region of the spectrum, which measures heat. The Landsat sensors have a moderate spatial resolution, which means they can make out large man-made objects such as highways, but individual houses are barely discernible.

To track water usage, Lary uses satellite data to measure how much light is reflected from the Earth’s surface in each of three light wavelengths: red light, green light and the near-infrared. A chemical produced in plants called chlorophyll absorbs certain wavelengths of red light, including one of those measured by the Landsat satellites.

“Texas is growing rapidly, and we’re facing some significant needs. Increasing our water efficiency could be a step toward coping with the issue, and it would be great if the North Texas region took the lead in this type of innovative approach.”

“We can differentiate between wavelength regions where chlorophyll absorbs light and a region where it does not,” Lary said. “This allows us to get a metric of the chlorophyll absorption, and by inference, whether the plants aren’t doing so well from lack of water.”

To demonstrate the technique, Lary overlaid visible satellite images showing vegetation on the UT Dallas campus with chlorophyll absorption data from the same region. The result showed an area of trees receiving uneven irrigation, as well as an area of overgrowth where a temporarily malfunctioning valve had led to flooding.

Lary said that municipalities using such techniques could deploy a weekly remote sensing inspection to help identify areas of overwatering or burst pipes, as well as to optimize irrigation patterns and automated sprinkler systems.

Community leaders are taking notice of Lary’s approach. The North Texas Commission recently invited him to present his work at the 2014 North Texas Water Summit, which brought together leaders in business, industry experts, elected officials and academics to discuss the region’s growing water needs. Lary also has been invited to give a talk about his research April 26 at Earth Day Texas, an annual environmental expo held at Fair Park.

“Texas is growing rapidly, and we’re facing some significant needs,” Lary said. “Increasing our water efficiency could be a step toward coping with the issue, and it would be great if the North Texas region took the lead in this type of innovative approach.”