Prof Explores Universe Through Gravity Lens Studies
A $222,000 Research Grant Will Support Study of the Cosmos and Dark Matter

The National Science Foundation recently awarded Dr. Mustapha Ishak-Boushaki, associate professor of physics at UT Dallas, a $222,000 research grant for his investigations of the gravitational lensing technique used to study the nature of the universe. 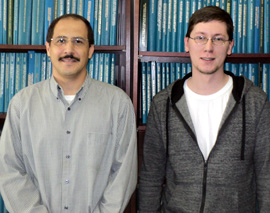 His studies are aimed at improving the technique to more accurately measure the distribution and density of mass in the universe. His research also could contribute to a better understanding of dark matter, a type of matter thought to be about five times more prevalent than ordinary matter that can be seen through telescopes.

Gravitational lensing also can be used to test cosmological models of the universe.

“Gravitational lensing is one of the most powerful tools we have to study the cosmos,” Ishak-Boushaki said. “We use it to detect and map not only regular matter, but also dark matter according to the gravitational effects each type of matter has on light and radiation. Gravitational lensing also helps us to investigate how galaxies form and why the expansion of the universe is accelerating.”

Dark matter is invisible to astronomers because it does not emit or absorb enough light or radiation to be detected. Scientists can estimate its whereabouts, however, by observing how it affects objects they can see.

“Gravitational lensing is one of the most powerful tools we have to study the cosmos. We use it to detect and map not only regular matter, but also dark matter according to the gravitational effects each type of matter has on light and radiation.”

One of the effects of dark matter is gravitational lensing. Here is how it works:

In space, very massive objects distort and curve the fabric of space around them. This is akin to what happens when a bowling bowl is placed on a trampoline – the fabric distorts and forms an indentation that pulls in any object that gets too close to the bowling ball. We feel the curvature of space around the Earth as the force of gravity.

In gravitational lensing, light waves and other types of radiation traveling toward us from very distant galaxies or clusters of galaxies are bent and distorted as they follow the curved space surrounding massive objects that block our direct line of sight.  By the time the light from a background source reaches our eyes, this lensing effect can smear the light out into an arc, magnify it or make it appear as multiple images.

Even if the intervening massive object cannot be directly seen – if it is dark matter – astronomers can gather critical information about both the obstruction and the distant object behind it based on an analysis of the distorted light signals.

“The NSF grant will allow our team to investigate new theoretical and numerical techniques that should help refine the signals received on Earth from deep-sky objects affected by gravitational lensing,” Ishak-Boushaki said.

He said the grant will  support the work of physics graduate student Michael Troxel, who has worked on the project.

“New weak-lensing measurements will in part allow us to better understand the nature of cosmic acceleration and to test gravity on cosmological scales,” Troxel said. “To realize the full potential of this exciting tool, however, we have to understand better the contaminants to the lensing signal.”